Canada had a strong day at round two of the Mountain Bike World Cup in Houffalize, Belgium, with world champion Catharine Pendrel (Luna) winning the women's cross-country and Geoff Kabush finishing 11th in the men's race.  Pendrel's victory - ten years after fellow Canadian Alison Sydor won here - puts her into the lead of the World Cup series.  Two other Canadian women finished in the top-15:  Emily Batty (Subaru-Trek) in seventh, and Marie-Helene Premont in 14th place.
Women   Photos
Pendrel, who was third on the opening round of the World Cup last month in Pietermaritzburg, South Africa, took the lead from defending World Cup champion Julie Bresset (BH SR Suntour Peisey Vallandry) in the third lap of the five lap race with an attack on one of the climbs.  The French rider had come through the start loop in the lead, but Pendrel quickly joined her.  She steadily increased her lead through the remainder of the race to finish 48 seconds ahead of Bresset.  Maja Wloszczowska (CCC Polkowice), the winner of the first round of the 2012 series, fought back from a poor start that saw her drop out of the top-ten on the opening loop to finish third. 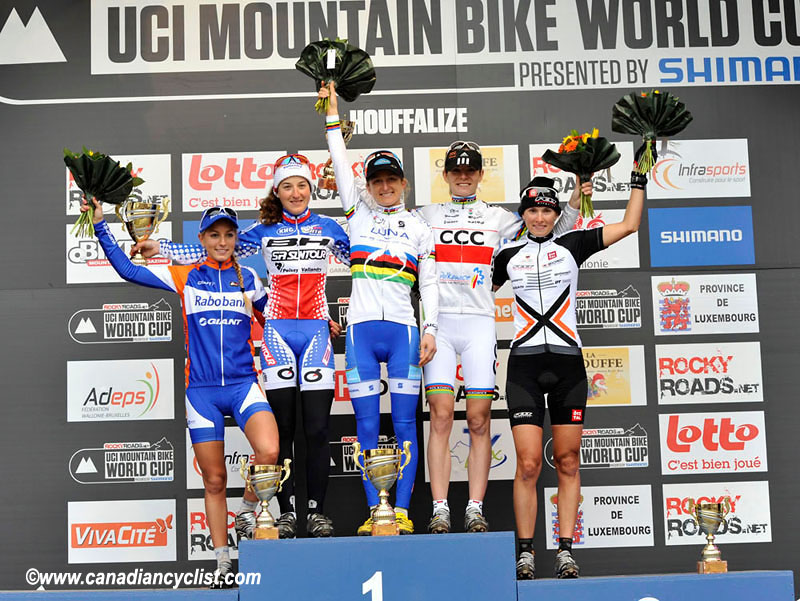 "I just felt awesome today," stated Pendrel.  "It was a good course, I really liked it. It felt a lot like my trails at home, and definitely had steep climbs.  There was one section that I knew Julie [Bresset] was really strong on, so my focus of the race was riding that section as smooth as I can, and then just go as hard as I could on the climbs.  Ten years ago, Alison Sydor won here, so it was good to finally get a Canadian win again."
"The support here is amazing, there is so much good energy out there.  The weather was cooperative, it all just came together for me today."
Pendrel and Wloszczowska are tied at 410 points each, however, Pendrel takes the lead in the World Cup by virtue of the more recent victory.  Bresset moves into third, just ahead of Emily Batty, second in the opening round.
Women's results
[Note:  We have interviews with Pendrel, Batty and Premont that will go up soon]
Men   Photos to come
In the men's six lap race, Julien Absalon took his third Houffalize title, finishing with a time of one hour, 34 minutes and 42 seconds.  Nino Schurter (Scott-Swisspower), the winner of the first round, was second at 38 seconds, with Marco Fontana (Cannondale Factory) third, one minute and three seconds in arrears.  Absalon and Schurter broke away from the rest of the field by the second lap, and then Absalon dropped his Swiss rival in the final lap to solo in for the win.
"I was feeling good, but I was thinking "Okay, I need to attack Nino before the last lap, because I know he is always strong on the last lap".  I knew there was no chance to win after that, because I knew he is faster than me on the last downhill.  So my tactic was to attack before the downhill, so I attacked on the fifth lap.
"Houffalize in incredible, all the spectators, lots of fans from France and Belgium behind me, so maybe that is why I push like this.  I am really happy because it is always special to win in Houffalize."
Kabush rode most of the race in ninth or tenth place before fading slightly in the final lap, finishing 3:05 behind Absalon.
"It feels good to be back riding in the top-ten," commented Kabush.  "I got a really good start, which was crucial, and then I just concentrated on riding as consistently as I could.  The steep climbs here don't necessarily suit me, but I'm really happy with the way I rode, and that this will give me a much better start position for the next round."
Schurter continues to lead the World Cup with 450 points, followed by Absalon at 400 points.  Burry Stander (Specialized) sits in third place with 350 points.  Kabush improved from 37th to 23rd in the rankings, with 122 points.
[Note:  We have an interview with Geoff Kabush that will go up soon]
Men's results
Fatal error: Uncaught Error: Object of class PDO could not be converted to string in /home/canadiancyclistcom/canadiancyclist.com/public/modules/news.php:528 Stack trace: #0 /home/canadiancyclistcom/canadiancyclist.com/public/modules/news.php(517): getrelatedgallery() #1 /home/canadiancyclistcom/canadiancyclist.com/public/dailynews.php(58): getDailyNewsArticle() #2 {main} thrown in /home/canadiancyclistcom/canadiancyclist.com/public/modules/news.php on line 528