Theo Bos of Rabobank took the win on the first stage of the Tour of Turkey, holding off a fast closing Matt Goss (GreenEdge) in a bunch sprint, with Daniele Colli (Sanofi-TT1) third.  For Canada's SpiderTech team it was a rough day with their two top sprinters crashing - Guillaume Boivin went down with about 40 kilometres to go, landing on his left wrist.  Keven Lacombe went down in a large pileup in the final three kilometres and did not actually finish, hitting the fencing, but was given the bunch time, as was the entire field except Boivin.

At this time, Boivin's reported condition is sprain/strain of the left wrist, and it is painful to move, so whether or not he will start tomorrow is unknown, although Team Director Steve Bauer says that it is unlikely.  Lacombe's injuries looked much worse then they turned out to be, when he was carted off to the hospital with in a neck brace with a bloody face.  However, according to Bauer, he has a broken nose, stitches to a cut above his nose and a small fracture of his C7 vertebra.  While he will remain overnight in the hospital for observation, his condition is not serious enough to require intensive care.

The 135 kilometre, eight lap race through the resort town of Alanya saw a group of seven riders break away on the first lap, including SpiderTech's Will Routley.  The group went over five minutes clear from a disinterested peloton, but by the halfway point the gap started to shrink quickly, as the teams of the sprinters upped the pace.  The break was caught with just over a lap to go. 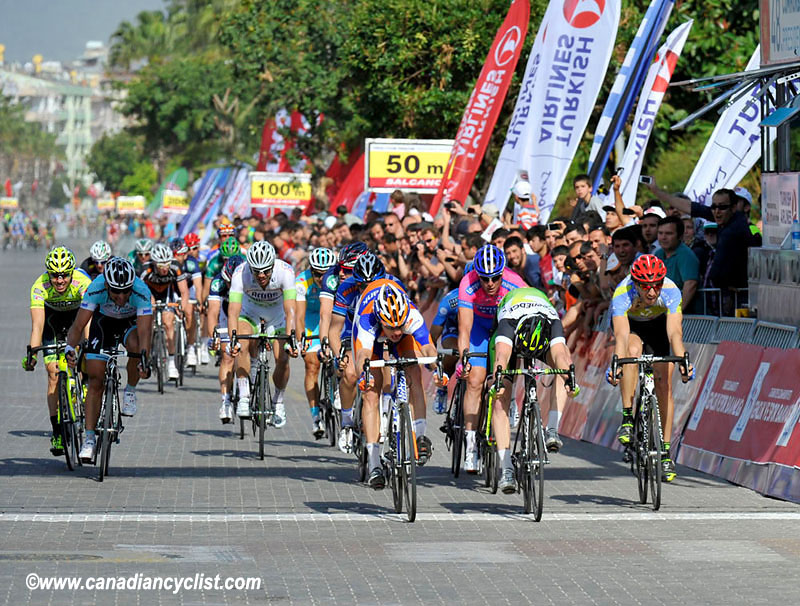 Bos and Goss hit the line

This, of course, led to considerable jockeying for position, as teams tried to set up their sprint trains.  No team was entirely successful, but Rabobank put the extremely powerful duo of Graeme Brown and Mark Renshaw in front of Bos, with Brown taking a long pull in the final kilometre and a half before handing over to Renshaw.  GreenEdge was at the front when Goss hit the lead at 200 metres to go, with Bos on his wheel, and Bos came up Goss's right side to challenge with less than 50 metres to go, winning by centimetres.

Bos takes both the turquoise leader's jersey and the green sprint jersey into tomorrow's 152 kilometre stage west along the coast to Antalya from Alanya.