Canadian road cyclist Ryder Hesjedal of Victoria, British Columbia (Garmin-Barracuda) made Canadian sport history today by becoming the first Canadian cyclist to ever wear the famous Pink jersey, a distinction awarded to the overall leader of the general classification at the Giro d’Italia.

Hesjedal finished fifth on the seventh stage at the Giro d’Italia, and now leads the overall standings with the performance. 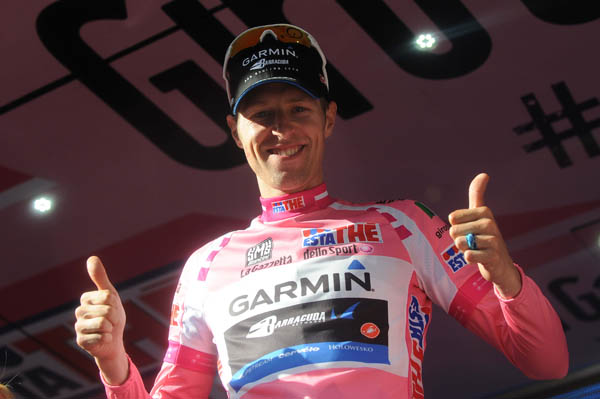 “This is a great result. Wearing the Pink jersey is what every rider thrives for at the Giro d’Italia. Having a Canadian wearing the pink jersey is an indicator that Canada is getting stronger as a cycling nation. Every cyclist and cycling fan in Canada should be proud of the accomplishment,” said Landry.

Canadian cycling legend Steve Bauer, currently directing Team SpiderTech powered by C10 at the 2012 Amgen Tour of California, which starts tomorrow, was the closest Canadian to the Pink Jersey. Bauer previously missed the pink jersey by only 0.3s, in an opening prologue.

“It’s awesome, certainly a landmark accomplishment. It shows the progress of our nation. Ryder is without a doubt a leader in the progress, on a large scale. It gives the inspiration of the guys on Team SpiderTech and everyone in Canada to do the same. It’s long overdue, and great to see,” said Bauer.