Next Sunday, May 20th, twenty-one Canadian soldiers, who are members of the WoundedWarriors.ca bike team, will ride Cervélo S2’s as they participate in the Big Battlefield Bike Ride through France and Belgium. 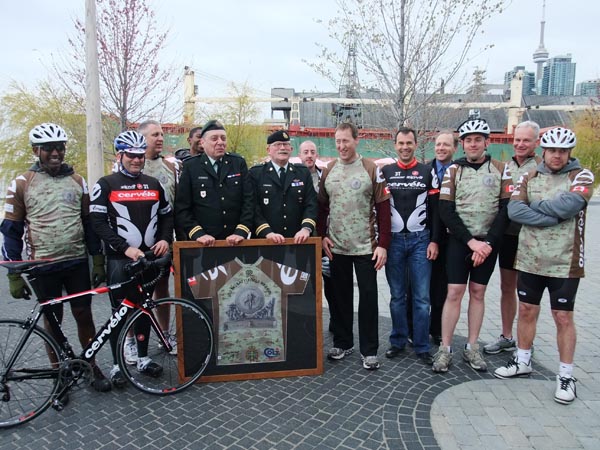 The Honourable Peter MacKay, Minister of Defense along with Phil White, Cervelo CEO  after a morning training ride with the Canadian Army's WoundedWarriors.ca team. Cervelo's Glenn Innes (front 2nd) will be accompanying the team. The bike team will be riding across the battlefields of France this May on their S2's, to promote mental health awareness and recovery through physical fitness.

This is the first time Canadian soldiers have participated in this six-day, 550-kilometre event. They will be joined on the ride by soldiers from Britain’s Hope for Heroes, all riding with one purpose - to increase awareness of and to decrease the stereotypes around mental health issues. The soldiers on the WoundedWarriors.ca team are participating as part of their own recovery therapy from Operational Stress Injuries (OSI).

Capt. Mark Chamberlain served seven months in Afghanistan and readily admits he suffers from operational stress injuries (OSI). Now he’s preparing for the bike tour in Europe. “Combat and mental injuries aren’t something to be ashamed of,” he said. “Together as a team [of soldiers] we can get through these types of things.

The six-day journey will lead the veterans through famous battlefields in France, such as Caen, Dieppe, Amiens, Arras, Ypres and Dunkirk. During the tour, the vets will attend a special ceremony at Vimy Ridge highlighting the journey.

Capt. Wayne Johnston is the founder of Wounded Warriors and says there is more than one reason for this bike tour in Europe. “Generally guys with OSI start to lose their own self worth and their own focus on life,” he said. “You go every week to see your psychologist. You take your pills everyday sometimes wondering when am I going to get off this. What this ride has done for the individuals is given them focus and helped them to build back their self-pride and self-worth. When these guys get together they’re blooming. I don’t know how else to describe it,” Johnston said.

“Cervélo became involved when we were asked by our Engineering Manager, Michael Clarry, who is also a Lieutenant Colonel and the Commanding Officer of 32 Combat Engineer Regiment,” said Phil White, Co-founder, CEO, Cervélo. “We consider it an honor to have these soldiers riding Cervélo’s to promote mental health awareness and recovery through physical fitness.”

That is also how Glenn Innes, the Cervélo Territory Manager in Ontario felt when he volunteered to accompany the soldiers on a training ride – “just to help them out with their new bikes.” Glenn and the soldiers bonded, and impressed with his attitude and manner, they invited him to ride as their guest on the Big Battlefield Bike Ride. “I am truly honored by the gesture and also very excited about participating,” he said.

You can follow the progress of the WoundedWarriors.ca via Glenn’s blog that will be posted online during the six-day tour.

To donate or support a rider: woundedwarriors.ca.

Are you looking for a way to save money on auto insurance? We've taken the mystery out of this confusing subject by outlining 10 simple steps to saving money while getting the best coverage for yourself and your car. Welcome:
http://www.auto-inf.com/category/insurance