The Specialized-lululemon team finished atop the podium again today at the Grand Prix Cycliste Gatineau. This time it was German national champion, Ina-Yoko Teutenberg, who claimed the victory for the team in the ten-lap, 132.34 kilometre road race.  Australian Rochelle Gilmore (Faren Honda Team) was second, just edging out Alona Andruk (Ukrainian National Team) in sprint finish. 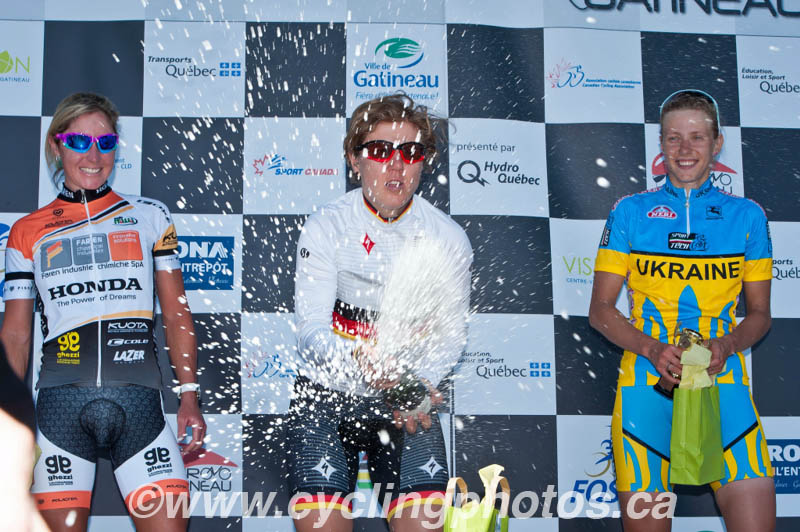 “We have a really competitive field,” Teutenberg said after the race. “I mean we have so many European teams here. It was a hard race - people were going for it.”

Joelle Numainville (Optum Kelly Benefits) was the top Canadian in the race, finishing just shy of the podium in fourth.

“Of course I would have liked to be on the podium," commented Numainville, "but I bridged to the lead group with two laps to go and that was really hard. It cost me a lot.”

Numainville said that her team worked really hard for her and that everyone gave their one-hundred-and-fifteen percent effort today. Numainville’s teammate Lex Albrecht said that a crash in the last couple kilometres of the race upset their plan to lead Numainville into the sprint.

“That kind of messed up our plans to help Joelle towards the very very end. The goal of the day was the victory but I mean that’s bike racing. We did our best,” explained Albrecht.

Three-time World Champion Tara Whitten (Team TIBCO) had a gap of up to one minute and forty-five seconds off the front of the peleton after breaking away from the group at the five-kilometre mark.

“My plan was to try and get in an early breakaway and, unfortunately, I was hoping for a few other people to work with, [but] nobody came with me. But the gap was opening and so I thought I’d just go for it,” Whitten said.

Whitten was unable to sustain the individual effort and ended up dropping out of the race after she was caught.

The Specialized-lululemon team decided not to go with Whitten’s break, or any other early breaks because of the heat and the length of the race.

“It’s a really long race. I think none of us has really raced in the heat. I mean I’ve been in the heat in the last couple weeks so it’s a bit different, but Europe was so cold all of April. So I think it was a bit of a shock for the system,” Teutenberg said.

She added that the course was harder than it seemed. “It’s a deceiving course,” she said. “It doesn’t really look that hard but it hurts after a while. And especially when you’re off the front, you have to push really hard. So we said we won’t start until halfway through the race.”