Surrounded by a country celebrating its birthday, the winners of the opening day at the BC Bike Race started their seven-day journey through epic BC singletrack.

Barry Wicks, and Wendy Simms (Kona Bikes) won the opening stages of the 2012 BC Bike race in very different fashions. Simms came across the line without a close competitor while Wicks was forced into a three-man sprint against Neil Kindree (Specialized/ EMD Serono) and last year’s winner Chris Sheppard (Rocky Mountain Bikes). 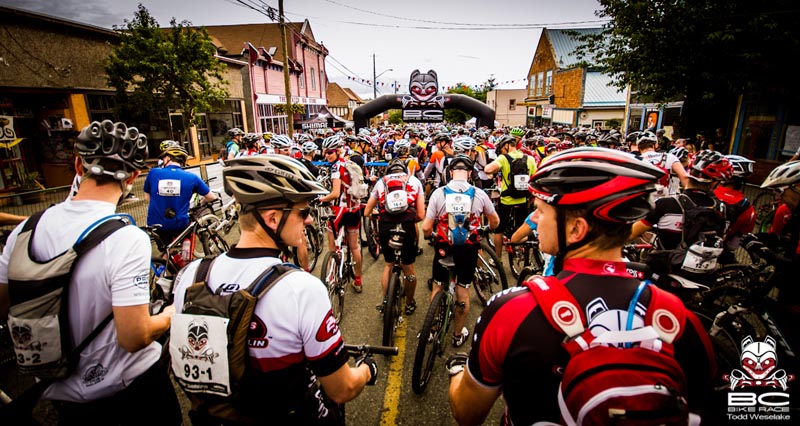 Stage one BCBR
On Canada’s birthday, the Cumberland Marching Band and a Helicopter from the Canadian Air Force Base at Comox arrived before the start to pump up the racers and give them an idea of how much the community supports this annual traveling circus. After being fed breakfast and picking up their bikes, riders stood under the watchful eye of BOB, Bear on Bike, the BC Bike Race mascot and waited nervously for their week of riding the best trails in the world to start. An overcast sky held its threats and left the weather at a perfect racing temperature all day. Course Designer, Trail Builder and Riding Fool Hostel owner Jeremy Grasby watched as the field left from the main street of town directly in front of his building, the racers on their way to see the result of hours of trail work from the United Riders of Cumberland (UROC) trail building association.

Rain the day before knocked down the dust and gave riders a few slick roots but mostly the greatest dirt Vancouver Island has to offer. For the day’s winner Barry Wicks, it was “That perfect loamy wet dirt that you can just push so hard through the corners. You feel like a superhero!”


How the Men’s race unfolded:
After riding in a group of 15 for the first 16 kilometers of the 54k day, Wicks, Kindree, and Sheppard separated themselves from the group as the riders started testing each others legs on the ten kilometer climb up to Forbidden Plateau. The trio came into the first aid station together, but Sheppard got a 20 second gap out of the exit. Less than 2km later he ducked into the Two Shieks and a Dog trail alone on his way to the start of the first Gravity Enduro section sponsored by Fox Shox. Wicks and Kindree were able to close the gap before the bottom and all three emerged together and stayed glued through the next hour of the race. None of the three could shake the other through the epic trails; Tea Pot, Crafty Butcher, Black Hole or Space Nugget.

It wasn’t till the open stretch to the finish line that Wicks managed to stretch out the group for the win. Kindree popped across the line a second later with Sheppard pulling through minus two more seconds.

“It’s gonna be exciting, fireworks all week.” Wicks commented after crossing the line.

With six days to go, an epic battle is shaping up between the defender Sheppard, the local Kindree, and the adopted local Wicks. Still, a week is long enough for another rider to come into form or get accustomed enough with the trails to threaten as they put more miles behind them. Carter Hovey (Mongolia Bike Challenge/ Orbea) nailed a 4th place, while Guido Thaler (Austria)  and Daniel Gathof (Germany) of Craft/ Rocky Mountain, who have never ridden British Columbia had respectable placings of 5th and 6th. Enduro specialist Josh Carlson (Giant Factory Off-Road) bit off his first chink of the BC Bike Race and proved he’s got enough legs and lungs to earn his 7th place of the day.

The Women’s Race:
Wendy Simms (Kona Bikes) wasted no time stamping her name on the BC Bike Race. Second place went to Alex Robinette (Bicycle Sport Shop), while New Zealander Hannah Thorne rolled in less than a minute behind. It looks as if the big fight could be for the one-two position on the podium.

Pre-race challenger Sonya Looney (Topeak/ Ergon) missed a turn early in the descent off of Forbidden Plateau and lost valuable time back-tracking to the course. “I was expecting to be about 10 minutes behind Wendy, and I’m disappointed to have lost so much time today.” With six days left Looney’s race for a podium spot is far from over and she has proven her fighting spirit in past stage races, so she can’t be counted out of the mix.

Gravity Enduro Day 1:
In the Race within the Race the two Gravity Enduro stages of the day created new winners of the day. For the men, three riders who were not challenging for the day’s overall win managed to show off their bike handling skills. Andreas Hestler (Rocky Mountain Bikes) won the second Gravity Enduro section sponsored by Red Bull while Josh Carlson took the first GE section sponsored by Fox Shox. Overall Josh took the day’s cumulative win by a slim 10 seconds. Ross Schnell (Trek Bikes) was only another seven seconds back.

For the women, Wendy Simms (Kona) took the first GE timed section, while Megan Rose got the second section by enough to be overall champion.


Men’s Team of Two:
Jason Sager and Thomas Turner of Jamis Bikes took a solid lead in the Men’s Team of Two category with ten minutes over the second place team of Kevin Calhoun and Keith Stark (Rocky Mountain Factory Team 2) and a top ten overall finish. Sager and Turner came across the line in a good mood, excited about the trails. “This is sort of hero dirt. It looks scary but you can just let it go! We are going to school every day here.”

Monday: BC Bike Race Day Two
Day Two goes to Campbell River where racers will find their tents located next to the  beach on the scenic Straight of Georgia before they head out to explore 50km of singletrack on a mature trail network in the Snowden Demonstration Forest and the Lost Lake area.