A tie in the men’s field
Simms continues dominance of women’s field.

Campell River hosted day two of the BC Bike Race under the wettest conditions in race history. With a police escort, 525 spirited racers left from the Robert Ostler Park under a steady drizzle of rain. After a neutral start the police escort pulled aside and an opening road section spread the field out before knobby tires turned on to the first trail of the day, Lost Frog.
It has been an unusually wet spring but today’s weather was actually normal winter riding conditions for locals. In some ways these conditions are the true coastal British Columbia riding experience. “We do live in a rain forest and today was classic west coast wet riding. The riders were awesome, people didn’t complain, they endured.” Event founder and director Deane Payne. “When people are sitting warm in the gymnasium, watching the wet photos, their smiles come out because it just reminds them of what they went through throughout the day.” 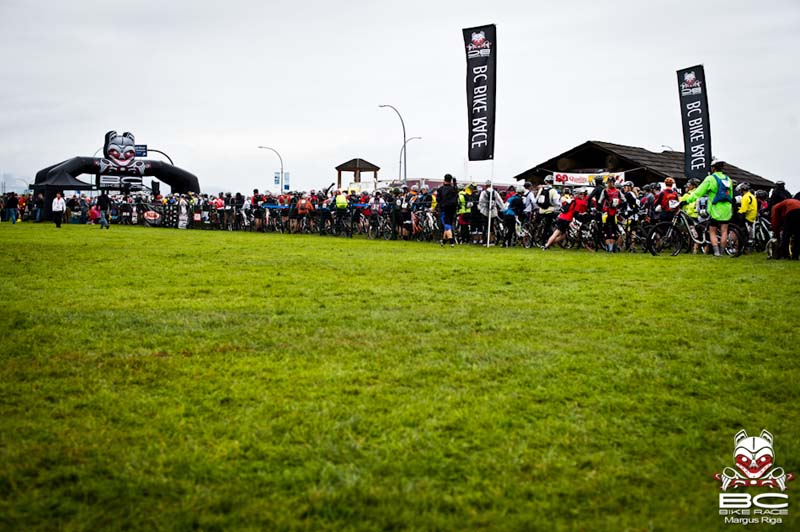 It was definitely a day that favored those with the most experience racing the wet conditions.

Women’s Solo Race
For local Wendy Simms (Kona Bikes) the only trouble she seemed to have from the wet day was worrying about her two kids back at home. Simms excelled enough in the mud and wet roots to put forty minutes on her closest competitors. Simms was excited about the trails despite their conditions. “The trails were amazing, Cumberland put on a great course!”

The women’s race of the day was between Hanna Thorne of New Zealand in second and Sonya Looney (Topeak/ Ergon) in third; less than two minutes back. Looney recovered from getting lost on day one and rushed back up the general classification to fifth place. The next few stages will determine if she can overcome Thorne, Alex Robinette (Bicycle Sport Shop 3), and Pam Frentzel-Beyme.

Men’s Race
Never before seen at the BC Bike Race was the second sprint in two days by the same three riders. Barry Wicks (Kona), Neil Kindree (Specialized/ EMD Perono) and Rocky Mountain rider Chris Sheppard traded the lead multiple times during the day, but it was Wicks who again proved to have the legs for the win. Wicks and Kindree are effectively tied for first, in an unprecedented situation for the BC Bike Race. 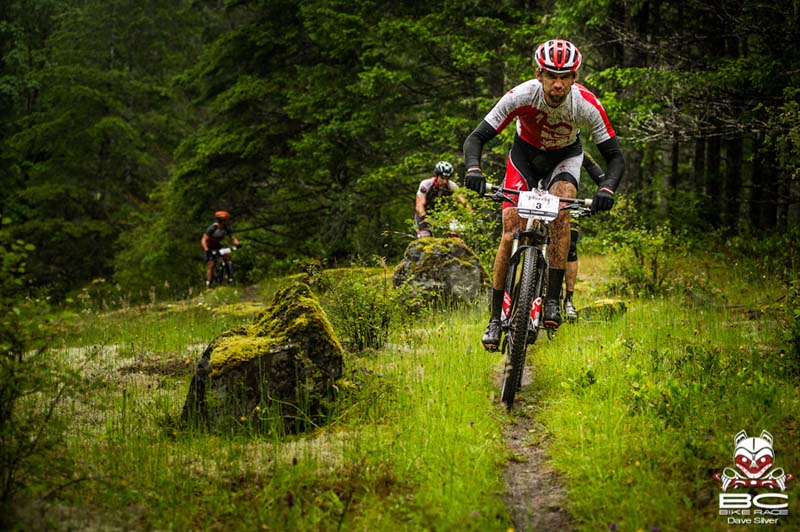 Only Sheppard had any mechanical issues during the day when he flatted early. Quick thinking and some desert experience had his flat fixed and he was able to chase back to the duo of Kindree and Wicks after about 20 minutes of steady riding. When asked about the chase Sheppard attributed much of his success to his switch to a 29er. “That’s day four in the wet and day eight on the 29er. Chasing was awesome, I got in the zone and was feeling comfortable and confident.” That effort kept Sheppard within three seconds of first place overall.

Seven of the top ten men were experienced BC riders or locals who were well adapted to the conditions. Cory Wallace (Kona) showed he had the chops to slice through wet rocks and came in fourth, while 5th went to another Canadian Matt Hadley (Xprezo-Borsao Factory).

Wendy Simms (Kona) won both stages on the Easton Gravity Enduro with her singletrack prowess. Hanna Thorne wrangled a 2nd from the field while Sonya Looney (Topeak/ Ergon) earned a 3rd on her 26" hardtail.