Riders treated to Sunshine Coast gold: Half-way mark is behind the riders.

Stage four of the BC Bike Race began by boat or floatplane over the spectacular Jervis Inlet and finished with grass under the riders’ feet in a field only blocks from the ocean. It was a refreshing finish after completing the days longest stage. Riders were able to grab a meal at the catered food truck and flop onto the green carpet exchanging stories of the day. Crossing the threshold of the halfway point in a seven-day stage race changes the atmosphere and a mixture of joy and calm is washing over the riders. 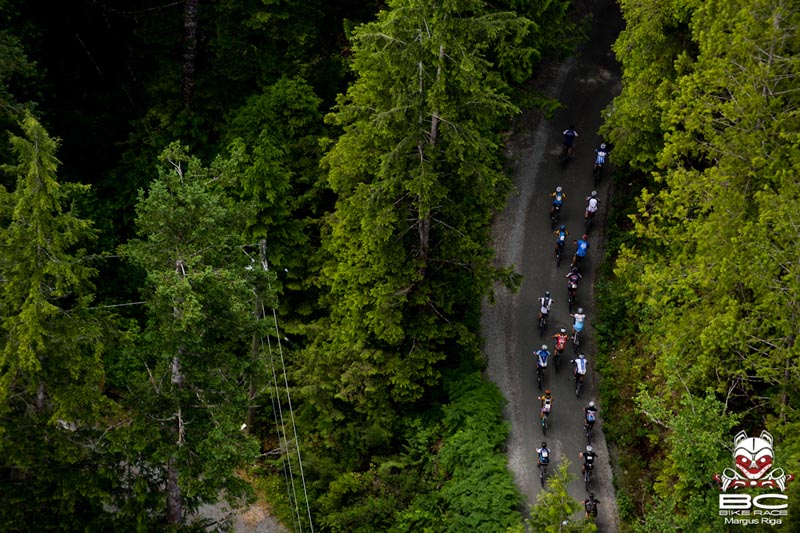 An early gravel road climb up to the Sunshine Coast Trail

Variety and climbing distinguished the course as riders left from the BC Ferries Earl’s Cove terminal and immediately climbed towards the Sunshine Coast Trail. It was a great day of ducking in and out of trail that varied from roller coaster dual-track, to ripping high-speed berms in forest-cuts, to singletrack lined with ancient old growth forests. The previous days of rain made perfect corners where it was usually dry and loose. Ribbons of dirt pierced that special green canopy that riders have become intimate with, in the BC rain forests.


The Racing
By day four, riders from 1st to 500th are settling into their own grooves and discovering themselves riding with similar people every day. The media is talking about who’s leading the pack but the riders are finding themselves engaging with the riders closest to them. New friendships and fun rivalries have begun to develop as hours are spent sharing hand built trails deep in the BC forests. Those are the other races within the race and one of the unheralded parts of stage racing.


Men’s Solo Epic
As predicted, day four was a game changer. After three stages the top three men were separated by only 2 seconds, so it was inevitable that on the queen stage someone would be looking to send a message COD. Team Kona rider Barry Wicks wasted no time at the post office and sent it in the first kilometre.

Soon after the start, Rocky Mountain Factory Team rider, Chris Sheppard was caught off-guard. “I looked down at my wheel and when I looked up they (Wicks and teammate Cory Wallace) were 10 seconds up the road.”

After pulling for his teammate, yesterday’s stage winner Wallace flatted early and Wicks continued on with a blistering pace. By the time Sheppard and Specialized rider Neil Kindree caught Wicks, both had burned any reserves they might have had to counter later attacks. Wicks and Kindree dropped Sheppard on the final climb. Kindree was next to lose contact; this time on the descent to home base when he bobbled once then blew a turn. Wicks took the opportunity to slice through the ribbons of brown all the way home. Kindree finished a minute and a half back while Sheppard took a four-minute stake to the heart.

The chase pack of Carter Hovey, Benoit Simard, Matt Hadley, and Wallace crossed the line within two minutes of each other to keep their race for the last podium spots tight. 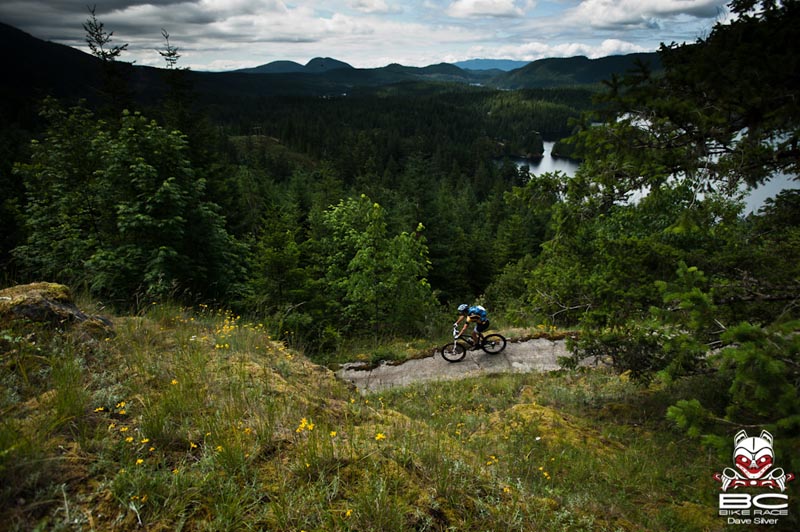 Men’s Team of Two
From top to bottom the results sheet shows small rivalries between teams fighting for places on the general classification. Jason Sager and Thomas Turner of the Jamis team have continued to finish at the front of the race, but it is the game being played between the two Rocky Mountain Factory Teams that has the local twitter-sphere cramping their thumbs. For the second day in a row Kevin Calhoun and Keith Stark of Factory Team 2 took time out of Colin Kerr and Greg Day of Team 1, who have suffered from unfortunate circumstances.

The other developing dual has Team Rocky Retro 95, Wade Simmons and Mike Hunter chasing down the Lamond Bros. The question is if Simmons and Hunter will close the gap or ‘huck to flat’ in their quest.

Men’s Masters Solo
Mannie Heimen from Namibia took another stage win today, but second place Chad Forrest was a slim minute-and-half back. The race within the race might be between Chris Birch of Canada and Al Killick of New Zealand. After four days they are less than a minute apart and wrestling for one more spot.

Women’s Solo Epic
Wendy Simms (Kona) looks to be cruising to the finish line with her feet kicked up as she slid across the finish line today, a little dirty but with a relaxed smile. “I rode with a really good group of guys that I was with for a good chunk of the race and it was really fun. It was part Van (Vancouver) a couple island boys, yeah it just kind of flowed and was really fun.”

A race with-in-the race in the women’s category is definitely developing between Melinda Jackson of Australia and Sonya Looney (Topeak/Ergon). “Today it was intensely steep. Sonya helped me so much. We were just talking so much. I think all the dudes are really confused because we just talk to each other all the time. We’re riding hard but girls just like, you know exchange words quite often.” The two are already joking about doing Cape Epic together. Looney moved to third overall while Jackson still has a solid hold on her 2nd place.

Women’s Team of Two
The race could be slipping from the grip of the Moab Maidens as the ladies of Mo Crazy take another win, tying the Maidens with two stages each. Still the Mo Crazy team would need to close a 24minute gap over three days of racing. Crunch time is here and who-ever can keep their team running with the fewest physical or mental breakdowns will be the victor is whistler.

Easton Gravity Enduro Day 4
It seems as if Andreas Hestler of the Rocky Mountain Factory Team is going to chip away at the overall Easton Gravity Enduro till he has sculpted his own trophy. With two wins today and his previous stage wins Hestler is looking to be the king of his own domain. Josh Carlson is likely to have the greatest chance of challenging the man from North Van, but time is ticking and he’ll have to step on it if he wants a chance.

Tomorrow Day 5: Sechelt to Langdale
Riders will have a shorter stage to gather their wits but this could possibly rank highest on their list of favorite days. The weather is looking to cooperate and the trails are some of the most spectacular of the week. With new bridges built by local riders and the community of Sechelt the connection between the flow of trails like Hwy 103, White Knuckle Tight and Lower Flume makes the day one to write in the diary (blog) about. It’s a guaranteed dunk when a stage ends with seven kilometres of downhill trails from Hwy 102, Sidewinder and The Plunge to the ferry finish line.