Kindree gets first stage win and takes overall by 5 seconds.

With hump-day out of the way, riders got to touch their tires to classic Sunshine Coast singletrack on the 40km course from Sechelt to the BC Ferry terminal of Langdale. With over 1400 meters of climbing, earning those turns was no easy task but the rewards included the one-of-a-kind 7km singletrack descent down 'HWY 102' and 'Sidewinder'. Through the newest piece of singletrack that took two years to build, riders couldn't help but give a yell to the forest as their bodies and bikes danced and weaved through the woods. Trains of riders spanked and got spanked by the brown belt of trail that never seemed to buckle under their weight. 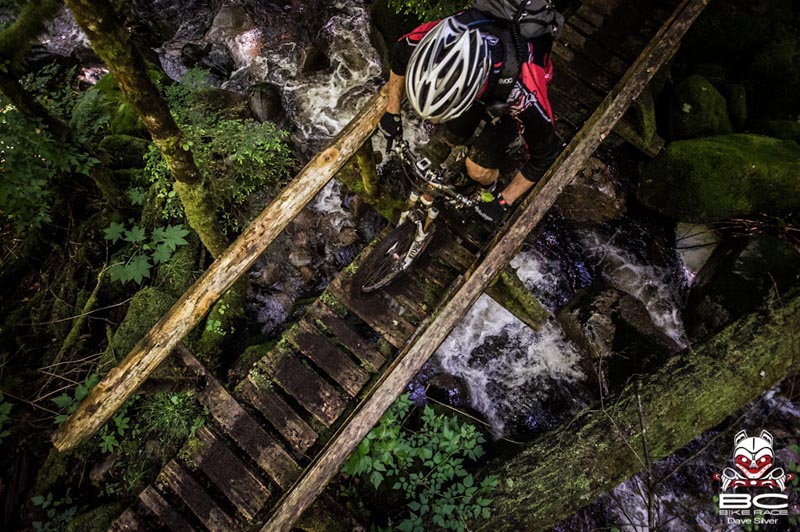 The atmosphere has become an international stew, with languages from 33 countries floating in the broth. This traveling adventure has been a good opportunity to tune up second languages and learn about riding around the world. The BC Bike Race has definitely hit it's stride as the wear of racing five days has dulled riders' guards and new friendships are solidifying in the sharing of stories and personal space.

The Race
In today's stage along the resplendent Sunshine Coast, Neil Kindree (Specialized/EMD Serono) came to the table and put a winning bid for the overall on the table. At the close of yesterday's stage the prevailing attitude was that Barry Wicks (Kona Bikes) had signed the deed to the house, but in the closest men's race in BCBR history this sale is still open for bids. Wicks didn't exactly fall apart, but Kindree didn't waste any time in reclaiming the time he had lent Barry the day before and charged him an extra five-seconds for the loan. Chris Sheppard of the Rocky Mountain Factory team also slapped Wicks with a penalty by dropping him on the RedBull Gravity Enduro stage, which he won in dominating fashion, and regulated Wicks to third place, his lowest finish of the race.

Kindree flew through the first half of the race and by the time he reached 'Guys Gulch' trail and started the climb up 'Hwy 103' he had a slim 45 seconds on Sheppard. Riders were greeted by the most technical section of climbing and had to negotiate roots and four-inch wide skinnies to avoid the wettest sections of old forest. Tired bodies were hugging the side of the ridge and carefully balancing across classic North Shore style bridges that looked ready to be absorbed by the rain forest if left un-ridden for a week.

At the entrance to the Easton Gravity Enduro Redbull section, Kindree had a solid minute lead, but Wicks and Sheppard were in pursuit. Wicks led into the final descent but with a few too many miss-steps and Sheppard was able go solo as he floated away on the rollicking descent.

Matt Hadley of the Exprezo Borseo-Factory team rolled in seven minutes back for fourth. "Today was great, super fun. I really like singletrack and this was a good day for shredding. Those first three guys just have a little more snap."

In the overall Kindree now has the slimmest margin of five seconds over Wicks while Sheppard has cut his deficit to three and a half minutes. Hadley and Cory Wallace (Kona) are only separated by 3:45. With two days left it means there are still plenty of checks to be cashed.

Men's Epic Masters Solo
Namibia rider Mannie Heyman's (Ormin) is still setting an unstoppable pace for the Master's category. Chad Forrest (Peking Man) has come from China to make the most of his race and isn't going to settle in and is fighting off a field that would love to take the second position on the podium.

Women's Open Epic
Wendy Simms hasn't let her lead slow her down and she seems to be enjoying pushing her pace. Below Simms the podium has shuffled on the stage with Hanna Thorne of New Zealand shifting into her gear as the trail pointed her direction, down. Thorne was second in the Solo Women's category and took a substantial four and a half minutes from everyone but Simms.

When asked about why today was the New Zealander's stage, Thorne pumped the finishing descent as a major factor. "More sustained climbing at the start rather than lots of short bursts and then just the long-long descent at the end. That's (descents) what I like the most and I'm sort of the best at."

Thorne still hasn't taken an overall spot from Melinda Jackson (Team KiwiRoo) or Sonya Looney (Topeak Ergon) but she is within three and a half minutes coming into her favorite stage at Squamish. Apparently Thorne is an aerial expert and is anticipating ripping the trail Half Nelson into submission.

Pam Frentzel-Beyme of the United States is sitting comfortably in 5th place while below her is a tug-a-war between Rahel Ruegge (Swisschocolate) of Switzerland and Fanny Paquette (Rocky Mountain) of Canada. Ruegga has spent the last two days sharing trail with Megan Rose who is the female member of the winning Mixed duo-team. "The last two days I was riding with Rose but we speak to each other and it's fun. One time she is in front of me, one time I am in front of her at the finish."

Men's Duo Team of 2
Four men sprinted for the team of two finish and it was Kevin Calhoun and Keith Stark of the Rocky Mountain Factory Team 2 who got their first stage win against the dominating Team Jamis. Thomas Turner and Jason Sager couldn't hold off the Rocky team who has been stoking the fire all week and might just be ready to burn the house down with two stages to go.

The Clif Bar team of Garrett and Jake Heitman maintained a fourth place  in the general classification but Wade Simmons and Mike Hunter of the Rocky Retro95 team who were rocking the spandex, couldn't transform the performance enhancing outfit switch to extra spots on the overall.

Easton Gravity Enduro
The longest Gravity Enduro stage brought new enduro stage winners to the podium. Andreas Hestler of the Rocky Mountain Factory Team checked off another win on the Fox Gravity Enduro stage one. He looked to be on a roll, but his momentum stalled on the second Redbull Enduro stage. It definitely payed to be at the front of the pack as evidenced by the three men who filled first through third on the 20 minute stage. Sheppard let his desire to drop Wicks motivate him to a winning time of 19:21. 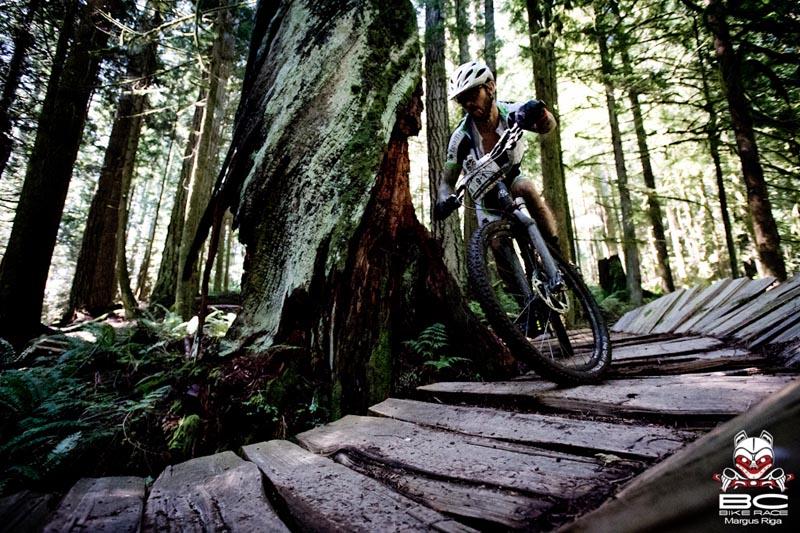 Day 6: Squamish
For 48km, the trails of Squamish, previously voted the best stage of the week, will host one of the most memorable mountain bike days for riders to take home and try to explain. As the famous climbing wall 'The Chief' looms over their heads they'll have a chance plunge through forests that have more treats than Christmas morning. Racers who prefer gravity fed trails will have their day of reckoning while the climbers try to make up for their glowing brakes on the descents. Tomorrows stage will introduce the world to the now infamous purpose-built trail 'Half Nelson' the legendary gnarl of the 'Plunge'.

Later in the day, the kids of Squamish will have a chance to show off their mountain-town pedigree at the Shimano Kids race in Brennan Park next to base camp. It is the final kids race of four that the BC Bike Race has hosted at different towns along the 2012 route.