We are now into the time of year for the bike companies to start introducing to the press the latest and (hopefully) greatest new stuff they have for the cycling enthusiast.  Some of this stuff has already been discussed online, based on sightings from the pro's bikes through the earlier part of the season.  There has been much speculation, but now we get the official word and all those details that previously weren't up for discussion.

Specialized is one of the biggest innovators in the market - one of their slogans is actually 'Innovate or Die'.  Usually, the S team brings together journalists from all over the world to some interesting location and sends us back to school for three days.  However, it is a school any rider would enjoy. 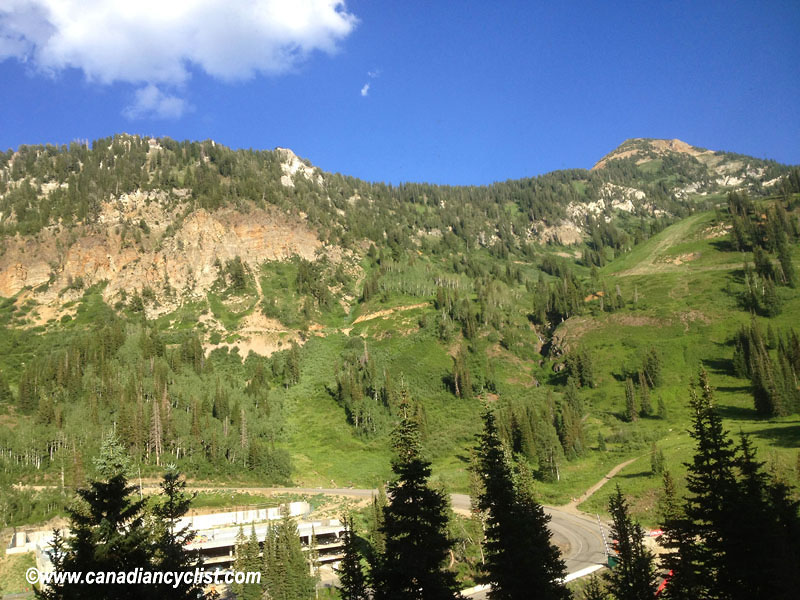 The view from my window

This year, we were at Snowbird, a ski resort outside of Salt Lake City, Utah.  While the 8000+ feet (2400+ metres) left us a little short of breath, the trails and roads were everything that could be desired for riding.  We started each day with the school part - seminars with the product designers covering new products and updates from the previous year, while the afternoon was open to riding either road or mountain; plus, for this year, cyclo-cross.

As always, Specialized has a huge number of updates, so we are going to break it into categories:  Road, Mountain, Women, Cyclo-cross and Body Geometry.  This is the review of the 2013 Specialized Road product line. 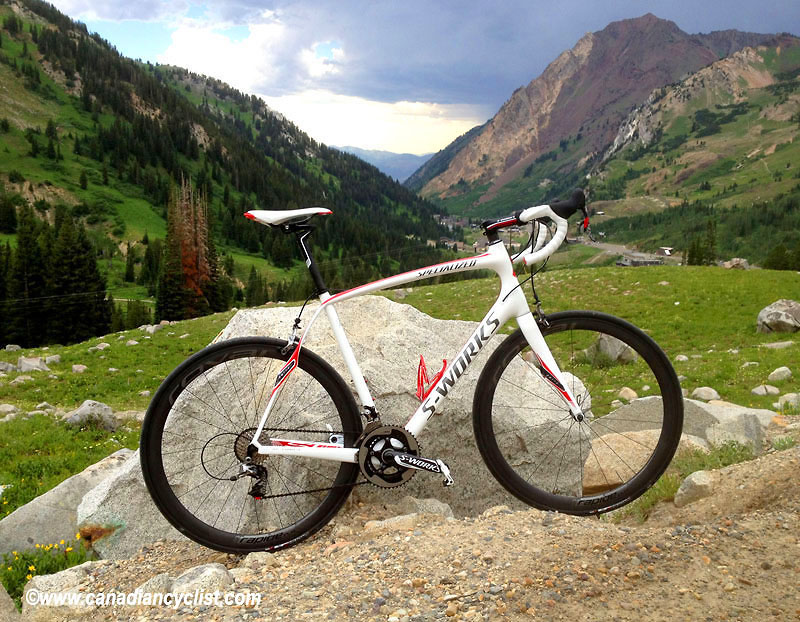 The Roubaix SL4 handled rough roads and 9000' better than the rider's lungs...

Last year, the big road news was the introduction of the new Venge model, and the latest iteration of the Tarmac; the SL4.  The Venge is an ultra rigid, hardcore sprint bike, while the Tarmac SL4 is the top-of-the-line road race bike.  The third road race platform that Specialized offers, the Roubaix, is the more comfort-oriented distance bike.  The Roubaix SL3 is the bike that did not receive any substantial changes in 2012, so guess what?  Welcome to the new Roubaix SL4!

For a bike that is only just being introduced to the market (it will actually start appearing in stores in the Fall), the Roubaix SL4 already has some impressive palmares, with Tom Boonen (Omega Pharma Quick Step) riding it to his incredible solo fourth win at the namesake Paris-Roubaix (of course, he also won Flanders on the Tarmac and Ghent-Wevelgem on the Venge...).

I have always considered the Roubaix one of my favourite bikes, with a good balance between comfort and performance, however, the Tarmac SL4 was a tremendous upgrade that tipped my feelings in favour of that model.  Specialized says that their upgrade to the SL4 version of the Roubaix has added stiffness to the Roubaix (an 8% torsional and 18.5% lateral increase), but maintained and even improved upon the smoothness of the ride.

I rode the new Roubaix SL4 more extensively than any other bike at the launch - both the S-Works version and the regular one.  There was a lot of climbing and descending, including one ride to over 9000 feet (2750 metres) on a gravel/dirt road with some great switchbacks for the descent.  The S-Works model was an incredible ride - smooth and stable at all speeds.  Specialized says that they have optimized the frame design, with size-specific carbon layup and tube sizes.  Even the head tube bearings are size specific, increasing from 1.125" in the 49 and 52 cm, to 1.375" for the 58 and 61 cm. 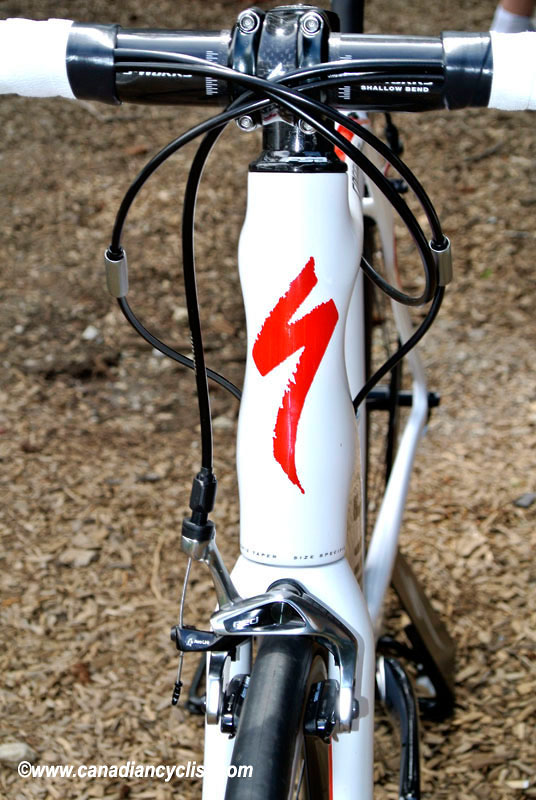 The new Roubaix SL4 has a redesigned headtube for improved stiffness

The non-S-Works one seemed less sure carving through corners, but I didn't really have enough time on it to really formulate a strong opinion on this aspect (and the geometry is the same as its more expensive brethren).  Another important point is that the S-Works model came with one very important component that the other did not:  the COBL GOBL-R seatpost.

This is a new design that Boonen first tested in the Paris-Roubaix, and is a carbon post with a leaf spring built in just under the saddle.  The idea, of course, is that it damps road vibration, providing some vertical compliance without impacting lateral or torsional stiffness.  Unfortunately, I didn't have the opportunity to separate out the effect of the post from the S-Works versus non-S-Works framesets; we are hoping to try that at a later date. 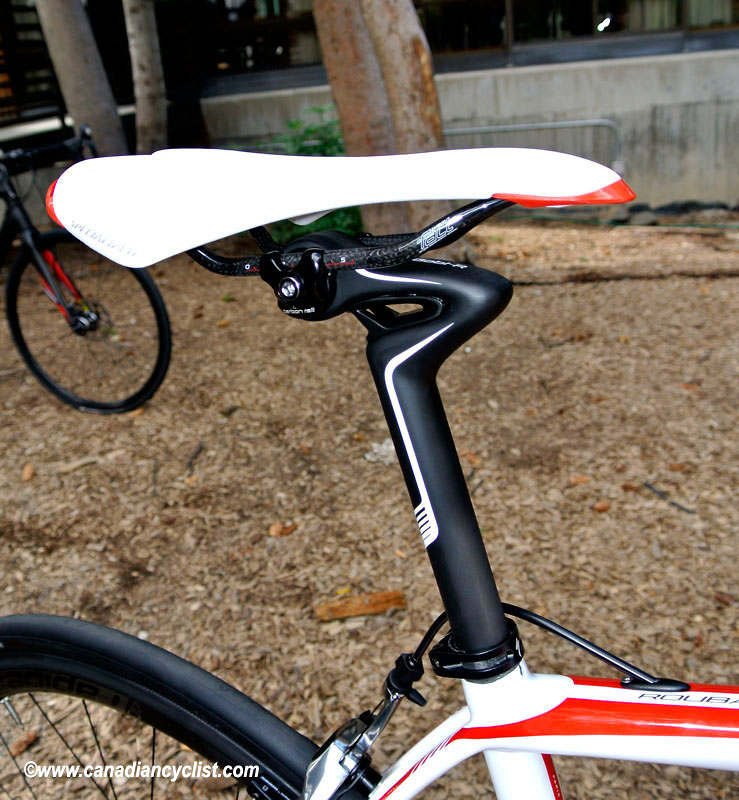 By the way, the COBL GOBL-R post will be available as an aftermarket unit in the Fall.  It will come only in a 27.2 mm diameter, and the price is not yet available.

The Roubaix will come in a variety of component builds, with both disc and non-disc versions.  Look for a full review to follow. 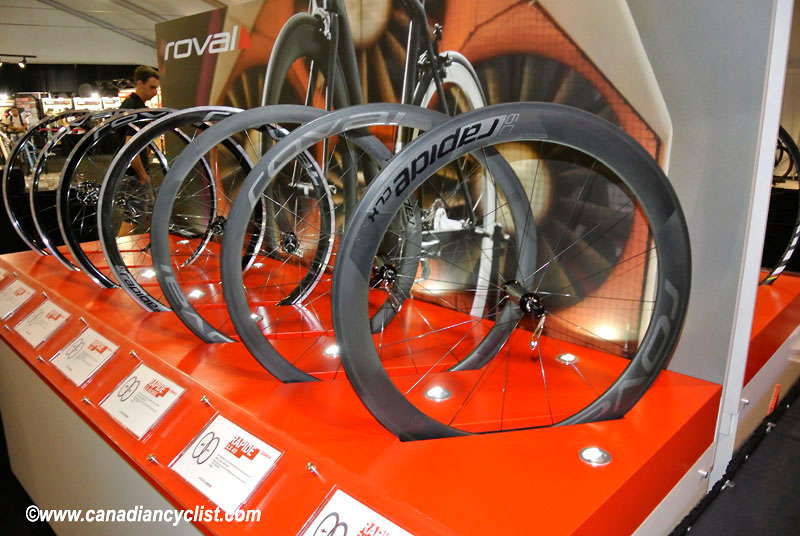 Besides the major upgrade to the Roubaix, Specialized is introducing a number of road component and accessory innovations.  The new S-Works McLaren TT helmet was previewed at the Tour, and is the first of what is expected to be a number of collaborations in aerodynamic products between the two companies.  Specialized has also added to the Roval wheel line for 2013, with the CLX 60 and CLX 40 clincher wheelsets.  The number refers to the rim depth in millimetres.  They will be available in both disc and caliper compatible models.  Specialized says that they have worked on carbon rim cooling issues (for the caliper model), with a specific pad formulation.  I did find that on an extended five kilometre section with multiple switchbacks (and in 40C-plus weather), there was little brake fade. 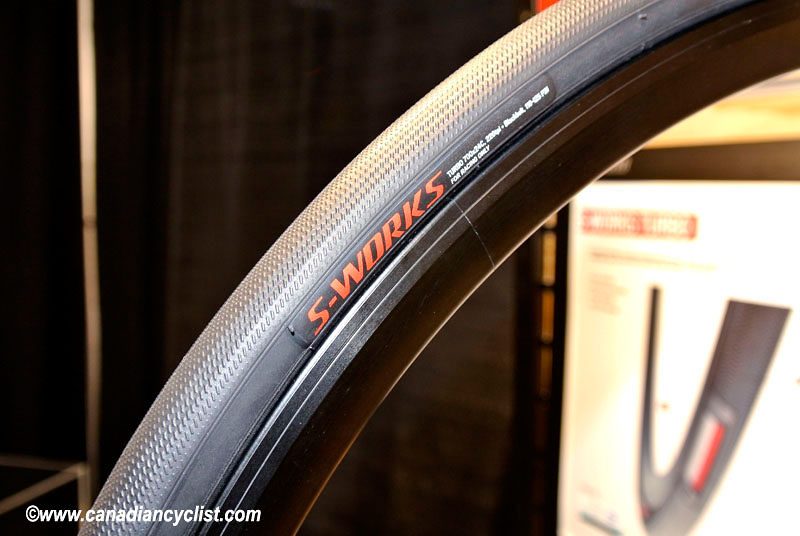 The S-Works Turbo is already being used in the Tour

Specialized is also introducing the S-Works Turbo clincher, which is currently being used by riders such as world time trial champion Tony Martin (Omega Pharma Quick Step) in place of traditional tubulars, since they are quicker, with less rolling resistance. 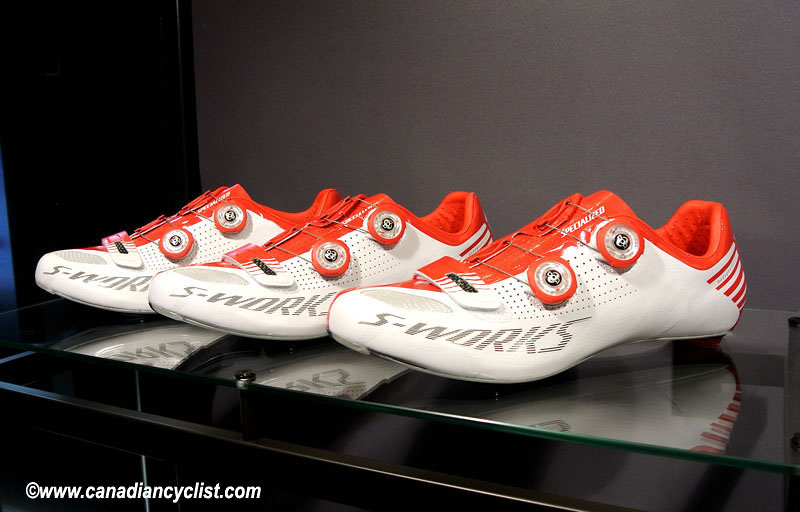 The company is also bringing out a new top-of-line shoe, the S-Works Road.  So far, Boonen has raced on the prototype in all his spring Classics win (and reportedly will not return them), and Andre Greipel has won three stages of the Tour.  The goal was to make them lighter and stiffer, but improve fit.  This is a tall order, since improved fit usually means a softer, more moulded fit for the upper, which impacts performance. 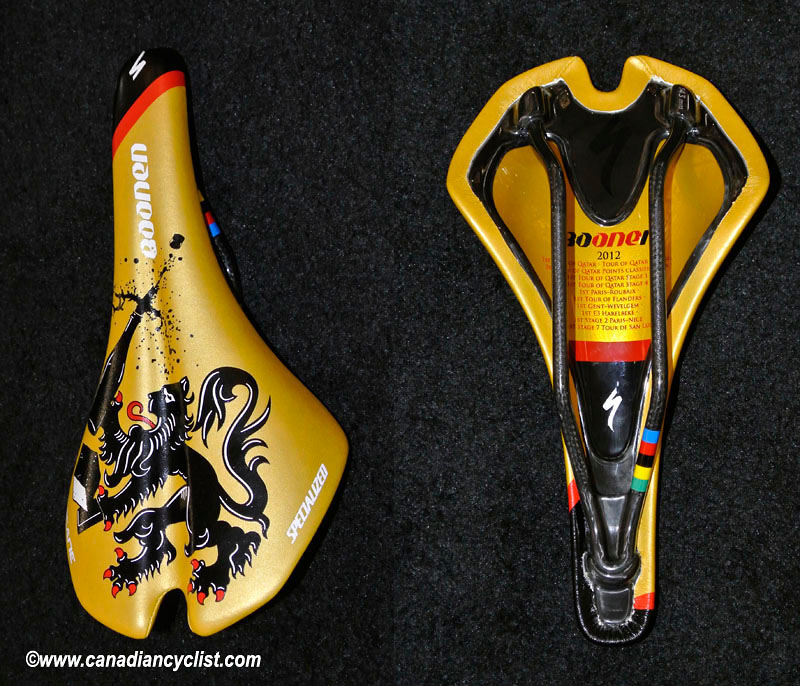 I wore a pair for all my road riding during the launch, and I will agree that they are certainly a big step up from last year's model - which were pretty good to begin with.  The top has been redesigned with a number of overlapping materials, to provide both comfort and a close, non-give fit.  There are new lasts for both men and women, and Specialized has introduced a new version of their BOA retention system, plus aysmmetrical left and right sides to the upper for fit.  The footbeds have also been redesigned.

- Allez is usually considered the entry level aluminum line, but Specialized have made some very nice upgrades for 2013.  The frame has been completely redesigned, with a new welding process that is both stronger and very nice looking.  For sub-$2000 there are some very nice bikes here.  If you happen to have some spare change around, then you might want to consider the 14.5 pound (6.6 kg) limited edition version; it is absolutely gorgeous.  Unfortunately, there are only 50 being produced (Canada will likely get a couple) and it sells for an estimated ... $7500. 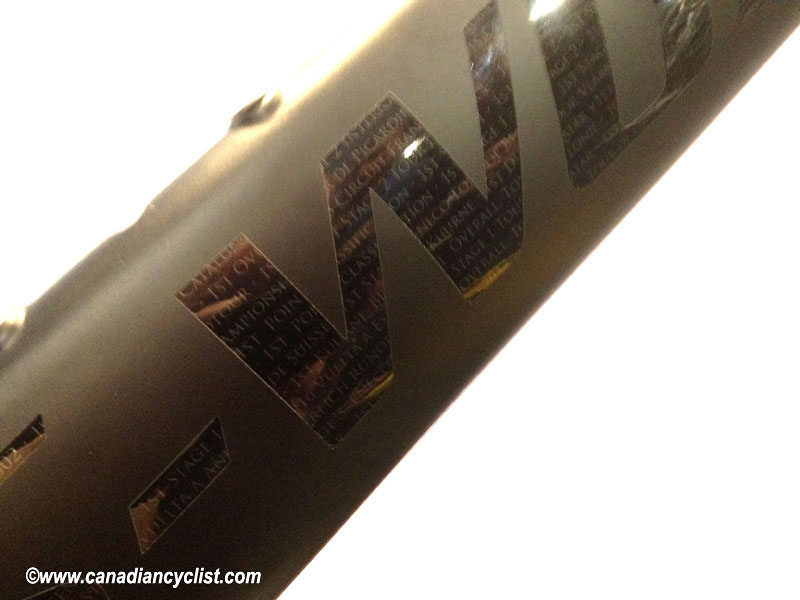 - In addition to the limited edition Allez, there will be a Boonen edition frameset.  There will be 200 worldwide (well, 199, since Specialized founder Mike Sinyard grabbed one), and the kit consists of a frame, fork, saddle and helmet.  The saddle has Boonen's wins thus far this season etched on the underside, while the frame has etched into it all of Boonen's professional victories.  Canada is slated for six, we are told and we don't have a price yet (but if you have to ask...).