Canada is sending what is probably its strongest Olympic cycling team to London since the 1996 Games in Atlanta, when Canadian cyclists won five medals.  Pretty much every member of the Canadian cycling community knows about riders such as Catharine Pendrel, Tara Whitten, Zach Bell and Ryder Hesjedal, and the broader community are getting to know them also, through the increased media attention as the Games draw closer.

But Team Canada is not just athletes; it is made up of the support staff that work before, during and after each competition to make sure that the athletes can focus fully on their races, confident that everything is in place for what is likely the biggest races of their careers.

Over the past few months, we have interviewed some of the people who will also be at the Games, out of the limelight, making sure that everything possible is done to help those athletes shine.

'Scotty' has been the head mountain bike mechanic (as well as working Road projects like Worlds) for the Canadian national squad for four years, looking after riders at World Cups and world championships.  This will be his first Olympics. 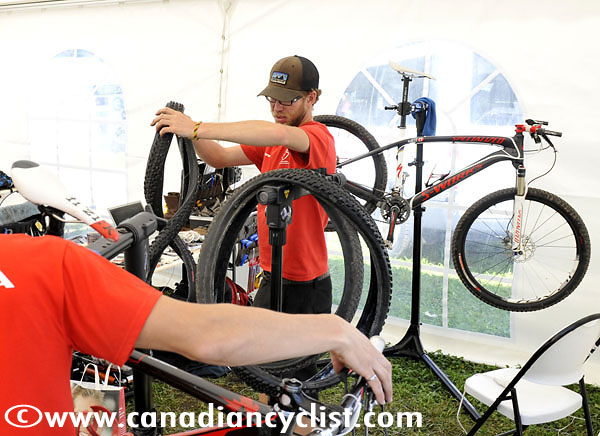 When he isn't flying around the world (and this year has included multiple trips to Europe, plus South Africa and Argentina), Scott works with Hugh Black at True North - one of Canada's top custom framebulders, based near Fergus, Ontario.

"Then I met Dan Proulx [national mountain bike coach] at one of the Pan Ams and started working on mountain bike events.  So, primarily mountain for the past three years.  But I do do a lot of Espoir and Development projects on the road as well."

He got started with the national team when he was working at a bike shop. "I was going to university at McMaster and working at Freewheel in Dundas [Ontario], and Chad G [Grochowina, another pro mechanic and CC product tester] was back there, after having been working in the States for a pro team.  He would tell me hilarious stories about working on the pro circuit, and that was the same time that the Hamilton Cycling Centre was going full swing, with lots of Cat.1 and Cat. 2 racers in the area, so there was lots of opportunities to work races.  It kind of just grew from there."

So what's a typical day at an event like Worlds?

"Well, there is usually a race out of bed for the showers and then, if you are with the Belgian mechanics who sometimes work with us in Europe, it's a source of pride to see who can be first at their toolbox, even if they are just polishing them (laughs)."

"There's usually two things going on at any given day; there's the racing going on and there's the training going on.  Different mechanics are assigned to different programs, and we usually spell each other off.  So, for a mechanic doing a race day, you are leaving [for the venue] about three hours before the race, and the athletes leave about an hour and a half before the race.  You want to be set up before the athletes arrive; tires pumped and everything ready to go."

"If you're on a training day, then it's a little later because the riders will go out riding around 10:00 am, then when they come back you have to wash the bikes and prep them for the next day, get the race wheels on and everything ready for the riders that are racing the next day."

"I have a system where we double check all the work, so someone else will check the work, make sure bolts are tight, run through the gears, make sure nothing got missed.  It's just an extra level of security.  Then, there's little odds and ends, like someone racing in two days time will need a new tire.  And then there's the prep for the next day loading.  It's a long day."

"And on the national team, unlike a pro team where everyone rides the same stuff, there's a lot of different kit to deal with.  It's just time consuming, shuffling stuff around, but you've got to stay on top of it."

When riders arrive and get ready for the start, Scott's role changes to being prepared for last minute adjustments and crises.

"I always tell the riders, when they take their bikes to go to sign in or the start, to run through the gears and make sure everything is okay.  Every rider has their own process.  Raph Gagne likes to check all the bolts himself for piece of mind; you would always see Jan Ullrich on the start line checking his quick releases ... Riders just have those mental check lists that they go through.  So then you can respond to any last minute fixes."

"Then the riders head to the line, and you want to head up there with a set of wheels and a pump, some allen keys and a screwdriver.  Then, if they have any last minute requests, like they want the brake a little looser, you're good to go.  You just want to be prepped, to make it as calm as possible for the athlete."

Then it's time for the race, and the role changes again.

"If it's a road race, you head to the car, it's got the spare bikes on the roof, wheels and tool box inside.  For the first 10K you want to be ready, especially with neutral rollouts, because they are never neutral and there's crashes and stuff that happens.  After the first half lap it will usually sort itself out and everyone will get into a rhythm.  Depending upon where you are in the caravan it will be either interesting or less so ... and through the feedzones you want to be attentive."

"Race radio will call you up if there is a problem, so you have time to get prepared ... but they'll call a front or rear flat, and they're accurate about 20% of the time, so I always get out with both wheels.  Number one rule is wait for the car to come to a complete stop or you'll probably roll your foot over..."

"Always have wheels with you, always have tools in your pocket, like a 4-5-6 allen key and a screw driver.  I tell the riders if it's not something that can be fixed quickly, like a flat, then throw the bike to the side and that speeds up a bike change.  If it's just a little adjustment, a lot of it you can fix out of the car, depending upon the rider's level of experience and skill ... rear derailleur adjustments, brake adjustments, little things like that.  I don't know if I'd do that with a Junior ... they'd probably be the ones most wanting to do it, but ..."

"If it's a crash, you just jump out and run forward, hoping for the best.  Everything usually grinds to a halt, so you've got time to get the bike off the roof if you need to."

For mountain bike it's obviously different, "it depends on how the tech zones are set up.  If they are both together and close to the start, then one mechanic can head to the tech area while the other stays at the start, or if they are separated, then one heads to the furthest one before the start and the other does the start and goes to the closer one."

"During the race we have people on the course relaying info, so that we can be prepared if a rider comes in with a flat tire or a broken chain, for example.  It really depends a lot on where it happens on the course, and how long they have to run or ride slowly to get to us.  We have extra sets of wheels, chains and other stuff, but they aren't allowed to change bikes so there is a limit to what we can manage.  You have to be prepared to improvise."

A few weeks ago, at the Windham World Cup, one of the provincial team riders came into the tech zone with a fork that had stuck in the locked out position.  The team was trying to fix it, but you came running over and just cut the cable, removing the problem; is that what you mean?

"Exactly.  The idea is to get them going as fast as possible."

What's the most interesting - if that's the word - problem you've had to deal with in a race situation? 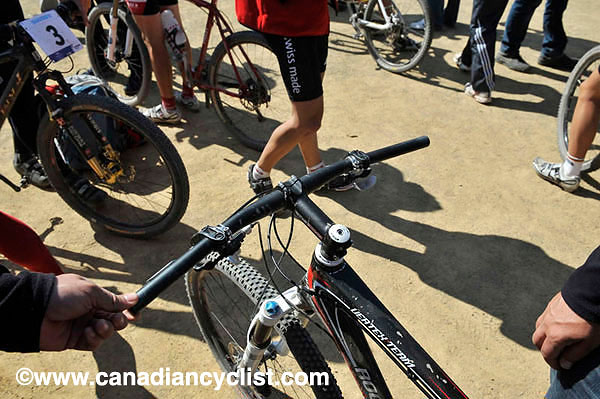 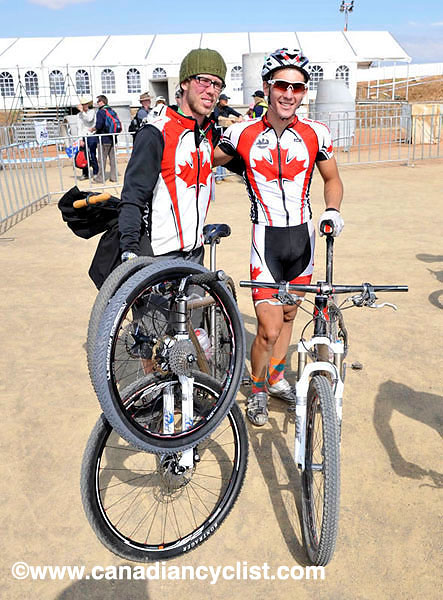 "Remember a few years ago in Australia at Worlds [Canberra, 2009], when we saw Evan Guthrie crash?  We could see when he was running up that one half of the bar was broken.  When he rolled up his bar was broken at the stem.  We pulled the grips off, removed the brake and shifter levers, put the new bar on and reinstalled the levers, and sent him back out and he actually did quite well for the rest of the race, given that he had no grips ... that was pretty interesting."

So why does Scott keep doing it?

"With a pro team it's little bit like Groundhog Day [the Bill Murray movie]; you do the same races year in, year out ... you wake up every day, you wash the bikes, you go to the next start.  With the national team, it's much more interesting.  You're always meeting new people - new Juniors, new Espoirs - you get to see new bikes, go to new places.  It's a fun job.  The mechanic stuff is the important stuff, but there's so much beyond that.  Running a big project is all about managing relationships ... the more interesting part of being a mechanic is communicating, like how to deal with athletes when they're worried and stressed out."

"There's lots of really good mechanics who can work well within the confines of their shop, with all their tools around them and all their replacement parts, but to be able to do it on the road, to be able to problem solve, to fix things, to deal with different personalities, with athletes, with staff ... that's challenging."

"It's fun coming up with solutions and processes, and ways to make it better, and you can always make it better.  It's been great to see the whole mountain bike program grow from, say, three years ago, when Dan [Proulx] and I started it with five riders.  It's well-oiled and it's cool to see how that's grown, and still know that you can improve upon that."

At the 2012 Windham World Cup, working the tech zone 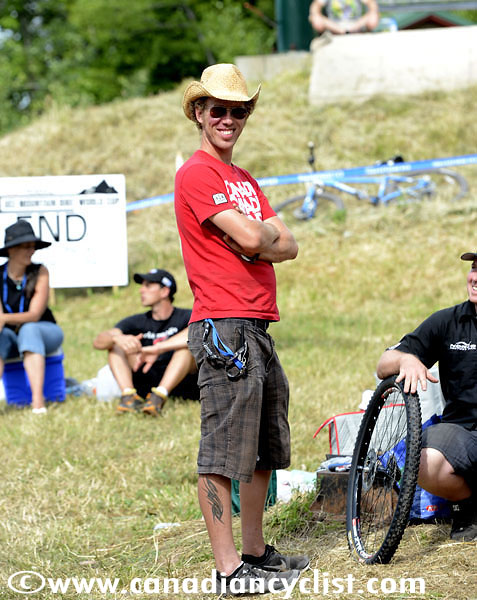