Team GB tried valiantly, but could not overcome an entire peloton that was determined to avoid a sprint finish with Mark Cavendish, in the opening Men's Road Race at the London Olympics.  A large group slipped away on the final circuit of Box Hill, and then Alexandr Vinokourov (Kazakhstan) and Rigoberto Uran (Colombia) jumped away from that group, with Vinokourov taking the gold medal.  Kristof Alexander (Norway) took bronze ahead of Taylor Phinney (USA) in the sprint from the rest of the break.  Canada's lone entry, Ryder Hesjedal, finished with the main bunch, in 62nd at 40 seconds. 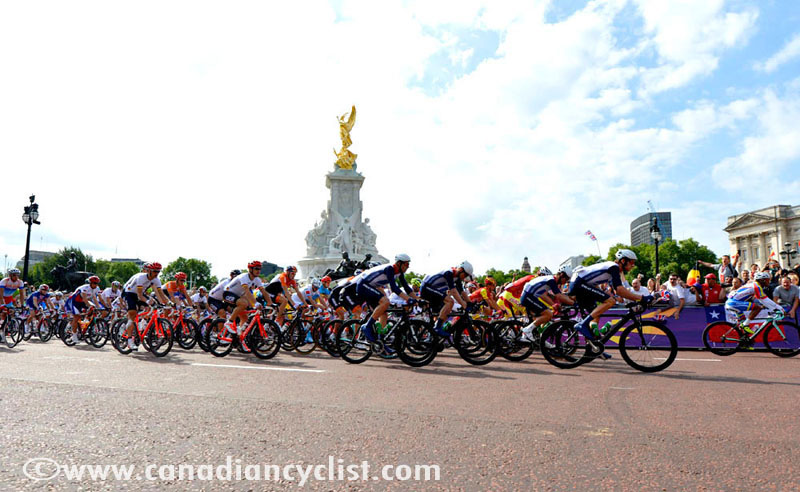 The British team went to the front right from the start

A group of 12 riders broke away early in the run from Buckingham Palace to the Box Hill circuit, which the riders would do nine times before heading back into the city.  The crowds were massive, lining the streets two to three deep for at least the first 20 kilometres out to the circuit, and then gathered on the hillsides at the circuit.  There was easily over a million people, with Phinney calling it "a wall of sound". 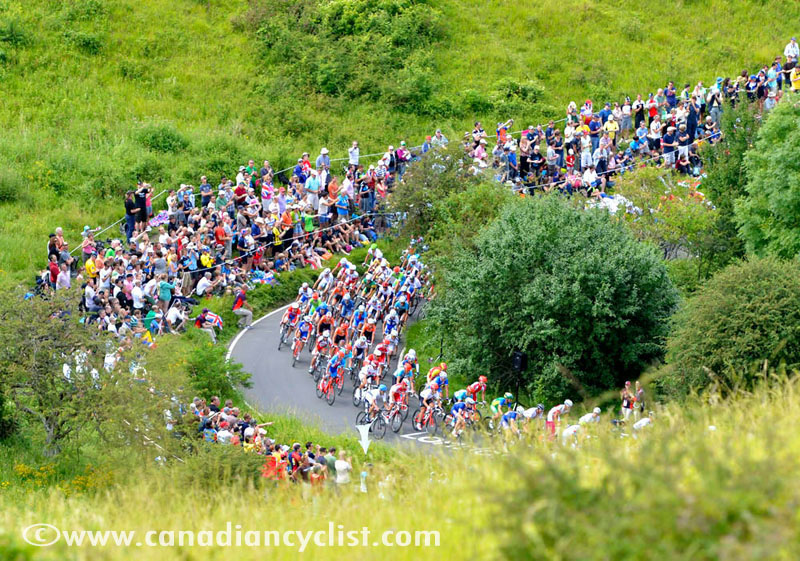 The crowds were impressive on Box Hill 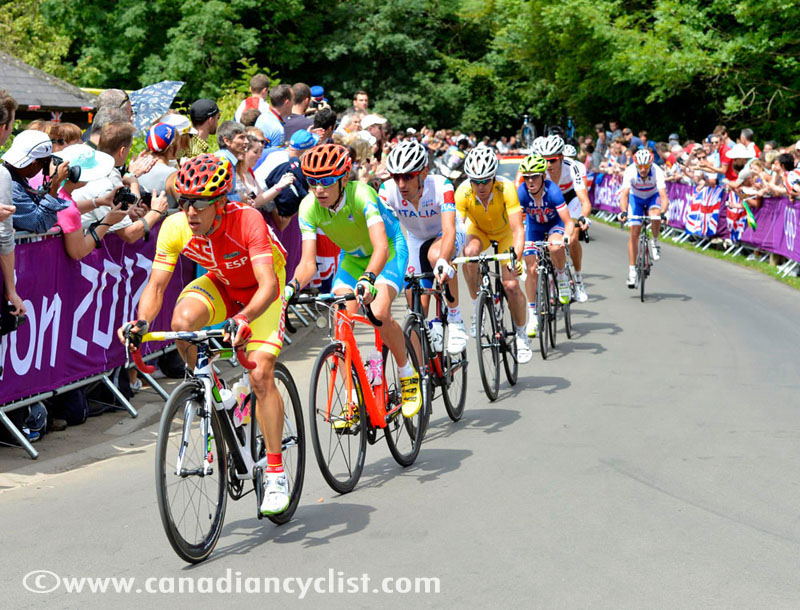 The early break on the climb 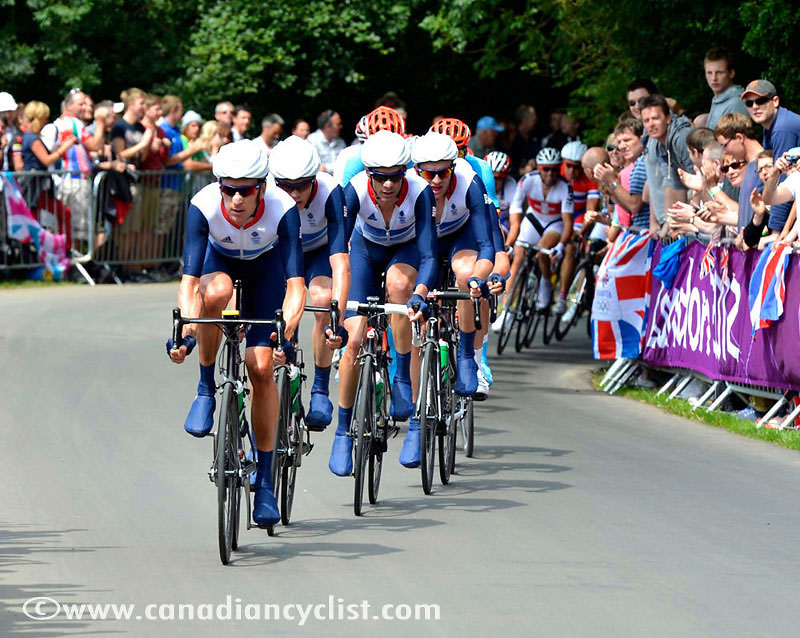 Wiggins leads the British chase over the top of the climb

Team GB was riding steady tempo, but couldn't bring the gap down and none of the other teams were helping much.  Germany offered a little help, but then riders such as Vincenzo Nibali (Italy) and Philippe Gilbert (Belgium) started launching attacks on the climb each lap.  This brought the gap to the leaders down, but the effort of reeling in the danger riders was taking its toll on the Brits.  They were pulling the lead back, but there were small groups in between, particularly Fabian Cancellara (Switzerland), Luis Leon Sanchez (Spain) and Alejandro Valverde (Spain).

Cancellara, with two team mates, was driving at the front, scooping up the remnants of the lead and opening a gap approachig a minute.  Britain started to crack, with Chris Froome falling back and Tour winner Wiggins forced to take over pacemaking.  They got a brief respite when Cancellara inexplicably took himself out in a corner, crashing into a barricade (and reports say possibly suffering a broken collarbone  update: shoulder contusion and hemorrhage in muscles), but then GB team captain David Millar faltered and eventually so did Wiggins, leaving just Ian Stannard to support Cavendish.

While the rest of the front group started to look at each other when Cancellara crashed, Vinokourov and Uran didn't hesitate, jumping away with ten kilometres to go.  In the final straight, down the red pavement of The Mall in front of the Palace, Vinokourov was easily the stronger, coasting across the line with his arms in the air. 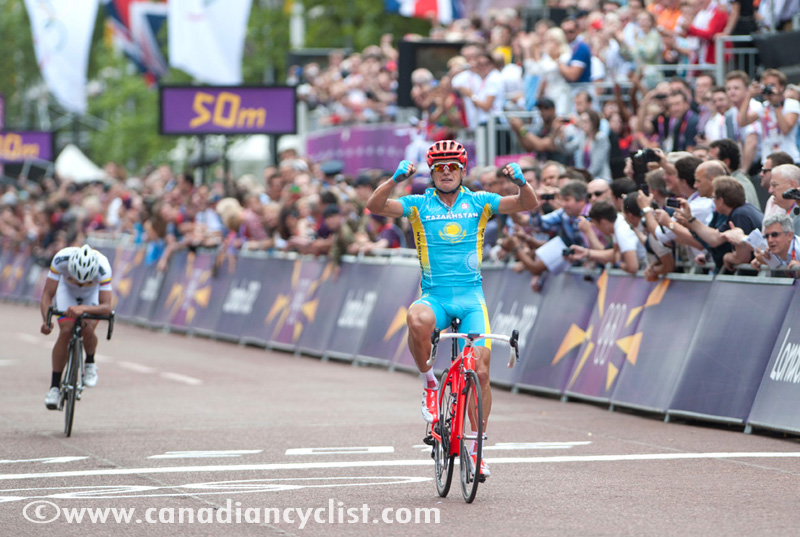 Hesjedal commented afterwards, "It was okay, but I just missed out at the end there.  It was hard to read what was going on.  GB was riding so strong, and it seemed like they were in control the whole time.  I'd see guys attack, and not really go anywhere, and GB was maintaining the gap pretty steadily.  The pace was stiff enough that it didn't really make sense to attempt a whole lot.  I honestly thought that they would bring it back, and the attacks would start then, when the group was together.  But it went all of a sudden, when a real good group got away, and the Brits couldn't bring them back."