Day Five on the Track saw Great Britain take their fifth gold medal in seven events with Jason Kenny overpowering Gregory Bauge (France) in the Men's Sprint.  The Women's Sprint worked its way through the Quarterfinals, with the top-ranked riders all making it through to tomorrow's semifinals.  The Women's Omnium also went through its first three events, with Laura Trott (Great Britain) and Sarah Hammer tied for the lead, and Canada's Tara Whitten in fourth.

Trott quickly took control of the Omnium with a blazing fast Flying Lap.  Whitten finished seventh and other favourites Hammer and Annette Edmondson (Australia) fifth and third, respectively.  In the Points Race, Whitten and Hammer were the only front runners to make a group that gained a lap, with Whitten finishing third, behind race winner Malgorzata Wojtyra (Poland).  After the second event, Hammer and Whitten were tied for the lead with ten points each, one ahead of Trott, who was tenth. 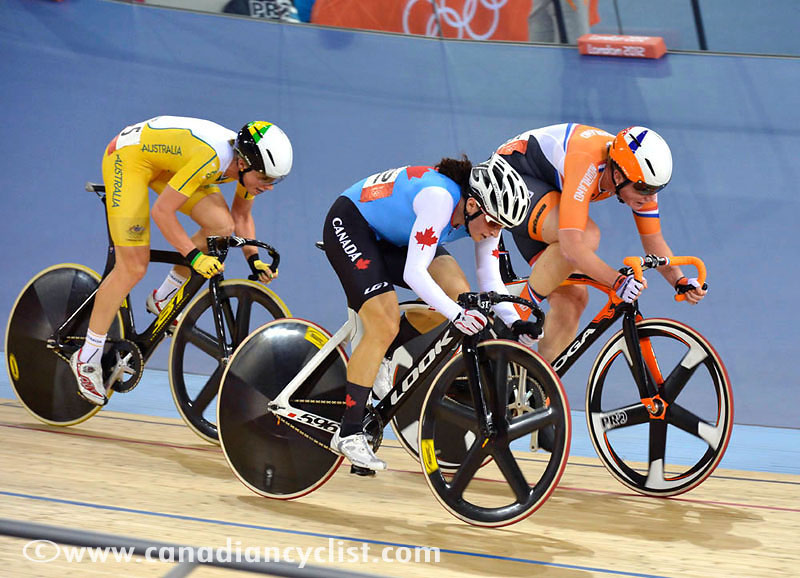 Whitten goes for a points sprint
The third event was the Elimination, and here Trott and Hammer went firmly into the lead in the overall standings, with the British rider winning her second event and Hammer finishing second, followed by Edmondson in third.  Whitten was a disappointing eighth, leaving her six points behind Trott and Hammer, and one behind Edmondson.

Whitten will have a difficult job to make up ground on the two leaders, with both Trott and Hammer expected to do well in the Individual Pursuit, and Trott favoured to win the 500M time trial.

"There were a few ups and downs," agreed Whitten.  "The Points race is probably one of the best Points races I have ridden in the last couple of years, so I was really happy with that."

"But the Elimination was a bit disappointing; usually it's an event I can really count on and I just got caught .... I'm still a bit stunned about what happened."

"I have to just re-focus for tomorrow. I have a really good Pursuit and I think I can move back up the rankings. We'll see what happens tomorrow."

"I knew I needed a good Points race. my flying lap was a kind of average for me. I was hoping for a little bit better.  But I knew after the outcome I just had to make sure I was really aware in the Points race and taking advantage of any opportunities that I saw."

"I definitely prefer the Pursuit, it's easy to quantify.  You know what you can do. So I'm looking forward to that, then we'll see with the Scratch and the 500 Time Trial what my strategy is."

"I would preferred to be a little bit higher in the standings but I can live with fourth, for now."

This event was always expected to come down to a competition between Kenny and Bauge, and that was how it played out.  Both riders easily disposed of their competition in the semifinals - Njisane Phillip (Trinidad) for Kenny and Shane Perkins (Australia) for Bauge.  However, when it came to the gold medal round, Kenny was clearly the faster rider, winning in two straight, both from the front and behind, justifying his controversial selection for Great Britain over defending champion Chris Hoy.  Perkins defeated Phillip in two straight for the bronze. 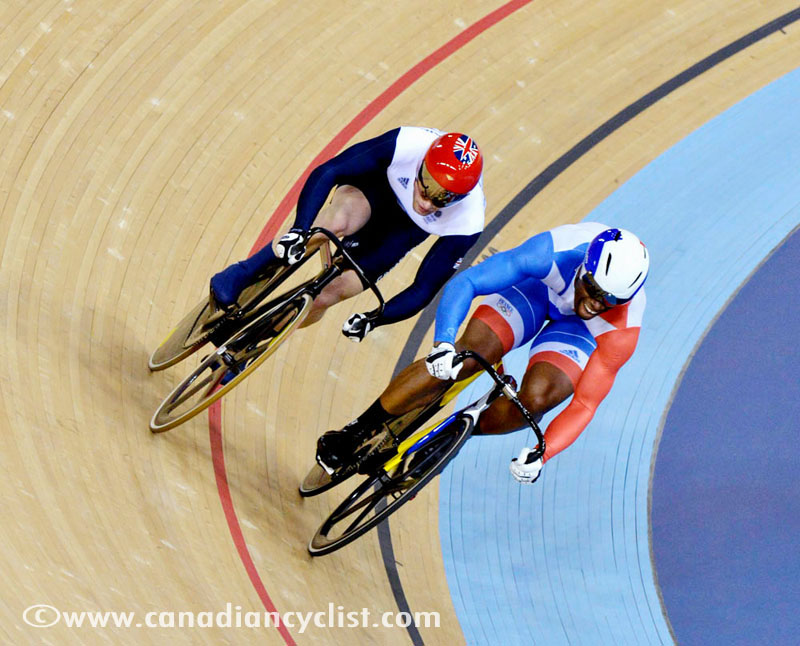 Jason Kenny (Great Britain) vs Gregory Bauge (France) in Gold medal final
"It's amazing," commented Kenny.  "I hadn't thought about it until the last lap, then it suddenly dawned on me. It was quite the battle to get here with Chris [Hoy]. I didn't want to mess that one up. I was really pleased. I just did it for the team. It's pretty amazing."

"I am really pleased about that [beating Bauge]. We're really close. At the worlds and the year before, he's been the slightly faster rider. Three days ago, I qualified a little bit quicker, and again the race has come down to that. I like racing against Bauge, he's a real pro rider and it always makes for some pretty exciting racing. I am really pleased."

Bauge, who has been the dominant rider for much of the past four years, was clearly disappointed.  "I've got nothing to say. I've done my sprint, I think I haven't made any mistake along the two matches. This is sport, small details worked in his favour. I have no regrets."

"I don't like losing. This is a defeat in a big event, it angers me. This is a failure for me personally. It is four years that I've dominated in my discipline. I wanted gold, it's a disappointment. I do not train twice a day for this disappointment. We have to look at the big picture. I've reached five finals in big events in four years, I'm the world champion, I'm still the No.1, he beat me, unfortunately," 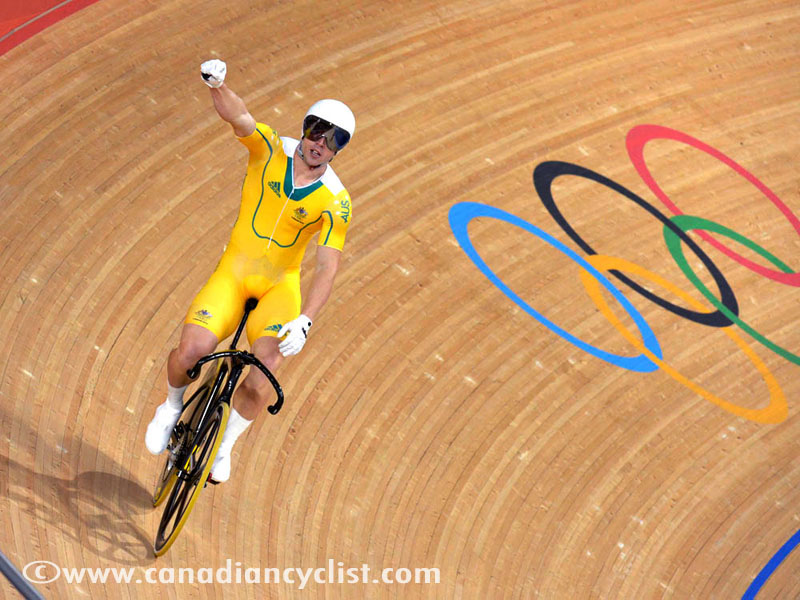 Perkins defeated Phillip in two straight for the bronze 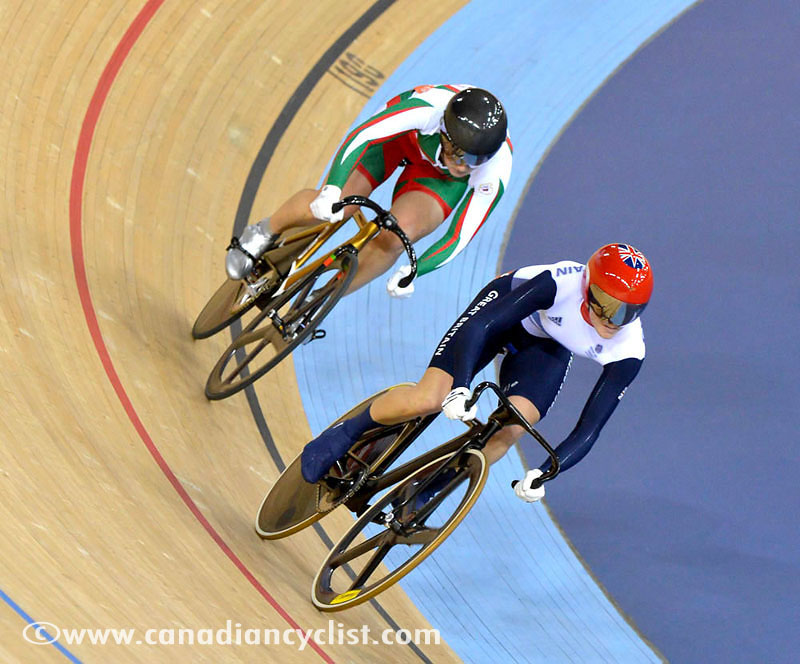