Italy opened the cross-country events at the UCI Mountain Bike and Trials World Championships with the first gold medal in the Team Relay event on Thursday in a sprint finish over France. Germany won the bronze medal. Each team contained an Olympic medal winner. Canada rode in second place for the first two laps, but faded to fifth by the finish, 2:03 off the winning pace. (An interview with Canadian Junior Marc-Antoine Nadon is posted at the bottom of this article) 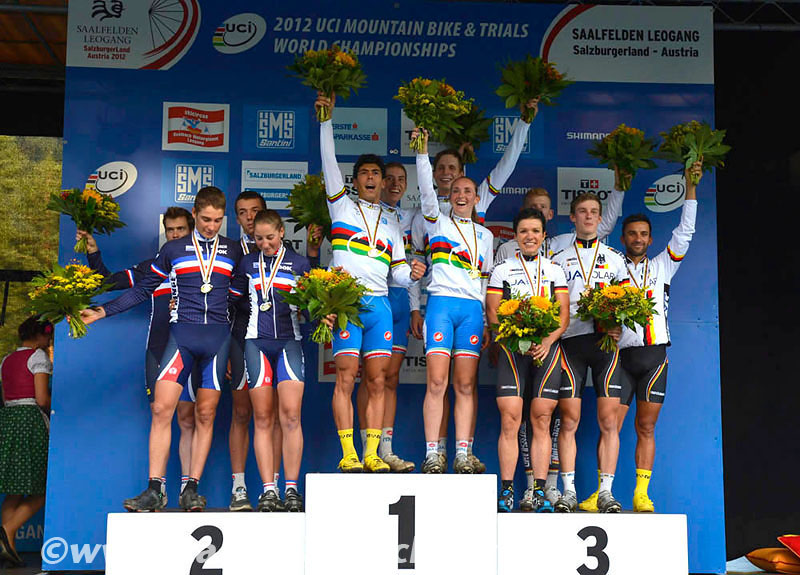 The Team Relay consists of four riders from each nation doing one lap of the cross-country circuit. Each team contains an Elite Man, Elite Woman, Under 23 Man and Junior Man. Teams have the individual choice of which order they send the riders off, and strategy plays a role: do you send your fastest riders off first and hope the slower ones can hold on, or do you send slower first and hope the faster ones can catch the leaders? 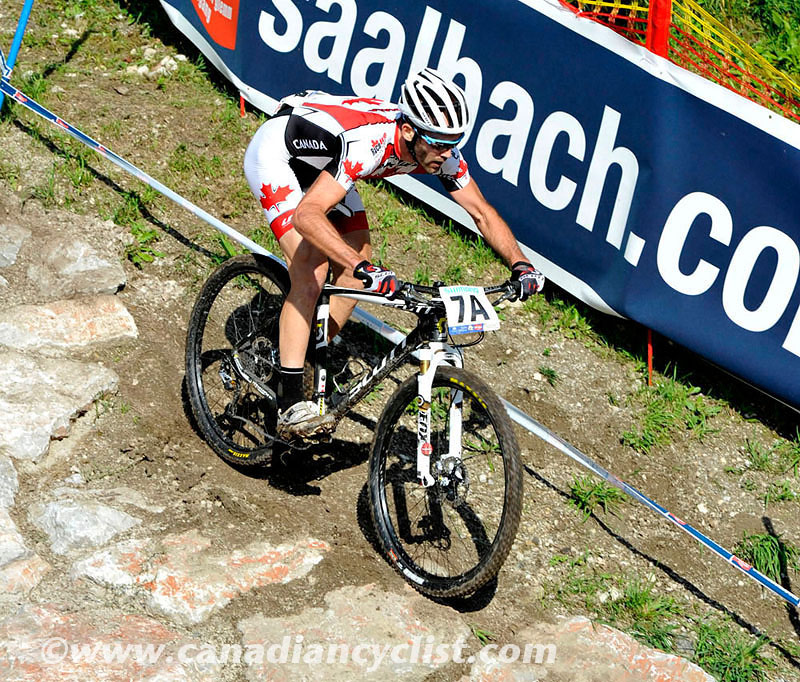 On lap three, the top tems all sent their female rider, with France adding to their lead with Olympic gold medalist Julie Bresset. Italy's Eva Lechner moved her country back into second, while South African Under 23 man Rourke Croeser moved into third, just ahead of Canada's Catharine Pendrel. Olympic women's silver medalist Sabine Spitz kept the Germany team in contention, in fifth.

The final rider was critical. France started the last lap seven seconds in front with Elite man Maxime Marotte, but Italy's very impressive Under 23 man, Braidot, caught the French rider and took the lead. Coming into the stadium finish, Braidot had ten metres on the French rider, but Marotte caught him in the final corner and the two sprinted for the finish line, with the Italian holding off the French rider by a bike length.

"I think you can either race with the elite man first or very last," explained Fontana. "We had a start loop on the gravel and then hit the course where it was narrow and singletrack, so having an elite man first was a good strategy. I knew I could be in the front straightaway, and then I just did my pace, and I think it was a good one. The last one was U23 rider Luca, who has already showed that he can have a quick lap Most of the other teams had the U23 first, so it was a bit easier for me."

The final German rider, Elite man Manuel Fumic, blazed through the field, moving from fifth to third in the lap to overtake Canada and South Africa. Switzerland's Ralph Naef moved his team into fourth, just ahead of Canada.