Day Two of the road races at the Road World Championships saw host Netherlands score their first world title with an absolutely dominant performance in the Elite women's race by Olympic champion Marianne Vos.  In the Under 23 men's race, Alexey Lutsenko (Kazakhstan) won a photo finish field sprint, with Canada's Hugo Houle finishing just out of the medals in fourth place.

The 177.1 kilometre Under 23 men's race started on wet roads, and in cold and misty conditions.  Three riders went away on the first lap - Tomohiro Kinoshita (Japan), Jesper Dahlstrom (Sweden) and Australia’s Michael Freiberg - building up an eight minute lead before the peloton started to chase.  Eight more riders bridged up, but the bunch soon after caught them.  The rest of the race saw numerous attacks, but nothing could break clear, and it became a race of attrition each lap on the Cauberg. 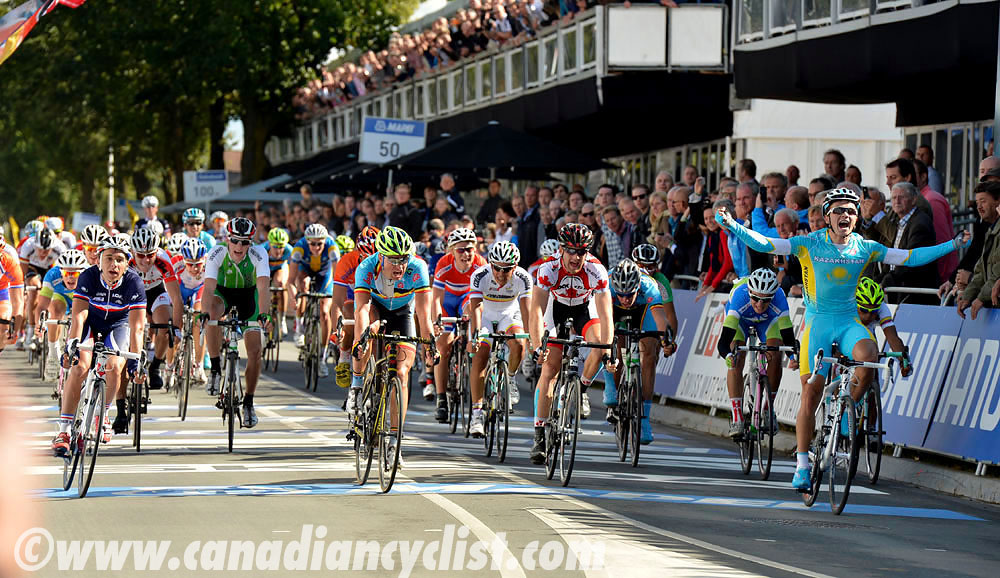 Over 50 riders came over the top of the Cauberg for the final sprint, with Houle admitting that he went too early, at 200 metres.  The Belgian rider Tom van Asbroeck hit the front with 100 metres to go, but was passed by Lutsenko on the left side of the road and Bryan Coquard (France) on the right.  (Note:  We have an interview with Hugo HERE)

Hugo Houle
"It went really well today. The race was 11 laps, and three guys broke away right from the start, so the race has started relatively quiet. Everyone was very nervous in the peloton, and there were a lot of crashes. With experience, we learned that it was important to sit back and be patient. The race really began with five laps to go. From that time, we went up to the front of the pack. As the race progressed, I felt better and better. It's been awhile since I had not race, so it took some time before finding my racing legs.” 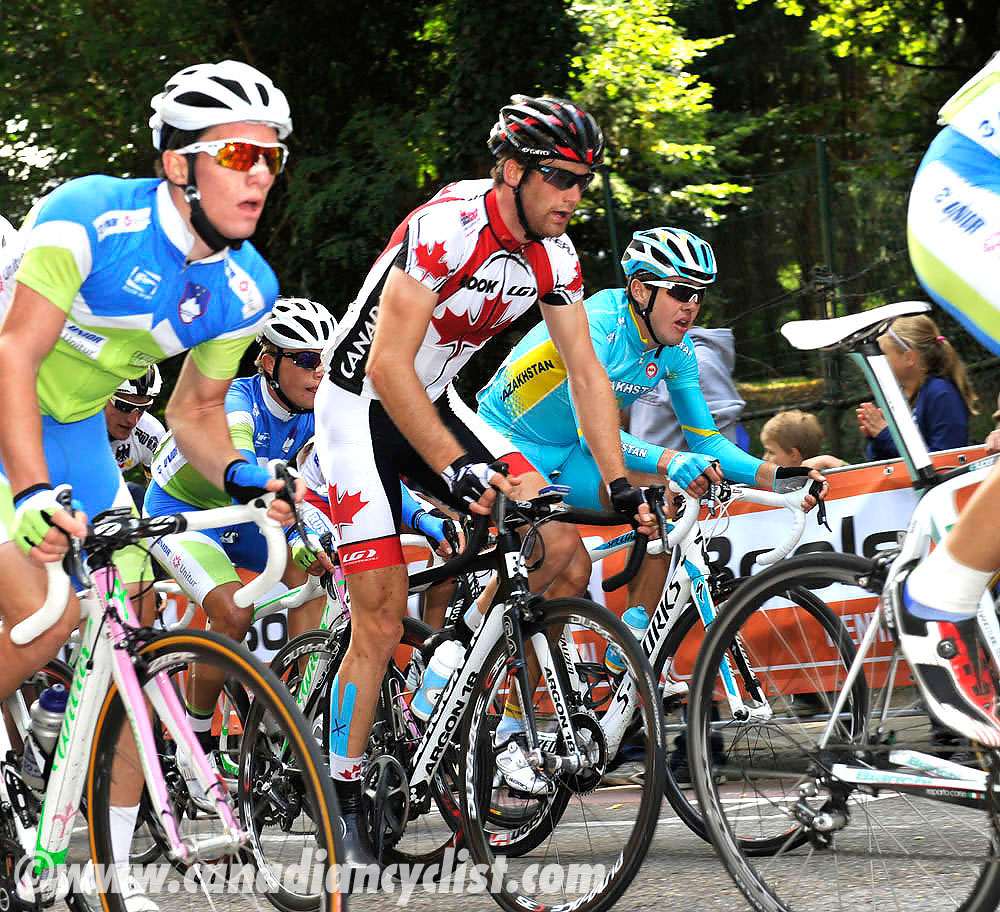 “During the last four laps, I always found among the first ten in the last corner before the big hill before the line. Climbing the hill, I was not too fast and I easily rode down, keeping energy.”

“Antoine Duchesne gave me a good hand in positioning me throughout the race, and David Boily also did a great job, but he had some bad luck, crashing with four laps to go. It is too bad because he too was in great shape, and he could have been a key element in a win. Antoine gave everything he had. I knew I was in the hunt within the last three laps, and I was very relaxed. I did not waste any energy and kept everything I had for the finale.”

“The peloton regrouped with two kilometres to go, and in the last two kilometres I was sitting in fifth, behind the Belgians. With 250 metres, I told myself that I had to go. I was leading the pack at the 100m mark, but I broke down. However, I would not say I left too early. At first, I thought I could have won by going quicker, but I would certainly have been caught by the guys in the back. Everything happens so fast... I did the best I could and it was a great race.”

“At the World Championships, everyone wants to perform, and I managed to deliver a good performance today. I am very happy for me, for my Team SpiderTech, for Canada. Everyone knew that we were capable of doing something special, and this proves it. We are all proud to have been able to produce something.”

The women's 129 kilometre race started slowly, and was marred at the end of the second lap by a crash that took down 30 riders and held up many others, including Judith Arndt (Germany), riding her final race.  Multiple attacks were neutralized by the strong Dutch, American and Italian squads, and it wasn't until the fifth (of eight) laps that a group of five broke away.

Amber Neben (USA), also in the final race of her career, was the main aggressor in the group, which also contained Rossella Ratto (Italy), Charlotte Becker (Germany), Rachel Neylan (Australia) and Anna van der Breggan (Netherlands).  The gap increased as high as 30 seconds, but van der Breggan was just marking time for Vos, as was Ratto for defending champion Bronzini.  Elisa Longo Borghini bridged across, putting two Italians at the front and shifting the dynamics.

Then Vos decided to make her move on the Cauberg at the end of lap six; it was explosive, and no other rider could follow her.  The Olympic champion flew across the gap to the leaders and, with van der Breggan and the two Italians working the gap quickly went over one minute and then up to two.  The race was clearly down to these six riders. 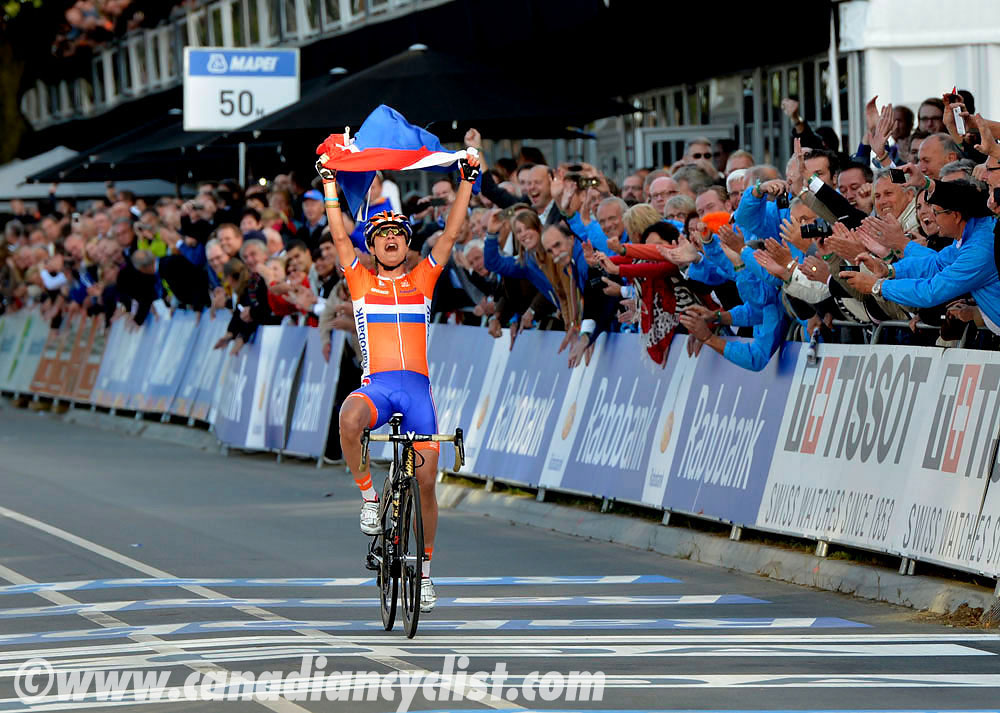 Vos wins - for more photos scroll to bottom of page

Vos was content to work with the others on the penultimate ascent of the Cauberg, but on the final climb she attacked hard and soloed in for the second world road title of her career, following five silver medals.

Joelle Numainville was the top Canadian in 13th place, sprinting in the chase group.  Leah Kirchmann finished in the next group, in 21st, and Karol-Anne Canuel was 30th.  (Note:  We have interviews with Joelle and Leah HERE)