I'm of two minds about The Secret Race: Inside the Hidden World of the Tour de France: Doping, Cover-ups, and Winning at All Costs; the new tell-all autobiography by Tyler Hamilton, with New York Times journalist Daniel Coyle.  On the one hand, it is an eye-opening account of the world of doping in professional cycling.  On the other, it reeks of self-justification and putting the blame on others. 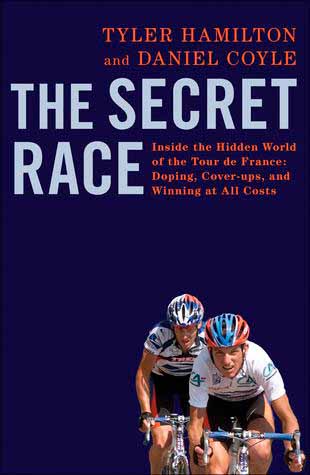 Hamilton was the 2004 Olympic gold medalist in the men's time trial, as well as having been a member of the Lance Armstrong's Tour de France squad during the first three of his Tour wins.  He was suspended for two years for a doping positive after the 2004 Vuelta and spent most of the following years denying his guilt, before finally confessing before a U.S. Grand Jury in 2010 and returning his gold medal in 2011.

Unlike the wretched Floyd Landis book, Positively False, or Landis' subsequent rambling and often incoherent accusations against Armstrong and most of the other members of the U.S. Postal squad at the time, Hamilton's book is fairly meticulous in its detailing of dates, locations and players.  This is due primarily to the rigorous fact-checking of Coyle, who states in the Preface:

I set out three ground rules.

1. No subject would be off limits.

2. Hamilton would give me access to his journals, photos, and sources.

3. All facts would have to be independently confirmed whenever possible.

All in all, it provides a damning indictment of pro men's road cycling during the late 1990's through mid-2000's.  Hamilton provides explicit details of how the doping system worked; both during his time with US Postal and then after when he moved to CSC with Bjarne Riis and, finally, to Phonak.

Of course, all of this pre-supposes that you believe him.  There is no proof other than the exhaustive details that Hamilton provides; details that Coyle has attempted to verify whenever another person is named or a particular event takes place.  For true believers of Lance it is all lies and, for true believers on the other side it is a 'told you so' document.  It is not likely to change many minds in either camp.

Hamilton's book is quite different to the memoir of another former doper, David Millar, a former world time trial champion who confessed to doping, served his suspension and is now back in the peloton as a vocal anti-doping spokesman.

Millar, in his book, Racing Through the Dark, talks convincingly of the pressures that led to his doping, but shies away from 'naming the names' that Hamilton does.  This, to me, is the great weakness of the Millar book - he still wants to be accepted in the peloton, whereas Hamilton at least recognizes that the entire system needs to be exposed.

Hamilton is quite clear that the decision to dope was his, and that he made it to join the 'A squad'.  For that, I applaud his honesty.  However, it is clear to me that his rebirth as an anti-doper was less about conscience than it was as a way to avoid legal penalties and, as such, his born again statements towards the end of the book leave a sour taste in the mouth.

I have to compare it to Paul Kimmage's A Rough Ride, which similarly traces the path of a rider into doping.  However, whereas with Kimmage you can feel the moral pain he goes through, and the subsequent decision he makes to quit racing (even though he has not been forced out by a positive test), with Hamilton it seems fairly clear that if he had not been caught, he would have kept racing (and doping) without much compunction.

He also does little to suggest answers to the ongoing problem of doping other than, basically, advocating 'just say no'.  I would have had more respect if he had written a book that said, 'I did it, this is why I did it, and I got caught'; that, while morally repugnant, would have at least been more honest.

So, the question is:  what is the value of this book?  Will it persuade young riders not to dope?  Unfortunately, probably only if they get scared that they might get caught.  Otherwise, it is more of an introduction to a system that rewards those that are willing to take chances.

This may be an important milestone in the battle to clean up cycling, however, it is not an inspiring one.