Ivan Ribaric had won two stages at the infamous stage race in 2008 and showed a strong performance today, adding a third Boomerang to his collection at the lap race in Smithfield today. Belgian rider Mike Mulkens came in second and the Australian 24H Solo World Champion Jason English finished third and will be racing the Australian Leader’s jersey for Stage 2. All competitors had to complete 5 laps on the technically challenging 6km former World Cup course. 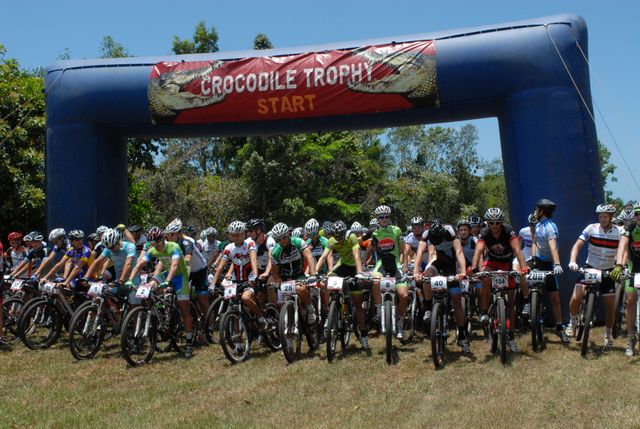 For the first time in Crocodile Trophy history a lap race kicked off the nine-day stage race in Cairns today. More than 130 riders were at the start, which included local Australian mountain bikers who competed with the stage racers in a public classification. Hosted by the local Cairns MTB Club the international field of racers rolled into Smithfield just before lunch time and the atmosphere was prickling with excitement.

Czech repeat stage win
All week all eyes had been on the Czech 2008 overall race winner Ondrej Fojtik, but it was Ivan Ribaric who quickly took the lead after the race start and kept it over five laps, crossing the finish line after 1:31.21. The pace among the lead riders was quick – Ribaric, Mulkens (BEL), Krenn (AUT), English (AUS), Fojtik (CZE) and Slezak (CZE).

Ribaric said that after winning two race stages in 2008 he was keen to perform well and kept an eye on his competitors at the start sprint.

“I knew I had to attack early and I kept pushing hard and attacking as soon as I felt them coming closer.” Ribaric praised the Cairns track and said he had fun out on track and enjoyed the technical sections, however, was very guarded in regards to his hopes for a possible overall win this year. “It’s only day one and I am happy about my win, but I want to stay on the ground. There are another long eight days to go. This was just the warm up stage and we’ll have to wait and see what tomorrow brings.”

Ribaric teamed up with fellow Czech racer and import business partner Ondrej Slezak, who is based in Sydney, to prepare for the event. The team manager of Rubena Rocky Trail Racing, who finished in fifth place today, was content with his team’s performance: “I raced the Crocodile Trophy last year and loved the challenge! So this year we have eight riders racing here, including a team of two in the new Adventure category, which they are leading after today’s stage. I’m very proud of the boys, they did well – not only do we have a stage win in our pocket, we had another two second podium getters in M1 and M2. Now the main thing is to recover well for tomorrow’s race.”

Last year’s overall fourth, Mike Mulkens, was in close pursuit of Ribaric throughout the entire race, however, dropping back by about 15 seconds per lap and crossing the finish in 1:33.09. “The pace right from the start was like fireworks, full gas for every rider! It was pushing and smashing it hard to be first in the field, because you needed at least a top-ten position in the start sprint for a victory today. I was happy when I heard that I was in second place after Ivan Rybarik. He was too strong for me, especially on that kind of track, which isn’t my favourite.”

Australian leader’s jersey awarded to Jason English
Third place went to the fastest Australian racer of the day, Jason English from Port Macquarie, who clocked in 1:33.30 after five laps. “I felt good today and kept riding, trying to stay in the front and to keep up with the number 1 [Fojtik] and 2 [Krenn] racers. I didn’t get any lap split times so was very surprised when they told me I got third when I finished.” His plan for stage two he said was to take it easy and hopefully get into a riders group that is happy to work and race together, because there was still eight days to go.

Wicked chase by Kate Major
The Australian triathlete and Iron-Man finisher Kate Major managed the most incredible pursuit of the day. By accident riding into the wrong direction – South – out of Cairns in the morning to warm up, Kate ended up 40 km away from the race venue. “When I realised I had ended up in the wrong direction I knew all I could do was put the thumb out and hope that someone would pick me and my bike up. I thought, the Aussie spirit is to help each other out and that I had hitchhiked a lot when I was a teenager to get around. I had a nice lady stop for me who offered to drop me off in Smithfield – wherever you are, thank you so much! I don’t know what I would have done without her!” 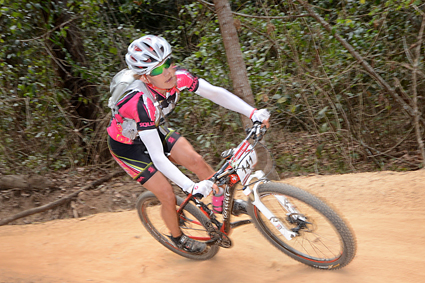 In the end Major’s gap was three minutes and with sheer determination Kate caught up to the field and started to overtake the other five female racers one by one. Kate won the female category on the finish straight after five laps in 1:58.50, beating second Alice Pirard (BEL) by only two seconds! Third was Jade Forsyth (AUS) in 2:13.01.

Stage 2 will start from the Cairns Lagoon at 9 am with the official riders presentation; race start will be at 9.30 am and the field of Crocodile Trophy riders and about 15 racers in the open classification will ride out on the 92 km marathon stage covering 2500m elevation across the Atherton Tablelands to Lake Tinaroo.

Ondrej Fojtik is the stage winner of today, crossing the line with a 7:58 minute gap to second Ivan Rybarik. Canadian Cory Wallace comes in third and the Australian Jason English unfortunately saw his race ending too early due to a fractured collar bone from an accident on the last kilometres to the finish line.

Yesterday’s stage winner Ivan Rybarik said that after the “prologue” race at Smithfield, today was the real start of the Crocodile Trophy 2012. Riders gathered at the Cairns Lagoon this morning ahead of the second stage had a 92 km marathon race and 2500m of elevation ahead of them. 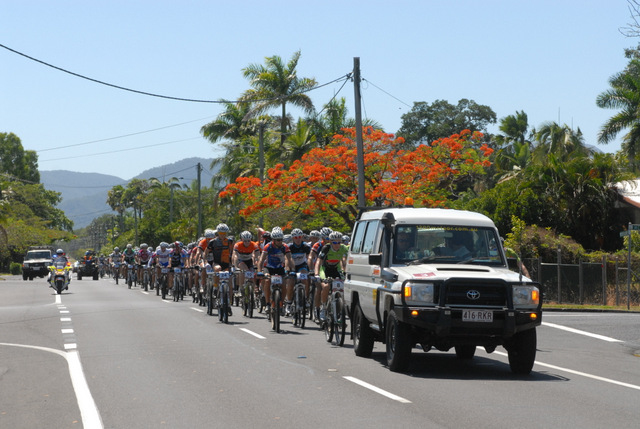 After a neutral ride out of the city, the official start was high above Cairns and the pace was quick right away. Austrian road racing talent Patrick Konrad sprinted ahead on the sealed road towards Copperlode Dam and had an immediate lead of about half a minute on a chaser group of 20 riders including yesterday’s top finishers in the elite and masters categories as well as a group of about 15 local riders from the Cairns MTB Club who participated in the new open classification.

Technical climbs challenge field
After crossing the massive Copperlode Dam wall, riders entered the rough gravel roads of Dinden National Park and the beginning of the massive climbs, which had been dreaded by some. The Austrian Konrad dropped back on the technical sections and a lead group of three riders formed with Ivan Rybarik (CZE), Wolfgang Krenn (AUT) and Ondrej Fojtik (CZE).

“My friend Ivan Rybarik attacked straight after the dam crossing and Krenn and I stayed with him until the first depot when Ivan suffered a flat tire”, said Fojtik later of how he and Krenn raced on. After 35km they had about a 2 minute lead on their chaser groups – the closest group was a trio with Cory Wallace (CAN), Jason English (AUS) and Mike Mulkens (BEL), because Rybarik had suffered another flat tire and had fallen back to a group of five riders, which included his team mate Ondrej Slezak. The group then worked together on the flat sections to make up ground. 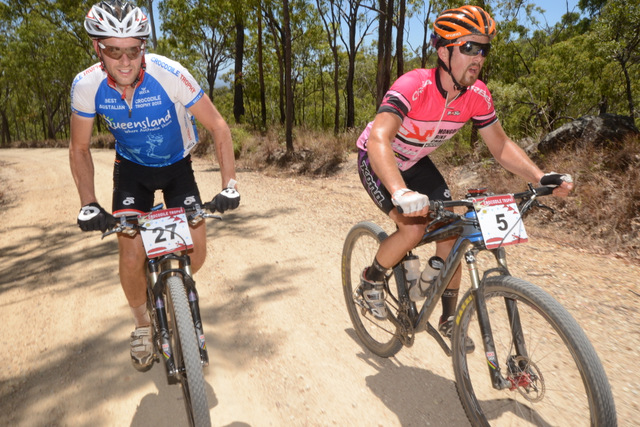 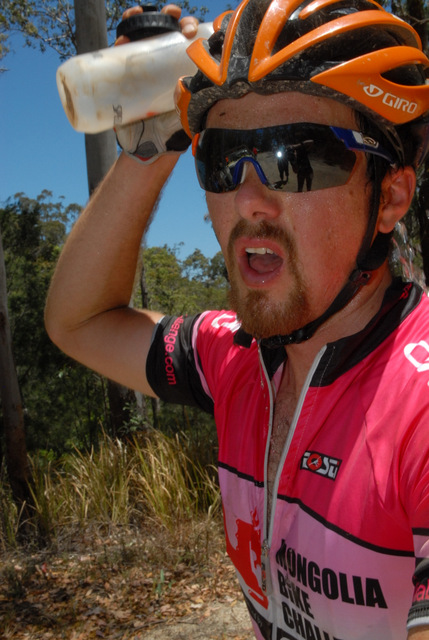 At the 50km mark it was still Fojtik and Krenn about 2 minutes ahead of English and Wallace, who had dropped a suffering Mulkens on the gruelling climbs in the midday heat, ahead of Rybarik who came closer with every ridden kilometre. As Rybarik picked up his pace, Krenn said his energy levels dropped. “I ran out of water with about 15 km to go until the second feed zone and the temperatures were relentless.”

So it happened that as Fojtik sprinted away from the feed zone, Krenn, English and Wallace with Rybarik in pursuit arrived together and started the final section of the race with a 3.30 minute gap to Fojtik, who increased his pace and crossed the finish line at Lake Tinaroo as today’s stage winner. “I had actually planned to save some energy today, but on the last climb I felt good and the thought of the leaders’ jersey was really motivating and kept me going”, so the content winner and new Croc leader at the finish.

English out of Crocodile Trophy due to injury
Of the chasers English was thought to be the strongest and as had Fojtik crossed the finish line, all eyes were on the tree line, looking for English and his Australian leader’s jersey. Instead, Rybarik charged into the event centre and across the line with a 7.58 gap and reported an accident on the last kilometres involving English and Wallace. Apparently in a narrow section of the already sealed road as they came towards the Lake Tinaroo campsite, a car coming towards Kauri Creek, struck Jason English and also Cory Wallace only escaped narrowly of being hit by riding off the road. Jason English was conscious and able to stand up and Wallace raced towards the finish to alarm the Croc Trophy medical crew who brought Jason English and his bike with a cracked top tube back into the event centre.

We are happy to report that Jason English is in good spirits and was sent to the nearby Atherton Hospital to get his shoulder x-rayed. A first diagnosis is a fractured left collar bone and Jason won’t be starting at stage 3 tomorrow. The whole Croc camp wishes him well and a speedy recovery.

Triathlete Kate Major wins female category again
The Australian endurance athlete from Sydney said that today’s stage was tough, however, that she really enjoyed it. Living for the past years in the US, it had been her dream to participate in the Crocodile Trophy and see here home country’s remote Outback – on her bike. “I’ve never done anything like this”, she said at Lake Tinaroo today. “I take every day as it comes, I’ve done so much racing, so this is my holiday. I’m here to have fun and to ride through those rainforests was just magnificent today. You won’t get that on a tourist bus, that’s for sure!”

“Where do the climbs start?”
This was the breathless comment of Jason Chalker at a section with a gradient of at least 20% as he rode towards the spectacular Lake Tinaroo today, the jewel in the crown of the Atherton Tablelands. He would soon have found them, as the riders passed the literally breathtaking sceneries of the Dinden National Park and with it also the highest point in Far North Queensland in Danbulla National Park.

Tomorrow’s stage after the official start in Atherton at 9am will take the riders on a very rough route through some spectacular river crossings, more steep climbs and descents into Herberton. The road into Irvinebank is said to be good but hilly, where the 111 km / 2700 m stage will finish.