Neither defending champion retained their title at the 2012 Elite Cyclo-cross National Championships on Saturday in Surrey, BC, as rain made the course a slippery and muddy crashfest.  Geoff Kabush (Scott-3Rox), after a two year absence from the Cross Nationals, returned to a career fourth men's title, while Mical Dyck (Stan's No Tubes) took her first ever national title (in any discipline).  Peter Disera (Cycle Solutions) won the Junior men's title, while Evan McNeely (Specialized) won his third consecutive Under-23 men's title.

The day began with damp and cool conditions, but no rain for the Masters categories.  Peter Lawrence (Soul Sportif) and Robert Orange (Ride with Rendall) rode the rest of the 50+ men off their wheels on the first lap and then traded attacks through the 35 minute race until Lawrence attacked with just over a lap to go, to solo in as repeat champion.  In the Masters (30+) women, Janna Gillick (Mid Island Velo Association) was clearly the strongest as she rode away from the rest of the field to win.

In the 40-49 Masters men group a group of four broke away early in the race - Marc Boudreau (Stevens racing p/b The Cyclery), Norm Thibault (Frontrunners), Andre Sutton (Hardcore Bikes) and Pascal Bussieres (Quebec).  They were joined briefly by Bob Welbourn (B.C.), who then dropped back after having to stop for a wheel change in the pits.  However, Welbourn put in an incredible ride to work his way back through the field from tenth.  Boudreau and Thibault had dropped the others, with Boudreau then dropping Thibault with two laps to go.  Welbourn went straight past Thibault, catching Boudreau in the final kilometre and then outsprinting him on the uphill finish to take the title.

In the last race of the morning session, the Masters 30-39 men, three riders separated themselves from the field - Aroussen Laflamme (Xprezo), Chris McNeil (Soul Sportif) and Martin Bojesen (B.C.).  Bojesen was the first to get dropped, and then Laflamme attacked and managed to get a gap on McNeil with two laps to go.  The gap never went above 20 seconds, but McNeil couldn't close it.  Laflamme had a bit of a scare in the final technical section, when he slipped and got his bars tangled in the course tape, but after frantically tearing it free he managed to hold onto a 14 second gap at the finish.

After a noon break, it was time for the world categories, starting with the Elite women and Junior men, who were on course at the same time (the Juniors started two minutes behind) for 40 minutes.  By this point it had been raining steadily for over an hour, and off camber sections were becoming all but unrideable, with riders slipping and skidding through most corners.  Dyck, who hadn't even pre-ridden the course the day before since she arrived late from working on the Island, broke away in the first lap with former champion Wendy Simms (Kona), leaving Pepper Harlton (Juventus CC) to chase alone, followed by mountain bike pros Emily Batty (Subaru-Trek) and Catharine Pendrel (Luna).  Dyck then dropped Simms within a lap to steadily open a 30 second gap.  Behind, Simms was holding onto second, but Harlton was caught by Batty and Pendrel with two and half laps remaining.  Batty then surged to move into sole possession of third after Pendrel crashed.  While Dyck was fully in control of the lead to win by 32 seconds, Simms was in definite danger of getting caught, but managed to stay away at the finish by a slim seven seconds.  (Note:  We will be posting a video interview with Mical Dyck) 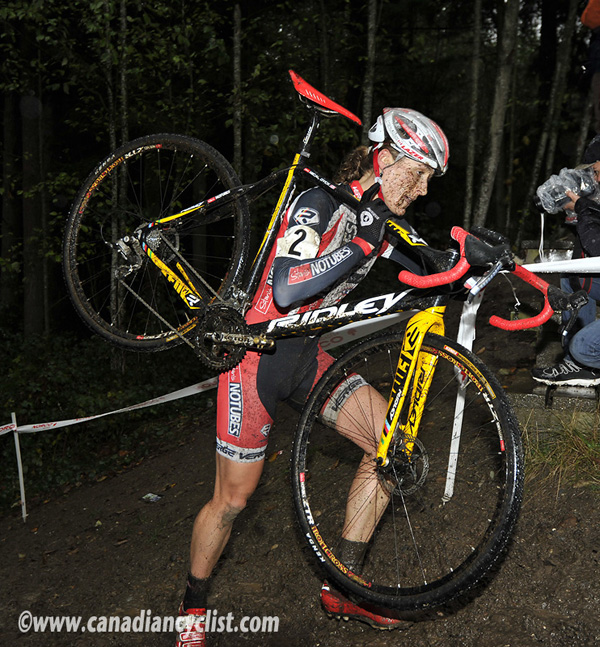 The Junior men's race saw one of the biggest battles of the day between Disera, Trevor Pearson (dEVo), Willem Boersa (Team Manitoba) and Isaac Niles (Team Alberta).  No one could gain more than a few seconds on the others, with Disera and Pearson pushing the pace most.  These two managed to get a small gap in the final lap, with Pearson attacking in the final kilometre, only to crash in the last technical section, enabling Disera to squeak by for a two second gap and the national title.  (Note:  We will be posting a video interview with Peter Disera). 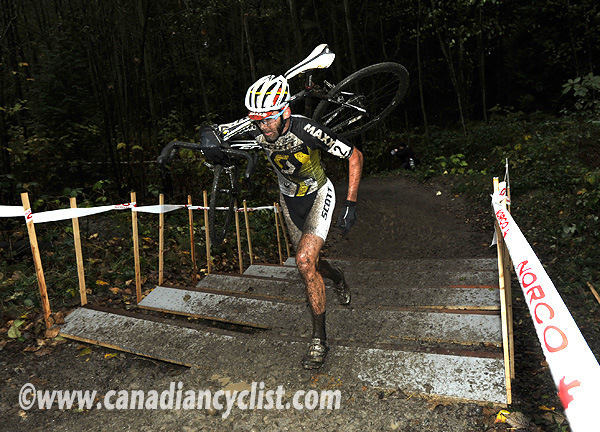 Geoff Kabush was well out in front by Lap 3

The final start of the day was the Elite and Under 23 men, with the U23 riders beginning two minutes behind the Elites.  The rain backed off through the race, finally stopping with 30 minutes to go.  However, the course remained sloppy, and the damage of hundreds of tires made almost anything with a slope on grass unrideable.  A small group formed at the front of the Elite race on the first lap, with Kabush joined by defending champion Chris Sheppard (Rocky Mountain), Derrick St John (Stevens Racing p/b The Cyclery), Andrew Watson (Norco Factory), Craig Richey (Connected.com) and Cam Jette (Scott-3Rox).  However, Kabush was riding head and shoulders above the rest of the field, dropping everyone on the second lap.  The group behind blew apart, with Sheppard and St John chasing together for the remaining podium spots.  Kabush steadily powered away, going into an aero tuck on the paved sections, and was over a minute up with a lap to go, and nearly 90 seconds ahead at the finish.  Sheppard dropped St John to take silver.  (Note:  We will be posting a video interview with Geoff Kabush)

The Under 23 race saw an impressive Evan McNeely ride away less than six minutes into the race.  The 'other' Evan - Guthrie (Rocky Mountain) - got the holeshot, but could not hold McNeely's wheel as he rode away, catching over half the Elite field in the process.  McNeely finished 48 seconds ahead of Guthrie for the title, with Andrew L'Esperance (Norco Factory) in third, a further 28 seconds in arrears.  (Note:  We will be posting a video interview with Evan McNeely)

- Many of the top riders say that they plan to attend the Worlds in Louisville, Kentucky, at the end of January.  Geoff Kabush and Chris Sheppard both plan on racing.  For Kabush it will be his first 'Cross Worlds, while for Sheppard it will be the final race of his career.  Mical Dyck hopes to go, depending upon finances, Peter Disera will race, as will Evan McNeely.