The Champion System Pro Cycling Team got its 2013 season underway Friday with a team launch that featured a number of dignitaries from the Los Angeles Asian community, other invited guests and a host of media at the Home Depot Center in Carson, California.

A 22-rider roster was revealed featuring five current national champions from Canada, China, Ireland, Japan and South Korea. In all, the second-year squad has riders from 14 different countries, making it one of the most international-flavored teams in professional cycling.

"In our inaugural season last year, we accomplished our goal of making the dream of having the first Asian-based pro cycling team a reality," Champion System General Manager Ed Beamon said. "Our 2013 team is more mature and we have raised the bar in terms of our expectations of the riders and our goals. Each rider has been hand-picked not only for his ability to perform on the bike, but also for his ability to adapt to our multi-cultural roster.” 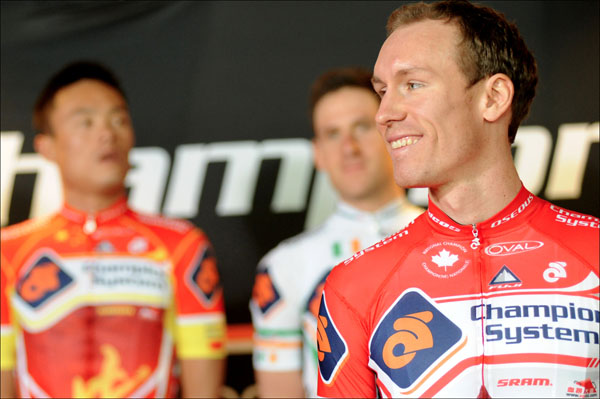 Scott Kaylin, one of the founders of Champion System, said the Chinese-registered team will certainly build on a successful inaugural season that saw it win five races as it competed on several continents.

“Our passion for cycling is what started Champion System and that same passion led to the creation of the Champion System Pro Cycling Team," Kaylin said. "From that first moment, we knew our team was creating history and there could only be one Asian pro cycling team that could lay claim to being the first. In a short time, the team has already showcased our company and brand to a worldwide audience. Now we're aiming for higher goals in 2013."

Friday’s team launch was hosted by acclaimed sports broadcaster Bonnie Bernstein, the “voice of Ironman” and Vice President of The Active Network Mike Reilly, and cycling commentator and USA Bicycling Hall of Fame member Todd Gogulski. In addition to dignitaries from the Los Angeles Asian community, several representatives of consulates for Japan and Malaysia attended along with members of the Chinese Chamber of Commerce and the Asian Business Association.