The British newspaper, The Sunday Times, has placed a display ad in the Chicago Tribune that is an open letter to Oprah Winfrey, asking her to ask Lance Armstrong tough questions during their interview this week.

Signed by chief sports writer David Walsh, the letter asks Winfrey to ask ten specific questions of Armstrong, and includes the Twitter hash tag #AskLance.  The ad also notes that The Sunday Times is suing Armstrong for $1.5 million to recover a libel settlement Armstrong had won years earlier against the newspaper.

In addition, the newspaper has republished an article and video by Walsh on the Armstrong expose - Lance Armstrong:  Drugs, denials and me

The questions on the Chicago Tribune ad are:

1. Did you tell doctors at the Indiana University Hospital on October 27, 1996 that you had taken EPO, human growth hormone, cortisone, steroids and testosterone?

2. After returning from cancer, how did you justify putting banned drugs in your body?

3. Did you have any sympathy for those rivals determined to race clean?
Article continues below

4. Do you regret how you treated Betsy Andreu, your former masseuse Emma O'Reilly and Greg LeMond?

5. Do you admit that your friend Dr Michele Ferrari fully supported your team's doping?

6. Is it your intention to return the prize money you earned from September 1998 to July 2010?

7. Did you sue The Sunday Times to shut us up?

8. Was your failure to understand Floyd Landis the key to your downfall?

9. Do you accept lying to the cancer community was the greatest deception of all?

10. Why have you chosen Oprah Winfrey for your first interview as a banned athlete? 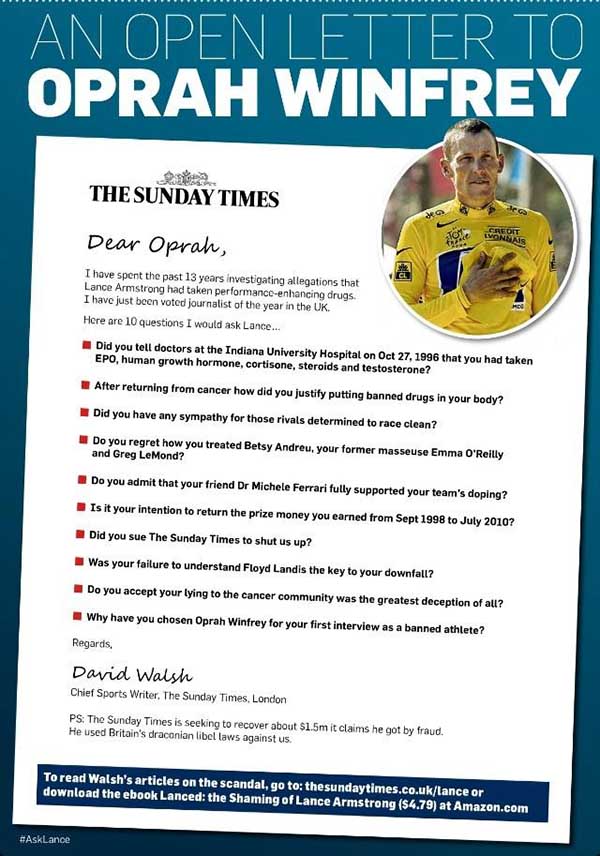