“The official launch of Cannondale Pro Cycling this past weekend was a celebration of our athletes and all things Cannondale,” said Bob Burbank, Global General Manager, Cannondale. “There’s no denying that we love to win, but it’s not just about crossing the finish line first, but how you get there. Riders all over the world can be proud to be a part of the Cannondale Pro Cycling community.”

“We’re ready for a new global challenge” said Cannondale Pro Cycling team manager Roberto Amadio “with a prestigious brand as Cannondale. This event was something never seen in cycling, a new and fresh style. Our hope is to transfer this way to be on the road with a lot of success”.

Event attendees were given an exclusive sneak peek of what the upcoming 2013 season will bring and were first to see the new Sugoi kit and team Cannondale SuperSix EVO. Additionally, Peter Sagan was awarded the best finish for his “Forrest Gump” celebration at the 2012 Tour de France.

Following the team launch, guests had a unique Hollywood experience with a tour of the Paramount Studios sound stages. The night ended with a party on the Paramount Studios New York City set that included food and drink from the home countries of many of the team’s riders and music spun by DJ Mick Boogie.

The 2013 team presentation was part of a four-day team camp in Los Angeles. The members of the Cannondale Pro Cycling team in attendance trained on the award-winning Super Six EVO on and around the local roads of Thousand Oaks and Malibu, preparing for the rapidly approaching start of the 2013 season. In addition to the SuperSix EVO, the team will be riding the Slice RS this season. Responding to feedback for a lighter frame without losing stiffness, Cannondale has created an aero bike with weight savings of approximately 1.4 kilos from last year’s version. The Slice RS is now 300 grams lighter in just the frame, with additional weight savings from lighter components such as Vision wheels and aero handlebars.

Cannondale Pro Cycling has an impressive international roster and is set for success this upcoming season. With the combination of Ivan Basso, winner of the 2010 Giro d’Italia, alongside 22-year-old Peter Sagan, winner of the Green Jersey at the 2012 Tour de France, Cannondale Pro Cycling is made up of both new and seasoned riders. Elia Viviani and Moreno Moser remain integral parts of the team, along with American Ted King. The team will see a number of notable new riders as well, including Lucas Sebastian Haedo (Arg), Cameron Wurf (Aus), Matthias Krizek (Aut), Guillaume Boivin (Can), Brian Vandborg (Den), Michel Koch (Ger), Alessandro De Marchi (Ita) and Nariyuki Masuda (Jpn). 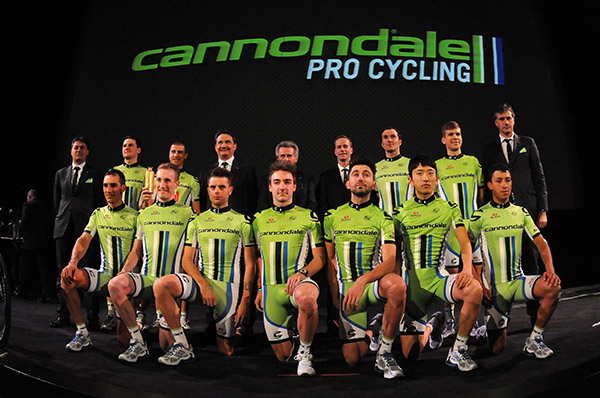