Canadian riders Matt Hadley and Benoit Simard of Team Xprezo are riding the TransAndes Chile stage race in the two-man team category, which they are leading.  This is their report for the 77 kilometre fourth stage, where they took their fourth consecutive category win, with a time of 3:49.

For this stage we had a neutral start, which is not my favorite thing to do as there was a ton of dust and we were being led by a quad, which was not a constant speed at all.  Benoit and I got right to the front to avoid the dust and be out of harm's way in case anything happened in the peloton.  After the 5 km of neutral we cranked the pace up and dropped a few people, but were still a big group of 40 riders. 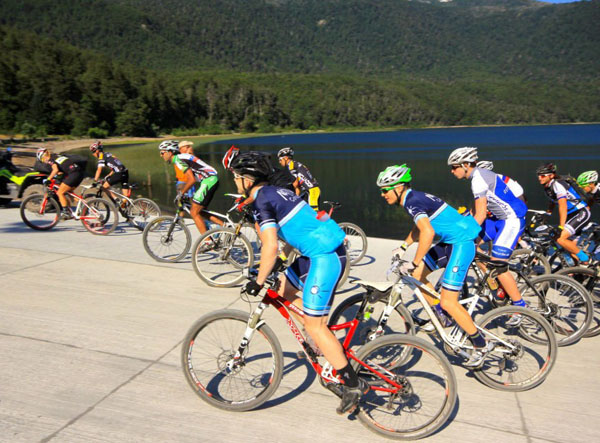 Benoit Simard and Matt Hadley at the start of Stage 4

We rode through some small villages with the locals cheering us on, and at one point a pickup pulled out in front of a tractor and I was able to draft it for a while, which was quite fun.  Then we hit the hills and got a 5 second gap on the three teams that were chasing us.  They were riding strong so we put the hammer down to get out of sight.  We climbed for almost 2 hours, some of it was super steep, but in the trees with good traction.

Finally we came to a singletrack climb which was really challenging and we did have to push a bit.  At the top we started a really fun singletrack descent, and cruised along on it for 30 minutes.  At one creek crossing there was weird flagging and we went the wrong way hiking our bikes up the hill.  By the time we figured it out Mike and Mary were there, and they were absolutely killing it.  We rode with them for a while chatting, glad for some company.  At this point there was a beautiful mountain lake with massive hardwood trees all around it and we rode on the beach for a while.

The next descent was fast and really dusty, Benoit was following me and had to give a 30 sec gap or so.  There were some fun natural jumps on it and I got some air time for the camera crew.  The descent opened up to fast gravel roads, followed by ripping through farmers fields, terraced cow pastures, cow paddocks, and right through the barn yards themselves.  Finally we arrived at the river, and crossed it on a suspension bridge that was 150 metres up in the air and about 200 metres long.  It was a pretty rickety thing with lots of gaps in the thin planks.

Then we started the pain train to the finish, or as Benoit calls it "le train de silence", meaning no talking, just pedaling hard into the headwind on the washboard road, bumping our way along.  We made it to the finish ahead of the big chase group, so we were happy with our effort and to hold on for the win.

For prizes we are getting really cool hand made local Chilean gifts.  So far we have 2 flutes made out of bamboo and cow horns, and a massive wooden beer mug.