Canadian national Under-23 champion Evan McNeely was the lead Canadian rider in his category at the 2013 Cyclo-cross Worlds in Louisville, Kentucky, until disaster stuck.  Evan talks about his race.

A world championship cyclo-cross start makes a world championship mountain bike start look like a royal tea party. I have never been that compressed into a starting grid, spots were being decided before the gun even went off. After the gun blew, starting grid tactics were traded for ruthless wheel chopping, hip nudging and bar bashing. I actually feel a little bad about some of the moves I pulled, but then again, I’m really not. 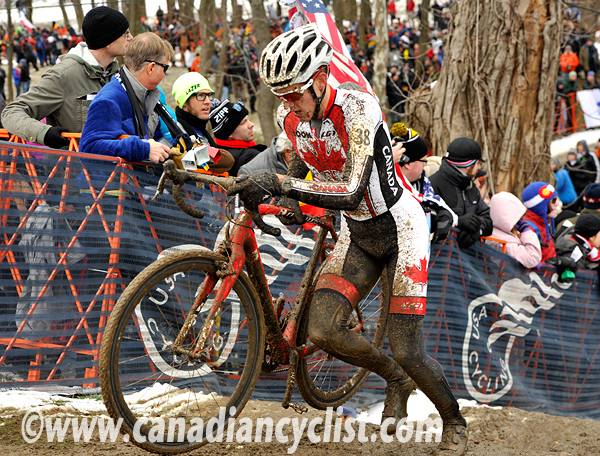 With the morning snow slowly melting under the mid-day sun, the course conditions were a mix of frozen ruts and slick mud. With all the off-camber technical sections, the race was set to be won by a good bike driver and just the guy with the biggest engine. 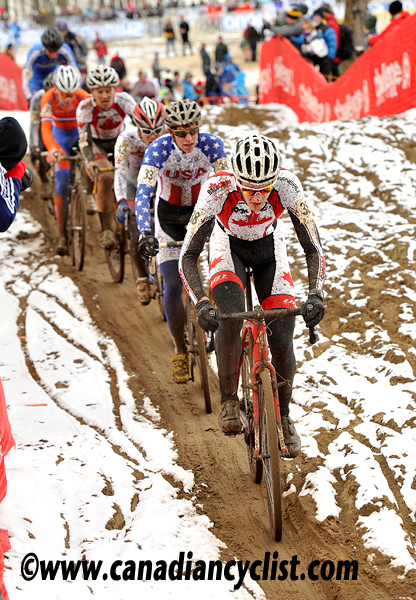 I didn’t have the greatest start, coming through the first lap in 26th (11 places off my goal), but felt good and ready for the mid race charge. I made some progress here and there, but lost a lot of time in tricky sections that I just don’t have any experience in riding. I continued to trade spots when possible but failed to make any definitive progress. With two laps to go I got set to put out a final drive, when, following a Dutch rider through a long rutted straight stretch, I got shot off course by a frozen rut straight into the metal fencing.

Most often when crashing, my first reaction is to get up and get moving again. This time, however, I needed to take a serious five! I hit the fence in such a way that I knocked the first one over only take the full stopping power of the second. I got the wind knocked out of me, and hunched over the fence for a good two minutes,  chatting with these Belgian gentlemen in between gasps for air.

I thought there was no way I didn’t crush my collar bone into a thousand pieces, so I checked for mobility and felt no pain. Deeming myself ok to proceed; I realized my brake was seized closed, so I picked up the bike and just started running. I only just made it to the pit when the race leaders started coming around, my race was as good as done.

I owe huge thanks to the national team staff, the highlight of the week being the Canadians running the only pressure washer in the pre-ride as well as the solid long term development coaching ideas. Nobody could race cross without the mechanics today.

Lastly, if we want to see more Canadians rock the top ten and podium moving forward, it needs to be possible for athletes to take cyclo-cross as their primary discipline and race in Europe. Only then will anybody be able to gain the weird, specialty skills required to race at this level.