The peloton showed no panic when a three rider breakaway had a four minute gap with 23km to go at the 4th stage of Tour of Qatar. Perhaps on a different parcour, that wasn't so flat, a breakaway might have a chance to stay away until the finish.

Instead, the breakaway was methodically reeled by a hard charging peloton in with 8km to go, and Omega Pharma - Quick-Step Cycling Team let other leadouts battle each other for sprint position until the perfect moment in the final kilometers. Despite the aggression from other teams to prepare for the bunch sprint, Mark Cavendish was able to get another victory, and the fifth for OPQS in three disciplines in 2013. 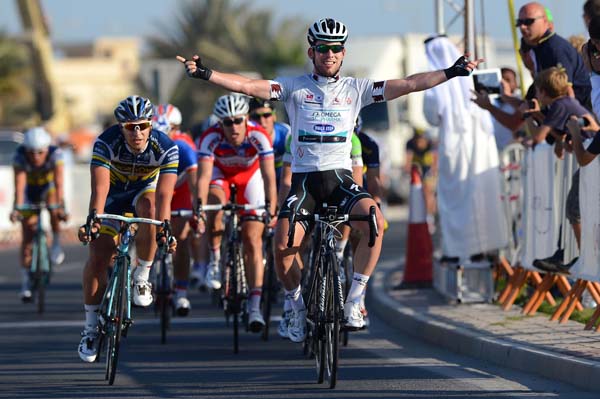 "We were a little bit nervous about the breakaway," Cavendish said. "We started to ride - two of our guys, two from BMC, and one from Vacansoleil - and with the break only being three riders it's kind of too hard to control. But when we started riding, we started pulling them back really quickly. That was a really strong group out there. There wasn't enough wind to split the peloton but enough to keep it from being easy riding. It looked like it wasn't coming back, but with 12, 13 kilometers to go teams really went to the front to bring everything back. When that started, there was a headwind and it looked like it was going to be a bunch sprint. There were only about three of us left at that point because we'd been working to bring the break back. Zdenek Stybar did a perfect job with 5km to go, and then Matteo Trentin put me in perfect position in the last roundabout at the 1.5 kilometer point. Niki Terpstra found me with a kilometer to go and moved me into the top 15, and I used the same tactics I did last year when I won on the same stage. The wind came from the right, everyone goes right, so I went left, and was shielded. So, I got the perfect position and acceleration in the sprint to get the win."

Cavendish also took over the overall lead through the stage win by 2 seconds. Brent Bookwalter (BMC Racing Team) is now 2nd, and his teammate Taylor Phinney is 3rd by 8 seconds. Still, OPQS and Cavendish will take it day by day, as they did going into the stage on Wednesday.

"I think tomorrow is the main stage of the Tour of Qatar," Cavendish said. "We will see what happens, and then Friday is the last day, but we'll keep going for the stage wins and see what comes from that. I am really, really happy right now. Three wins already, shows me, and shows Patrick Lefevere, that I made the right move to Omega Pharma - Quick-Step. I get along really well with the guys already. I am really happy with how things are going. We have a good ambiance with the team. I hope this can continue and we can keep getting good results this year."