For its fourth edition, some of the best riders in the World showed up for the start of Stage 1. An unprecedented field of champions including three former Tour de France winners: Alberto Contador (TST), Cadel Evans (BMC) and Bradley Wiggins (SKY), as well as last year’s winner Peter Velits (OPQ) and contenders such as Froome (SKY), Nibali (AST) and Rodriguez (KAT). 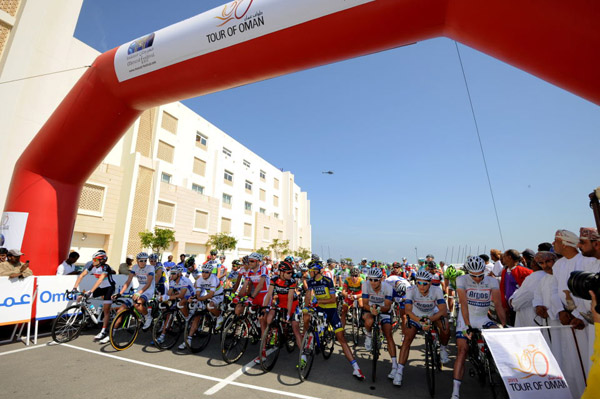 Riders line up before the start - photo ASO

142 riders representing 18 teams took off just after noon for a 162km stage from the Al Musannah resort, all the way to the Sultan Qaboos University. Right after the first kilometre, two riders broke away from the pack: Traksel (CSS) and Uchima (JPN). Their lead grew rapidely, from 1:30 at km 5 to a maximum 9:25 at km 39. Traksel was first to reach the top of the first climb of the day at Rustaq (km 45.5) ahead of Uchima while the pack led by Stamsnijder (ARG) remained 9 min adrift.

The front two carried on their progression towards the south and then the west. They reached the first intermediate sprint (km 65) won by Traksel ahead of Uchima and Rollin (FDJ) with a 6:45 advantage. While teams Argos-Shimano and Orica GreenRDGE continued chasing, the gap dropped down to 5:20 at km 104.

The second bonus sprint was again claimed by Traksel ahead of Uchita and Colbrelli (BAR) while the pack was 2:30 behind. At km 134, Uchita powered away as Traksel stopped his effort. The Japanese rider could still enjoy a 1:20 lead with 25 kilometres to go, and 52s, 20 kilometres from the line. 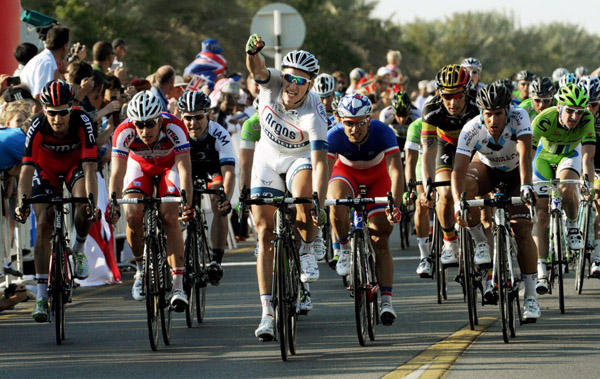 The last escapee was finally caught at km 147. From then on, the pack remained bunched all the way to the Sultan Qaboos University where a “battle royale” was to take place. Winner of two stages last year, Marcel Kittel (ARG) proved once again he was the master when it came down to a bunched sprint. The German beat Appollonio (ALM) and Bouhanni (FDJ) to the line. Kittel captures both the overall leader’s Red Jersey and the points’ standings Green Jersey. He also leads the best young rider classification while Traksel is the most aggressive rider.