After yesterday’s demanding stage up to the Green Mountain, it was an early start for the 141 remaining riders of the Tour of Oman for stage 5 of the event. While former race leader and two-time stage winner Peter Sagan was forced to quit, ill, the pack took off just after ten o’clock for a 144kms ride to Boshar and the Ministry of Housing.

The race conditions were ideal.  Cloud cover created cooler conditions than the preceding days, ideal for a cycling race and the difficult stage it would be. Is Excellency Sheikh Mohammed Al Wahibi, member of the Shura Council opened the 5th stage of the race from the gates of Al Alam Palace in the heart of Muscat. 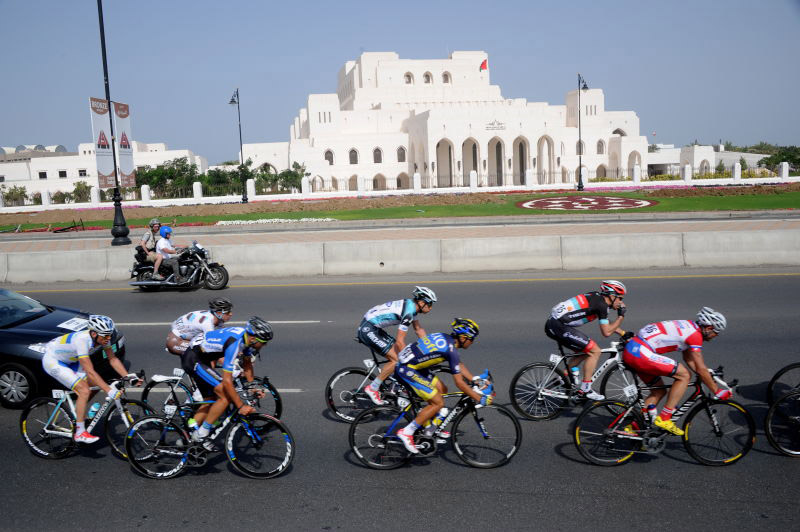 With Chris Froome leading the Overall standing heading into this fifth day, the British supporters in Muscat began to take to the raod.  “Most of the kids with me are from British school in Muscat - although not all British. They're here to experience cycling. The Olympics has given them all a base of knowledge for sport. The all think it's brilliant that they can meet Bradley Wiggins and Chris Froome here. It's inspiring for the younger generation and exciting for the parents, too. We also have two little girls that have been interviewing the riders All of them have been great with there time. It's really fantastic that this is on our doorstep.” Stated Helen Graham.

Abdullah Said Al Busaidi, aged 14 stated that he had persuaded his whole family to come down to the start line. “ I have always loved sport, but football has never held that much appeal and I became hooked on the Tour after last year. I hope this Tour provides inspiration to set up a proper cycling school as it is my dream that one day we have an Omani who could beat Contador.”

First at the top of the first climb of the day at Boucher Alamrat (km 102) was Hernandez in front of Stybar and Schillinger while the pack remained 2:35 adrift. On the second climb of the hill, the real battle between the favourites started. Again Hernandez was first to the top (km 116.5) in front of Stybar and Van Avermaet with a slim 15s lead over Contador (TST) and 18s over Froome (SKY).

All the breakaway riders were finally caught at km 120. On the third and final climb, Contador continued attacking, never quite getting rid of Froome, while Green Jersey Gallopin (RLT) and Wiggins (SKY) were dropped well behind. Three men managed to breakaway: Contador, Rodriguez and Froome reaching the top in that order. Their gap grew in their final descent heading back towards Muscat on a group of 7 men including Cadel Evans. With 3 kilometres left, the front three had a 20s lead over the Evans group. It finally came down to a three-man sprint won by Froome, in front of Contador and Rodriguez, Evans crossing the finish line just 4s adrift. 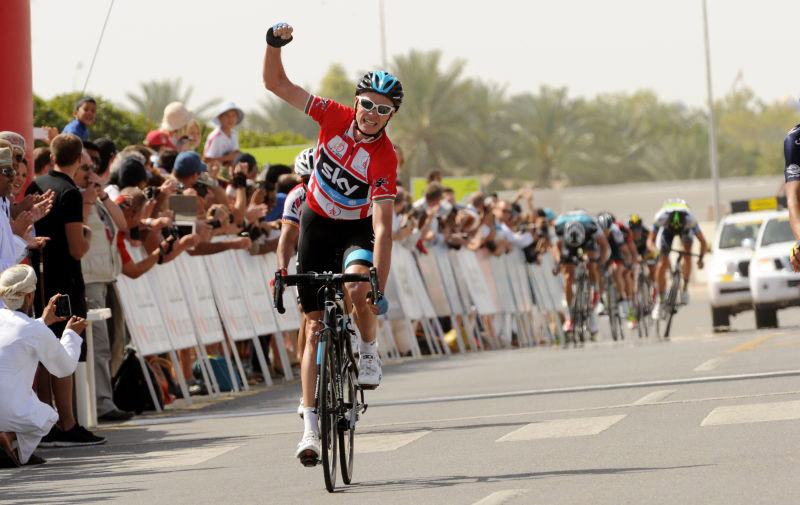 In the new overall standings, with one stage to go, Froome now has a 27s lead over Contador and 39s over Evans.

Suleiman bin Hamed Al Harthi, Head of Islamic Banking was the guest of honour at the finish line at the Ministry of Housing stating “to watch the battle across the line was exhilarating. The profile this race has given Oman is impressive and it is testament to the hard work of the organisers that the top riders all wanted to race here.”

Tomorrow’s sixth and final stage will will witness the race finale on the Matrah Corniche. Starting at Hawit Nagam Park in Quryat, at 1140 am the peleton will have one modest climb at Al Mishaf before heading back into town for a three lap circuit of the Corniche.

Results from the fifth stage in Oman