Anyone who has attended a Road Nationals in recent years will have seen Matt heavily involved with the organization of the event, but his duties went far beyond that, including coordinating much of the scheduling of the national road team on projects such as the world championships. Prior to joining the national federation, Matt cut his teeth at the Ontario Cycling Association in a similar role.

We spoke with Matt recently from his office at the UCI Headquarters in Aigle, Switzerland, after his first month on the job. 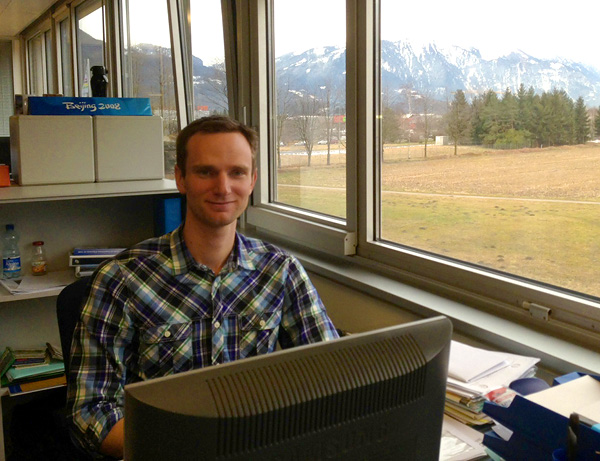 Matt Knight at his desk in Aigle

Canadian Cyclist: How did this job come about - were you approached, did you see an employment ad?

Matt Knight: The posting was on the UCI website, which is where I learned about the job. Then I went through the application process and that's basically how I got the job. Pretty straighforward.

CC: What exactly is the job?

CC: So not the Pro Continental, WorldTour level?

MK: Not the WorldTour level, there's another coordinator that deals with the ProTeams on the men's side.  I do work with the Pro Continental teams.

CC: Okay, for events like the world championships you are involved with technical things, like courses, schedules and so on, but what about with the teams, what about that part of your job?

MK: I'm involved with the registration process for the teams, we have quite a few around the world. For the women, there are over 30 teams and for the men well over 100 Continental men's teams, so it is quite a lot of work to get all of those teams affiliated with the UCI. We have to work with the national federations through that process, which I had been doing with Cycling Canada (for the Canadian Continental teams) for UCI registration.

CC: So quite a bit more travel now, I'm assuming?

MK: Yes, yes, there will be quite a bit more travel. I just got back from Florence, Italy, for the [2013] Road Worlds site inspection, and coming up there is Nanjing [China] for the 2014 Youth Olympic Games, and then also a Rio site visit coming up for the 2016 Olympic Games.

MK: That's a good question! I don't have the answer right now, but, yes, that is something I would like to be involved with if possible. But at this time I'm not exactly sure of who that falls under.

CC: You've been with the UCI about a month now, and it must be quite a bit different working there then at a national federation. What sort of things have you noticed at the international level; as opposed to being someone who has to respond to UCI requests, now you are the guy sending out the requests.

MK: Certainly the volume of the calendar and the teams. When you are in Canada, and focussing on the Americas Tour, and the number of teams there ... I was aware that the European Tour was bigger, but it is significantly bigger in the sheer number of races and teams. You see the number of organizers and the teams, and that opened my eyes right away. And the lead up to the [Olympic] Games. It's four years away, but it's already started. When I came in there were already site visit reports to review.

CC: What made you decide it was time to leave Canada and move to the UCI?

MK: The job description matched closely with what I was doing at Cycling Canada, so it felt like a really good fit to use what I had learned, first with Ontario Cycling and then with Cycling Canada, and to be able to take on the challenge of the world championships and the Olympic Games.

As a career path within cycling there are very few of these types of jobs, so I've been fortunate that they've opened up when my experience matched the job description. In the month I've been here I've been working with the most experienced people in cycling, so I've already learned a lot. I'm looking forward to the challenge of my first year.

CC: How are you enjoying living in Aigle?

MK: I'm living in town here, I'm enjoying it. I like the outdoors, and the Swiss lifestyle is very geared towards being outside and enjoying the mountains, which are literally at the doorstep. I'm a downhill skier and everything is right here, and I've heard great things about the summer.

It seems like endless opportunities to ride your bike around here. One thing is the weather, I didn't realize it was so mild, so it's been really easy to adjust, when I'm getting messages from Ottawa with the -35 [Celcius] temperatures.

The welcome at the office has been great, and I'm extremely happy with the move.