The first titles of the Canadian National Road Championships in St-Georges, Quebec, were awarded on Thursday with the Individual Time Trials for Elite and Under-23 men and women.  Joelle Numainville (Optum) took the Elite women's title, while unheralded Curtis Dearden (Russ Hays - Accent Inns) won the men's.  The Under-23 titles were awarded to Jasmin Glaesser (TIBCO) and Alex Cataford (Garneau-Quebecor), both of whom also finished third in the Elite category. 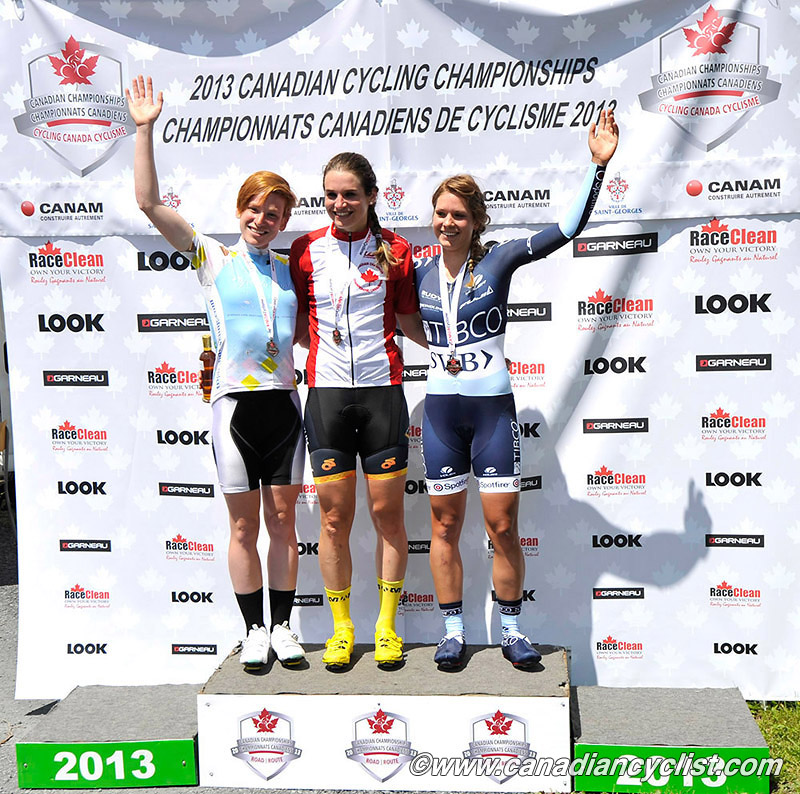 Link to more photo galleries at bottom of page

It was a given that new champions would be decided at the Canadian Road Nationals Individual Time Trials for men and women, since the defending champions for the past few years were absent.  On the women's side, Clara Hughes has retired, while Tara Whitten is taking a hiatus from the sport after the Olympics last year.  For the men, Svein Tuft (Orica-GreenEDGE) has dominated for most of the past decade, with Ryder Hesjedal (Garmin-Sharp) also making an appearance, but both of these riders (plus David Veilleux) are preparing for the Tour de France and not in attendance.  So, the champion would be a new name, however, some of the riders challenging for the titles were completely unexpected.

The women covered 27 kilometres of an out-and-back course, with one extra jog down a side road on the way back.  Being in the Beauce region, there was very little in the way of flat pavement - riders were either climbing or descending, usually on rough rough pavement.

Laura Brown (Colavita) set the first sub-42 minute time, but she was quickly surpassed by the completely unknown Victoria, BC, rider Anika Todd (Tripleshot Cycling Club), who knocked an astounding 1:09 off the leading time.  The 23 year old Todd was racing in local races as little as three weeks ago as a Cat. 3 rider, and only switched to cycling from middle distance running at the beginning of the season.

As rider after rider finished, Todd's time continued to hold up.  Glaesser was closest, but still 19 seconds back, while Denise Ramsden (Optum) was 25 seconds behind.  Finally, it took the second from last rider, Numainville, to push Todd into second place by 20 seconds.

“I raced well in the United States this year with my team. As the season progressed, my time trials improved quite a bit. Even with tired legs, I was able to make it on the podium. I was confident, but to win, you still need to be ready on race day,” said Numainville.

"I'm really happy with the Championships title. It’s certain that road races are very important to me. It was very difficult today, with a strong wind. Yesterday, I told myself that it was a very good course, without too many flat sections. So I arrived at the start line this morning confident."

"I started training in January, and that's it," explained Todd, who has a background in varsity middle distance running.  "I thought I would do well, but I didn't think I would finish second.  But time trials are definitely my strong point."

[Note:  We have interviews with the top-3 finishers, which will be posted shortly.]

The men covered 39 kilometres, with the jog down the side road extended substantially from the women's course.  Adam de Vos (Trek Red Truck was the first to go under 51 minutes, good enough for tenth, but might have been even higher placed without a flat.  But three riders later Cataford was up, and he took the leading time below 50 minutes. 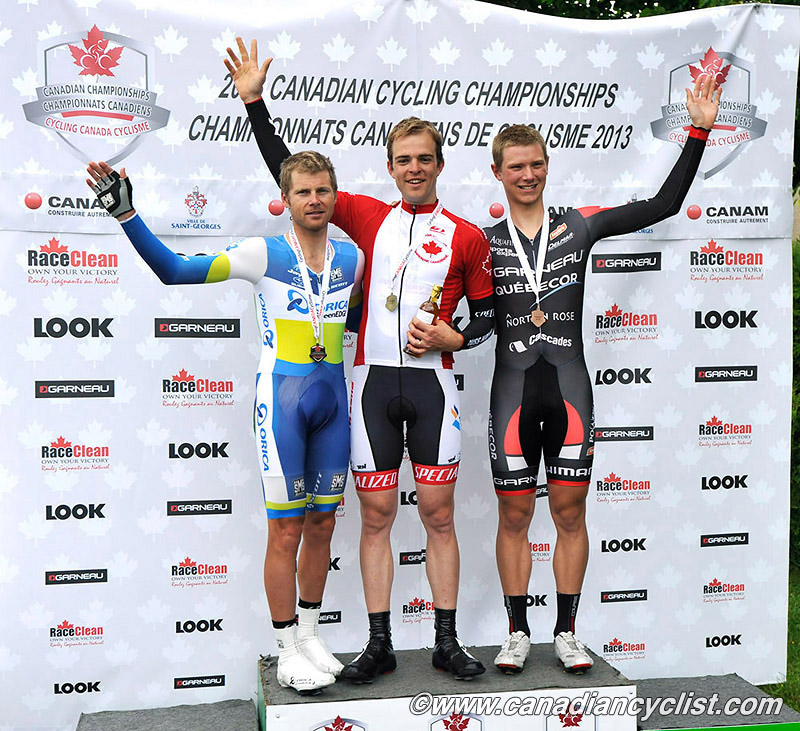 Link to more photo galleries at bottom of page

This was a substantial reduction, and looked like it might hold for a while, until unheralded Curtis Dearden out of Victoria crossed the line an astounding 58 seconds faster.  Dearden was known locally as a good time triallist, but this was an superb ride, and it continued to hold up as some of the big names from Pro Continental and WorldTour teams came in towards the end of the field.

Ryan Roth (Champion Systems) could only manage ninth, 2:12 back.  Zach Bell (Champion Systems) was 1:05 behind, and Hugo Houle (AG2R la Mondiale) finished 1:20 down.  Houle missed a week of hard racing leading up to the championships after he crashed out of the first stage of the Tour de Beauce last week.  All that was left was Svein Tuft's team mate and former second place TT finisher Christian Meier.

Meier was close to Dearden, but between five and ten seconds down at both intermediate splits national team coaches were recording.  He lost a little more ground in the final few kilometres to finish 13 seconds down, giving the 29 year old bike shop employee, and recent father, a national title that no one except maybe himself could have predicted.

“This is by far my career biggest win,” said Dearden, who won the time trial at the recent BC Provincial Championships. “I trained specifically for this race today. It was goal-oriented training. I didn’t have to train for some big 200 kilometre races. It allowed me to focus on one-hour efforts, and I think that gave me the legs.”

"I saw the profile online and I thought it wasn’t too steep, but when I rode, it felt a little steeper. When I started riding the course today I felt really good. I knew I was climbing well, at the pace I needed. It was a good feeling and I was making time. That’s all I can ask for."

"I felt myself slipping in the 'Oh no, look at all these fancy jerseys and big teams' mentality, but every time I just had to tell myself it didn't matter. It's a time trial: how everybody else rides doesn't matter, it's what you do yourself. I just ran my own race. It made for a very stressful half-hour after my race was completed, in the parking lot, waiting for everybody else to complete the course."

[Note:  We have interviews with the top-3 finishers, plus Hugo Houle, which will be posted shortly.]