Joelle Numainville (Optum) went two for two at the Canadian Road National championships on Friday, winning the Elite women's road title to go with the time trial title she had won 24 hours earlier.  Numainville won an uphill sprint after an impressive comeback from a flat suffered less than six kilometres from the finish line.  Her team mate Leah Kirchmann took silver and Lex Albrecht (Now & Novartis for MS) third.  Elisabeth Albert (Rocky Mountain-Lessard Bicycles-Apogee) was the top Under-23 rider, in eighth place.

The 110 kilometre race saw the riders start in St-Georges and ride approximately 32 kilometres to a 15 kilometre circuit, which they covered three times before riding back to the finish.  The race opened with a neutral six kilometre section, after organizers discovered that 300 metres of the course had been covered with fresh, sharp stone gravel only a couple of days earlier. 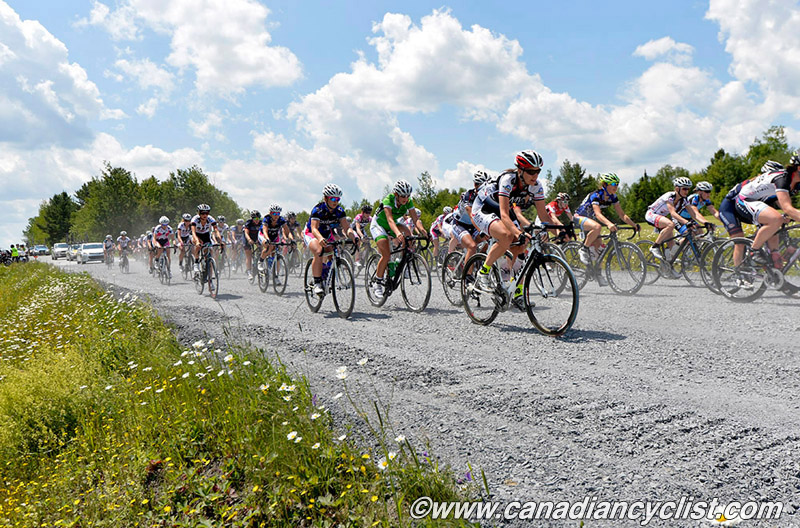 Rolling through the gravel

After a regrouping following the gravel section, the race was restarted.  Catherine Dessureault (Stevens Racing p/b The Cyclery) attacked shortly after the restart, and by the beginning of the lap circuit was nearly a minute up on the peloton with two chasers - Josée Hepell (Iris) and Kristine Brynjolfson (Trek Red Truck) - steadily catching up.  The two chasers joined Dessureault on the first lap, and the trio pulled away to nearly two minutes clear after another lap. 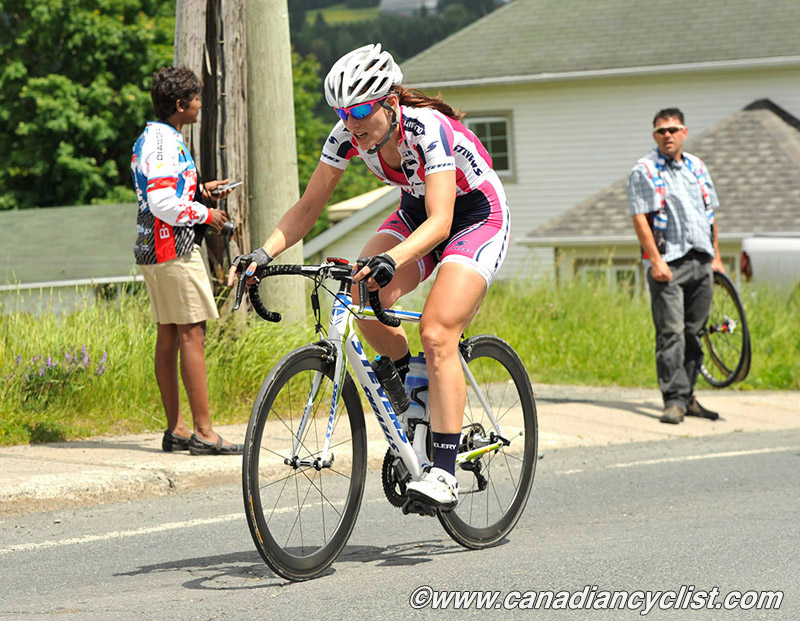 Catherine Dessureault initiated the main break of the day

However, the attacks were beginning back in the peloton and the speed was increasing, especially on the long climb the riders hit at the start of each lap.  Leading the charge up the climb was 2011 national road champion Veronique Fortin (Diadora- Pasta Zara), one of the acknowledged top climbers in the race.  Each lap, her tempo splintered the field on the climb, and less rejoined over the top each time.  Numainville, however, was matching Fortin pedal stroke for pedal stroke.

The three leaders were caught at the top of the climb as the peloton began their final lap, and the pace shattered the field.  Through the final lap before heading back to St-Georges a small group of 20 riders reformed at the front of the race, just in time for earlier break rider Heppell to attack again, and quickly carve out a lead as the favourites watched each other. 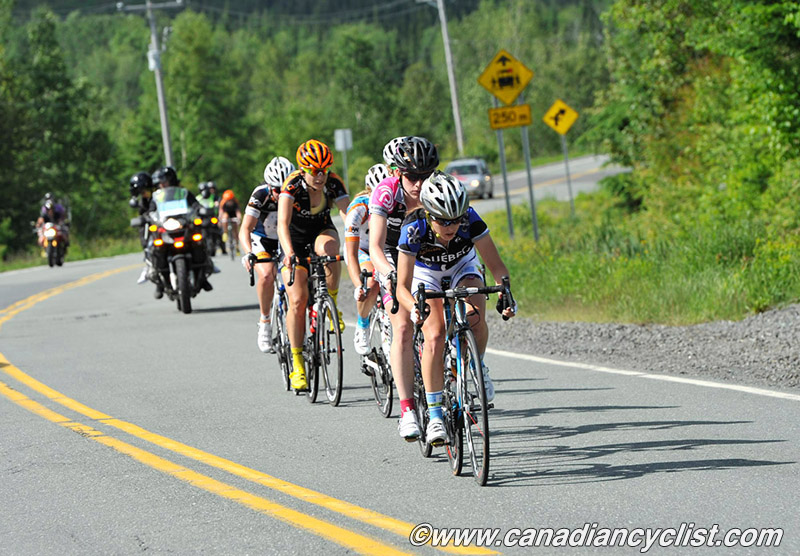 Karol-Ann Canuel leads the break with 20 km to go

Heppell soon had nearly a minute lead, but Fortin and Karol-Ann Canuel (Equipe du Quebec) started attacking on the rolling climbs back to the finish line, and an elite group soon bridged up to Heppell - Numainville, Canuel, Anika Todd (Tripleshot Cycling), Albrecht, Kirchmann and Fortin.  Heppell was dropped soon after on the rolling hills.   However, the group would not work together and were close to being caught by the peloton as they hit the gravel.

Canuel led the group onto the gravel, and then disaster struck for Numainville with a rear puncture.  Neutral support was stationed at both ends of the gravel section, but Numainville could only watch the front of the race roll away from her as mechanics ran to her with a replacement wheel.  The Optum rider put in an impressive effort to rejoin the leaders as they turned the last corner for the final 200 metres uphill to the finish line, launching herself clear of her team mate to take the win. 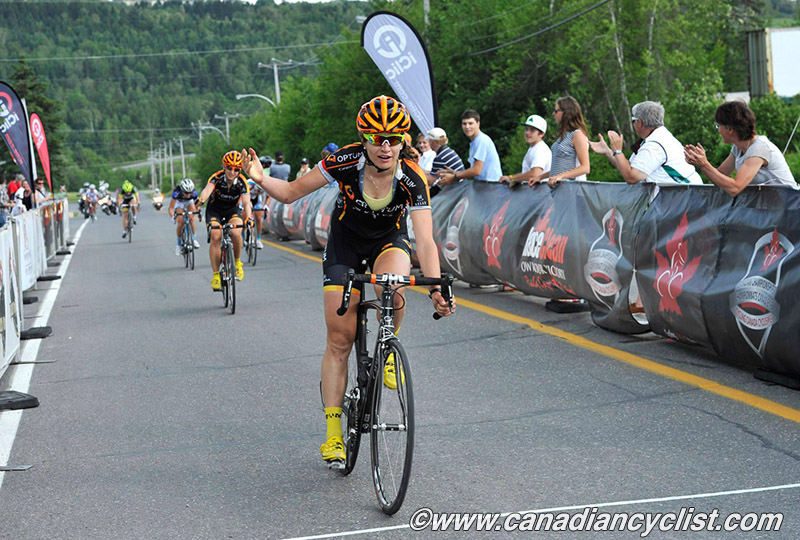 "I thought I was done when I got that flat," agreed Numainville, "but you want to give everything you have on the day and have no regrets, so I got my flat changed and attacked and bridged up to the break.  I actually just caught the break on the last corner, and I attacked again.  So, I'm just really happy.  I wanted to go everything I had and go home having done that."

“I felt really good out there. There are some days when you know your form is excellent. After the 50 kilometre mark, I knew I had it in me to post a good result. I tried not to dispense too much energy, but I also didn’t want anybody to win. I controlled my energy and output levels and made sure to be in the right groups when I had to be there.”

Race Note
Jasmin Glaesser (Team TIBCO) had to get mechanical support on the third lap of the circuit when the battery for her shifting system died.  The mechanic swapped the battery for the one on her TT bike. She admitted after the race that she had not charged the battery in months.