“Tropical hot!” weather has smothered the racers on the opening day of the 2013 BC Bike Race Presented by Harbour Air, BC Ferries and Shimano. With temperatures pushing 28 celcius (90º) and the humidity soaring, race co-founder Dean Payne describes day one of the BCBR as the hottest and most humid on record. “The past two weeks of rain saturated the ground and now the moisture is just rising out of the ground. I’ve never sweated so much in my life.” It’s a stark contrast to the 2012 edition of the race that saw the wettest weather of the the race’s history. From the smiles stuck to the racers faces at the finish line, the sunshine and heat are the preferred conditions for riding the technical singletrack the BCBR is famous for. 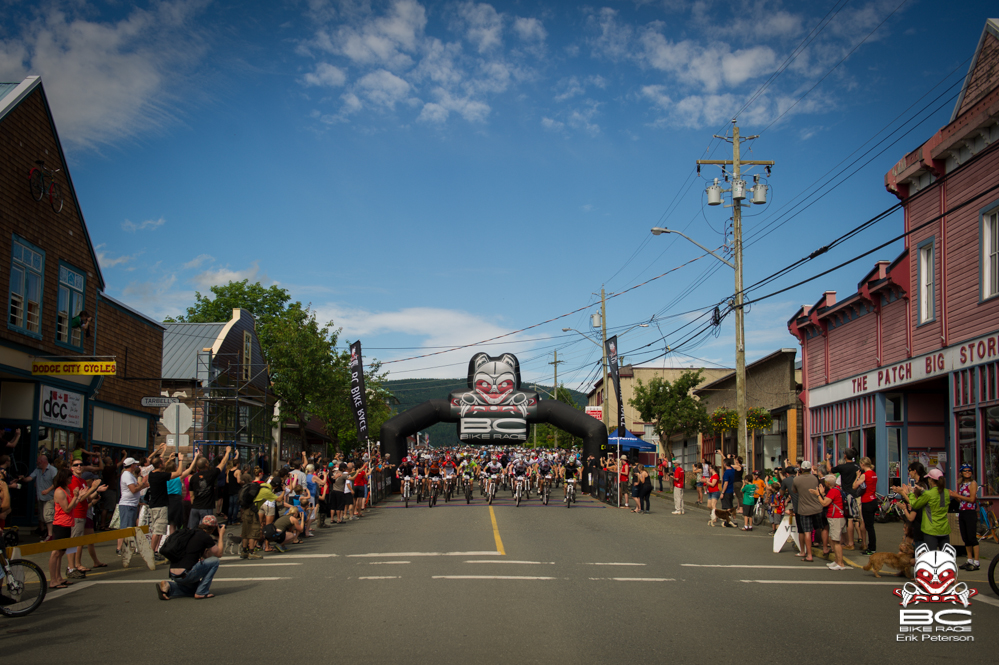 It was a stage for regional riders Kris Snedden (Kona) and Neil Kindree (Specialized/Corsa Cycles) who took first and second after a day of a three man Kona tag-team that worked over last years winner, Kindree. Kona rider Spencer Paxson managed to overcome an early crash to earn a step up onto the third step, but it was Cory Wallace (Kona) who added to the already sweltering heat with an early attack that put Kindree on the defensive. The Kona team tactics probably shouldn’t have been a surprise to last years champion after he played it safe in 2012 and waited till late in the race week to show his true cards. There will be no rest for the foxy strategist this year. 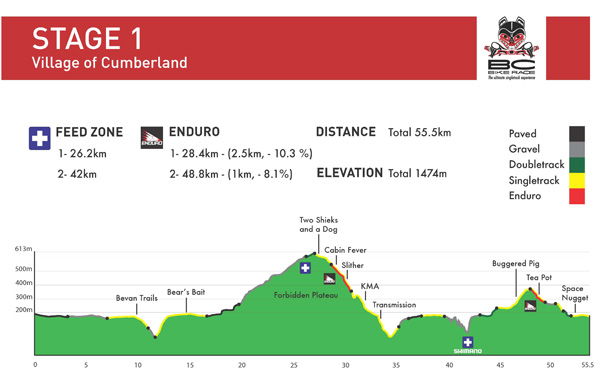 Day one also proved to be full of early fireworks in the Open Women’s race as last years winner Wendy Simms of Kona had no chance to catch a moment in the shade with Kim Hurst (Mud Cycles) of New Zealand hungry for a chance to unseat the Queen of Lean. Hurst had Simms against the ropes on the initial climbs up to the Forbidden Plateau before getting bested in the singletrack. Unfortunately a directional misstep put Hurst back at the finish line 2 minutes coming into the finish line. Simms should take note and prepare herself for the game Hurst is ready to play. “I’m really looking forward to a long hard week of riding.” Apparently Hurst is no stranger to competition and 2013 is her second comeback after being Junior National Champion of Great Britian in 1995, 96 and 97. In 2006 she returned to racing and managed 3rd at Britian’s Elite National Championships before giving up mountain biking again for five years. Third place finisher Trish Grajczyk of Deadgoat Cycling finished another five minutes back to take the third podium spot. 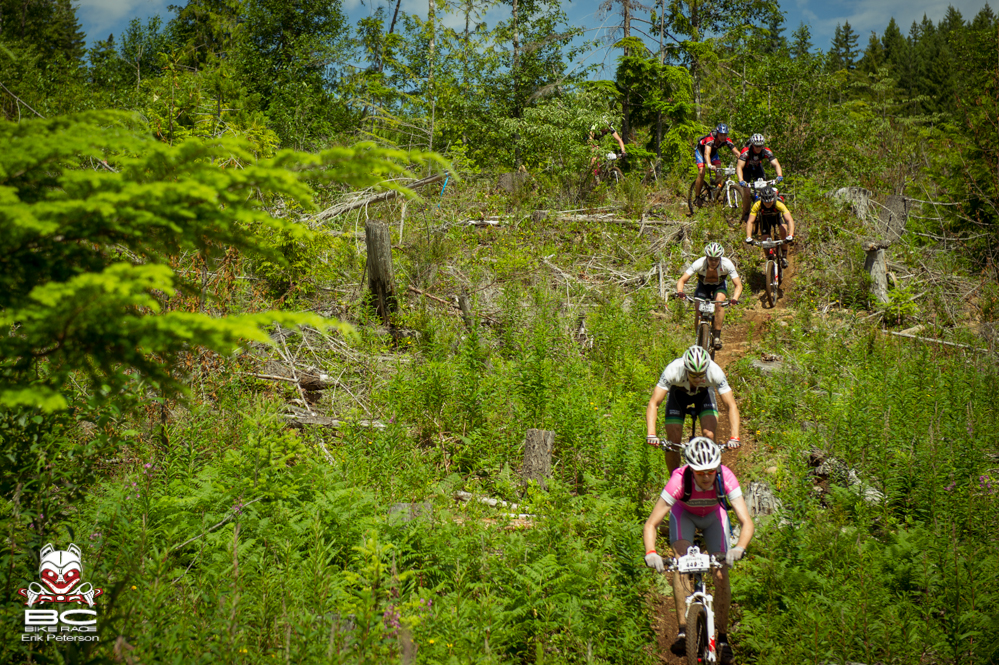 As usual there are a cast of characters searching for the legendary “Ultimate Singletrack Experience”. Mountain Bike Hall of Fame Inductee Joe Murray and his teammate  Robert Woerne took the second spot on the podium in the Team of two 80 Veterans category. Sitting a solid nine minutes above second is the winners of Mafia Racing, Andy Rigel and Jeff Beltramini. Rocky Mountain Rider Wade Simmons and his partner, the winner of Wade’s Excellent Adventure, Carlos Zavarce, finished with Wade sprinting and high fives.

Last year’s Enduro winner Andreas Hestler (Rocky Mountain Bicycles) suffered a flat on stage one and Kris Snedden managed to take the overall on the day despite losing Stage 1 of the Redbull Enduro to Eric Goss (East Infection 2). Goss might have his eye on the Enduro overall since he seemed to use a proven strategy for domination by relaxing a little in between the enduro stages. Day one gives little away but as the week unfolds and riders acclimate to the singletrack riding, anything can happen. The story is in the progress of the days and the many factors each rider has to deal with.

A new feature of the BC BIke Race this year is the addition of a Cheer Zone at special sections of the course. Spectators will be shuttled to watch, cheer, and egg on tired racers and front runners come through the forest. The Cheer Zone also gives an inside look at how other people handle trails they might ride all the time. With music and Brett Tippie at the mic every cheer zone is gonna shatter the silence of the forest and add a boost to legs looking for the finish line. 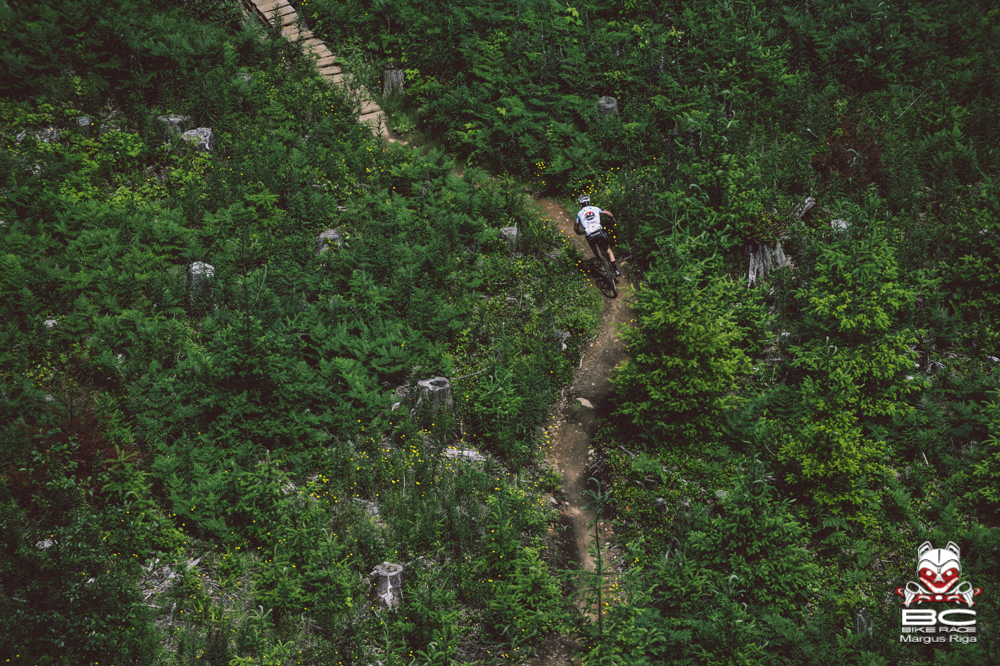 Today’s introduction to the trails of the BC Bike Race might of been hot but it had to be a relief to finally start the journey after the amount of preparation and sacrifices every racer endured to get to the start line. Day Zero had a calming effect on everyone’s nerves after a smooth registration process at the Argyle Secondary School in North Vancouver, located at the base of Mount Fromme, home of the famous North Shore trails. Riders had an opportunity to be distracted from the upcoming race while sitting in the shade with perfect skies watching 120 of the regions young groms racing in the Adera Kids Race. Mountain Bike legend Brett Tippie called the kids race like an auctioneer announcing the Kentucky Derby. Tippie will be with the event for the rest of the week keeping people’s energy high as the days and exhaustion build.

The first of four ferry rides over the Pacific Ocean to Vancouver Island gave riders a feel for the world of water and mountains that British Columbia is famous for. After departing from the BC Ferries boat the final bus ride to the open arms of the town of Cumberland is a welcoming opportunity to rest in a true island town. With a mainstreet short enough to walk in ten minutes and Dodge City Cyles smack in the center of town under the legendary Riding Fool Hostel, Cumberland is truly a rider’s town. If it wasn’t for Cumberland’s distinctive minning history, the fresh local food and good coffee shops of the small downtown could fool someone into thinking they were in a european village.

The BCBR and North Shore experience has to be an eye opener to the 85% of racers who have never touched their tires to the singletrack of the BC Bike Race. As usual countries from around the world are well represented with over 26 different nationalities. Possibly the most amazing coincidence in the history of the BCBR are the 126 riders from Mexico who have stormed the race. Completely without a central organizing force, somehow the bug hit Mexico and groups from Guadalajara, Tabasco, and Mexico city are finding themselves with a lot more native speakers than they expected in a country far away. A full 20% of the race is Spanish speaking this year but the laughter rising from these groups is a universal sound and they are bringing a great vibe to the 2013 edition.

Despite the heat and the journey ahead racers have full support to help them cross the finish line in Whistler on the final day. An addition to this years event to help racers make the finish line is Yoga with Ryan Leech. Every afternoon he will be holding a cycling specific session and as evidenced by the 240 participants who showed up to be lead by the trials riding legend on Day One, it’s a welcome inclusion.

Stay tuned for day two which moves early in the morning to Campbell River for more singletrack with less climbing. The heat is expected to continue to rise and riders will need to stay within their limits to keep themselves flowing through the trails. The adventure has just started and how it plays out won’t really come into focus until midweek when the racers training and stamina starts to shine through. Welcome to the adventure that is the BC Bike Race.