Orica-GreenEDGE has credited Canada's Svein Tuft as one of the key members of the squad for its win in the Team Time Trial (Stage 4) of the Tour de France:

On the heels of his historic victory yesterday in Corsica, Simon Gerrans stood on the Tour de France podium again today. Today, he was joined by his entire team. ORICA-GreenEDGE won the stage four team time trial in Nice. The team effort put Gerrans in the yellow jersey, tied on time with Daryl Impey and Michael Albasini.

"It was a team effort yesterday, but I was the one to stand on the podium and receive the reward," said Gerrans. "It was that much more special to stand on the stage today with the entire team. All nine of us were on the podium together to celebrate our win. The yellow jersey is an added bonus."

"The creation of this team was a major milestone," Sport Director Matt White added. "We poured a lot of work into the team over the last 10-15 years. To unite so many Australians on a team with Australian DNA was the first step. Our success last year was a boxed ticked. Winning in Corsica yesterday was another big moment. To win today and put an Australian in yellow is a real dream come true."

Omega Pharma-Quick-Step set the early benchmark of 25:57 over the 25 kilometre pan-flat parcours. Third at the intermediate check point, ORICA-GreenEDGE edged out the Belgian squad by less than a second at the finish.

"I thought we'd be around the mark, but the boys had an incredible ride," said White. "We really didn't do much specific preparation for this stage. We did one day on the TTT bikes in Corsica, but that was it. We had moved away from having a team just for the team time trial because we didn't think our best team could beat Sky or Garmin on this particular course. We brought a more diverse Tour team instead. They were very relaxed today, and they nailed it from the start. We were all very happily surprised with the win.

"Time trial specialists Cameron Meyer and Svein Tuft led the Australian outfit down the start ramp. The Tour de France debutants each took long, steady pulls to get the team up to speed. Stopping the clock at 25:56, ORICA-GreenEDGE averaged 57.8 kph to record the fastest time ever for a Tour team time trial. 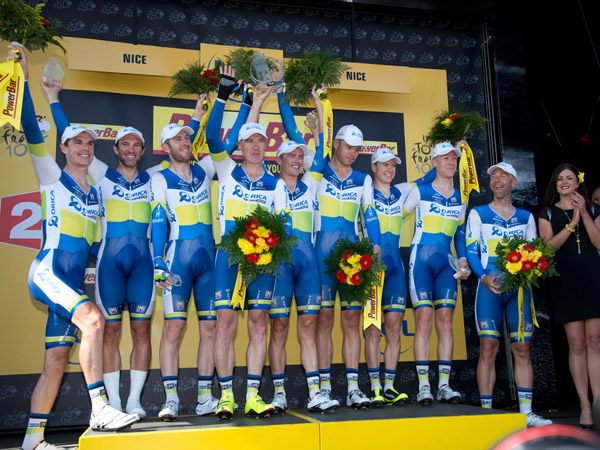 "The boys did a technically good ride today," said White. "Everyone was on the mark. I'm especially proud of Svein and Stuey [Stuart O'Grady] who both took big, long turns on the front. We would have been happy with a top five today. It was really incredible to cross the line and hear we posted the fastest time."

"We certainly weren't the favourites, but we had a very strong team," Gerrans added. "There were no weak links today. Everyone was given a specific role to play within the TTT. The stronger riders pulled harder and longer. The less strong guys kept the speed up on their teams. Everyone committed 100% and it paid off with the win."

With the win came the yellow jersey. Although tied on time with Impey and Albasini, Gerrans was the first of his teammates across the finish line, snagging himself the coveted maillot jaune. The sixth Australian to wear yellow, Gerrans adds his name to an impressive list that includes Phil Anderson, Bradley McGee, O'Grady, Robbie McEwen and Cadel Evans.

"To take the yellow jersey is the pinnacle of cycling," said Gerrans. "The Tour de France is the race around the world that everyone knows, and the yellow jersey is the symbol of that race. Winning stages and wearing yellow changes a career. To pull on this jersey is something a rider might dream about for his whole life. Only a few guys get that opportunity. I'm thrilled to have that honour."

"We want to keep the yellow jersey as long as possible," White confirmed. "We have a one second advantage. Simon only has to stay in contact with the bunch during the next two stages."

The team has a duel focus tomorrow. Gerrans will be one of two protected riders on stage five.

"Tomorrow we go back to targeting a result for Gossy [Matt Goss]," White added. "We'll look after Simon at the same time. Other teams will want to keep the race together for a bunch sprint, so we'll have help there. Ideally, we can take the yellow jersey all the way to the Pyrenees but we're taking it one day at a time."