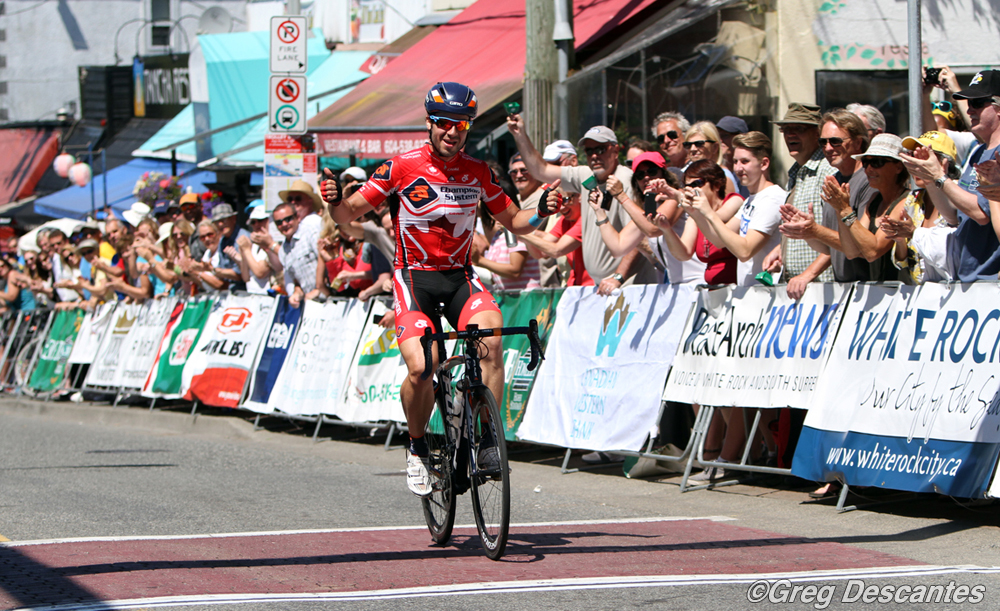 "Guys were trying to stretch the group and snap the elastic right from beginning and I just tried to float a bit. Once we got twelve guys away, I put in a soft one on the flats to keep the group moving and they let me roll. I got up to Jesse Reams and we rolled for about a lap, but the second time up the hill, he didn't have much left and I tried to wait for him,” Bell explained. “I just tried to keep the pressure on, stay at a steady tempo until it was two to go and then just jammed it. I kept hearing that the group was getting smaller and smaller and when you're away, that's nothing but good news."

After doing 11 laps around a longer 10.1-kilometre circuit that includes a brutally steep climb, Bell began dropping riders even more so after the men moved into the shorter 3.8-kilometre course for the final six laps, including one big climb.

As the lone member of the Champion Systems team on the course, Bell, who is the 2013 Canadian Elite Men’s National Road Race champion, thought the Peace Arch News Road Race levelled the playing field.

"I wanted to win something this week and it's pretty tough with the teams and this Road Race is a course that can negate the teams," Bell continued. "I kind of had my eye on it and I've been climbing reasonably well this year."

The 30-year-old, Watson Lake, Yukon-raised Bell was especially pleased to check the event off his bucket list.

"It's my first win in the National Champs jersey, so it's a nice thing to do, and especially to do it in one of my home races and a race I've never won before."

When asked why he enjoyed a course that seemed so difficult and demanding - only 11 of the original 76 riders crossed the finish line - Bell didn’t pull any punches.

"I like to suffer and this is a good course to suffer on. Guys who don't like to suffer don't do well here," laughed Bell. "With the level of field here it suits me. With a deeper field of better climbers, I might not do so well, but I've been doing well on the hilly, classic-type courses in Europe and Asia, so this is right up my alley."

For Knauer, BC Superweek this year ended with six straight appearances in the top three. The Lisberg, Germany product was second in Saturday’s Choices Markets criterium, second in Friday’s Hill Climb, he won the Giro di Burnaby on Thursday and finished third in Wednesday’s Gastown Grand Prix and Tuesday’s UBC Grand Prix.

Women’s Race
With Team NOW and Novartis for MS on the podium twelve times prior to the Peace Arch News Road Race, there was a good chance that one of its eight riders would be on the podium once again Sunday afternoon. And after the eight lap, 80 kilometre race was done, it was a NOW rider on top, but one who hadn’t previously been on the podium during BC Superweek this year. 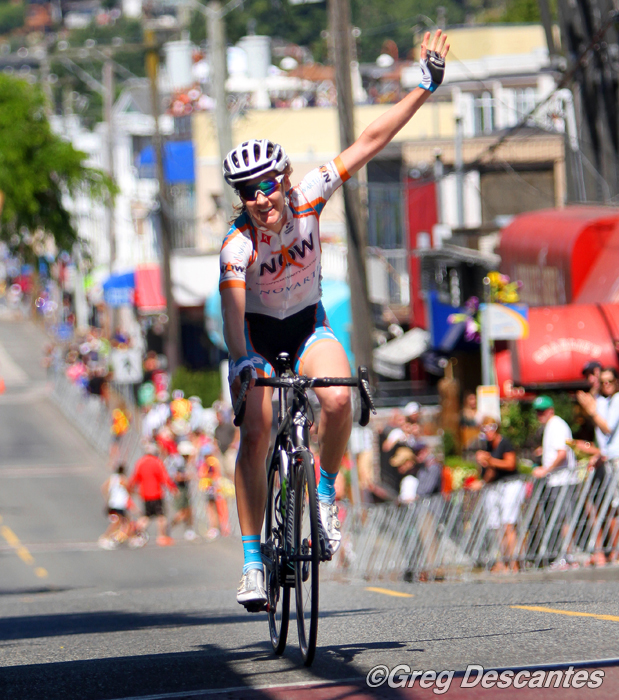 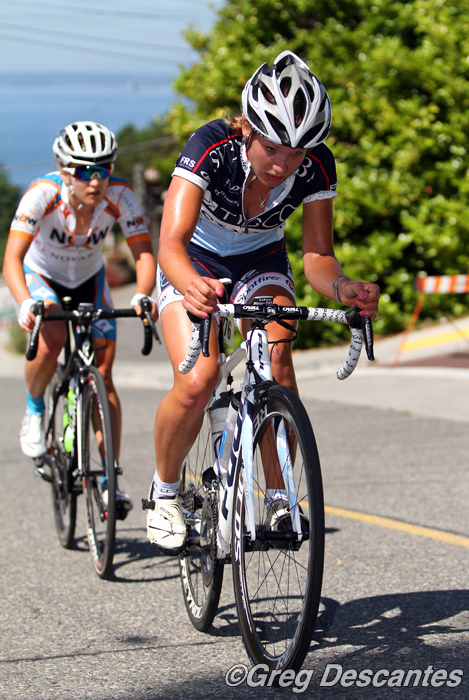 “We let other girls set the pace for the first half of the race and with three laps to go we started attacking,” Donovan said. “Then it dwindled down to four of us and we were trying to attack to get Jasmin off the wheels.”

Donovan was quick to give credit to Glaesser.

“She’s really strong, she was setting the pace on the climbs, so she’s a really good climber,” Donovan added. “She’s a good sprinter too, but we wanted to keep Lex and Olivia in the overall omnium GC.”

Despite the difficulty of the course, Donovan actually relished it.

“I really liked it, it was hard. We were either going up or down,” continued Donovan. “Every lap, I noticed the pack dwindle down.”

After sweeping the podium in Friday’s Homelife Realty Hill Climb and Saturday’s Choices Markets Criterium, Glaesser was very aware of the threat that the ladies from NOW and Novartis for MS represented.

“Going into the race, when NOW had eight riders on the start line, it was going to be tricky no matter what. My plan was to make it a really hard race and go for broke and see what happens,” Glaesser said. “At the end I was in a really tricky situation with four NOW riders and myself - it’s not a good place to be in - so eventually I had to make a decision knowing the win was unlikely. I had to let one of the riders go and try to fight it out for second or third place. I think at the end of the day after seeing how the odds stacked up at the start, I’m happy with third place.”

Glaesser, who was born in Germany, but lives in Coquitlam, feels that for the next event, things will be a little more even.

“Later this week when I’m down in Bend, Oregon for the Cascade Cycling Classic, I’ll have my teammates with me and we’ll see how things work out then,” smiled Glaesser. “But the NOW team did a great job throughout BC Superweek and for them to come out is great in building the women’s field.”

One of four BC Superweek ambassadors, Albrecht had finished no worse than first on the podium during this year’s series after winning the MK Delta Lands criterium ten days ago and this past Friday’s Hill Climb, but she was second on this day. Not that it bothered Albrecht though, she was happy to see one of her teammates on top.

“Cycling is a team sport and a lot of people don’t understand that, especially because we have individual results at the end of the race with our own names beside them, but our goal is to have one girl on the top step of the podium and when we have the opportunity, we’re going to try and paint the podium with the blue and orange of NOW and Novartis for MS as much as possible.”

Despite not racing in BC Superweek before, it was obvious that the event had already carved out a special place in Albrecht’s heart, especially being on the podium in her home country.

“It’s definitely extra special. I love racing with my team here in Canada, we usually race in the United States so it’s a excellent opportunity to race at home and share what Canada's all about with my teammates," a visibly proud Albrecht said. "They've all been really impressed with not only the beauty of the Lower Mainland of BC, but also the hospitality of the people and this was generally just a great experience overall for everybody."

Omniums or Overall Titles
Albrecht's second place finish along with a win in Friday’s Hill Climb gave her the Tour de White Rock omnium, or overall, title ahead of teammate Dillon, who was fourth on Sunday.