This year, Canadian cycling fans will, unfortunately, miss out on what was expected to be an exciting battle for the Elite women's Cross-country National title between four-time defending champion Catharine Pendrel (Luna) and rival Emily Batty (Trek Factory Racing). Pendrel recently crashed in training, breaking her collarbone, putting her out of action for at least a month.

We spoke with Catharine from her home in Kamloops, BC. 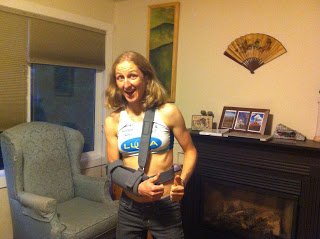 Canadian Cyclist: So, what happened?

Catharine Pendrel: Well, I took my husband away for his birthday weekend, to do some riding on the Sunshine Coast. We had just finished up a great ride, and we decided to go back for some drop practice, because there were some great drops around there. So, of course, I went 'I'll go first', and I didn't adequately scope out the jump and it was a bit bigger, with a shorter landing then I thought. I landed head first and rolled onto my shoulder, luckily, to take the brunt of it. I ended up breaking my clavicle at the distal end, near the shoulder.

CC: Sometimes this injury is a crack, and sometimes a complete fracture; how severe is yours?

CP: It is complete break. The thing is, that happening at the distal end it kind of features [involves] two ligaments, so the bone is having trouble finding union, meaning the [two ends of] the bone aren't together yet. That being said, I'm starting to feel really good. Yesterday [July 13th] I tried to ride out of the saddle a bit [on the road bike], and I could. Every day I have more strength, I have more mobility, and it's been really not painful, so yesterday I felt really good on my bike and I thought 'Oh, maybe I could race!' But then at the same time, I know the bone's not really fused together, and I really want to give my shoulder the most time to strength, so I can get myself out of trouble on a mountain bike.

CC: So there's no thought of surgery, and putting a plate in or anything like that?

CP: There was discussion about that for sure. But, I'm choosing to strengthen my shoulder at this point and see how that goes. Basically, surgery would have had me off my bike until the week before Worlds, and because I've had so little pain, and [am] feeling more strength and mobility, I didn't want to take the risk of surgery now. Surgery for this is a two part procedure, where they have to go in and put in the screws and a clip, and a month later go in and remove it. It's the kind of thing [injury], where there are months before it is declared non-union, so I could go back this fall or at any point if it was bothering me and do the surgery then.

CC: Obviously, it's still early days; when did it actually happen?

CP: It happened June 23rd. When I first did it, it was my back that was giving me way more trouble. Getting out of bed was difficult for two weeks, but it's getting better every day now. I'm at three weeks today [July 14th], so I'm well into recovery, but it needs more time for the bone to recover and the shoulder to be able to support it.

CC: Clearly, Nationals are out, but when do you hope to be able to start racing again?

CP: I hope to be racing Mont Ste Anne, and there's a US Cup the weekend before in Vermont that I want to do. So I have a plane ticket East and I'm hoping that works out. The way I'm feeling now, I feel I'm going to progress to that point, so I'm going to try and get on the mountain bike sometime next week. I know I can ride trails, but they [doctors] want me to just wait a bit before I'm doing everything; you know: pulling up on the handlebars with a lot of force, or absorb a landing.

CC: This is new territory for you - you've never had a major injury like this before. So what's it been like with that?

CP: Yeah, I guess it was my time! Everyone has to deal with setbacks, and I'm looking at it as it's better to have it in the first year of a [Olympic] quadrennial, and take away the other things you can take from it, and move on from there.

CC: It's going to be unfortunate for the fans, because we were looking for a big battle between you and Emily at the Nationals.

CP: I know! I was too. It would have been really good fun racing. I know for myself in 2010, when Marie-Hélène [Premont] wasn't able to race Nationals because of bronchitis, I was so upset because I had been really anticipating a great race that was going to push me to my best.

So I'm sure that for Emily it's a letdown too; not having me there. Because she's got the form that she could win even if I was at 100%. So I'm sure it's disappointing for her too, but at the same time, at that race in 2009, where I didn't have Marie to push me, it was still one of the best races I ever did, because I was motivated to have a perfect race. So I think even if the best people aren't there, I think you can really push yourself to put out a good performance. I'm sure the girls are going to have a good weekend, and I'm going to wish I was there...

CC: So I guess for you it is a matter of staying at home, training and recovering as best as you can.

CP: Yeah. I'm going to head out East on the 26th [to her parents in New Brunswick], and then drive to Vermont from my parent's place. I think the time at home is actually going to go pretty quickly. I'm doing lots of stuff like therapy for my shoulder and strengthening exercises. I think tight hips were the source of some of my back issues, so trying to get that resolved, and just trying to be strong as a whole athlete, and get nice and confident on my mountain bike before I get into racing.

It is easy for athletes to want to get right back to competition, especially Nationals and World Cups. I am definitely struggling with that as my legs feel strong...and I have definitely scoped out last minute flights in case I got on the MTB and felt "good enough". I am really happy with how recovery has come this last week, but also cognizant of what is still missing in upper body strength.

Being mid-season and with two World Cups and Worlds left for me I know, looking at the bigger picture, it is essential for me to rebuild my shoulder and back strength and health before leaping in prematurely and re-injuring myself. The next few weeks will be dedicated to regaining strength and mobility as well as catching up on the training delayed by being injured.

Looking forward to rejoining everyone on the circuit.