"Yes, it was a bit of a surprise," the young cyclist admitted after the ceremonies. Doyle is known as a strong sprinter, but his team had never yet won at the Mardis this season. 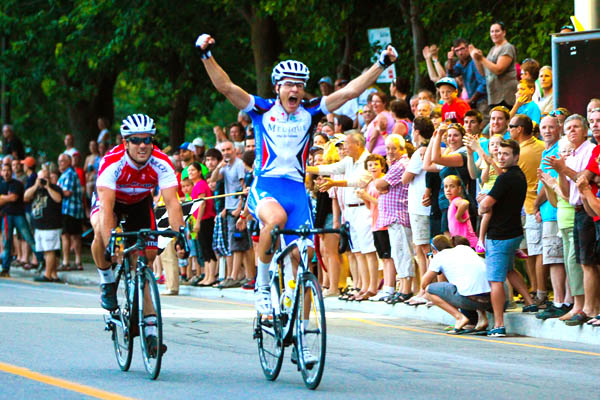 The third spot went to Stephen Keeping (Steven's Racing) this evening. There were 80 cyclists on the start line in a race apparently marked by three crashes and at least 10 cyclists went down, Lambert-Lemay among them.

Lambert-Lemay, despite his fall, bounced back and now sits in close second in cumulative points (808) behind his team mate, Pierrick Naud, who leads the series at 830 with only two more races to go this season. Keeping now sits in third place in cumulative points with 630. On the podium, former Canadiens player Yvon Lambert stood beside Lambert-Lemay.

The next race is Tuesday, July 30, around LaSalle Park in the Montreal borough of Lachine. The first race starts at 5:30 p.m. and the men's pro-elite race is at 7 p.m. It is free to watch the bike races.