The birth of a champion in Catalunya 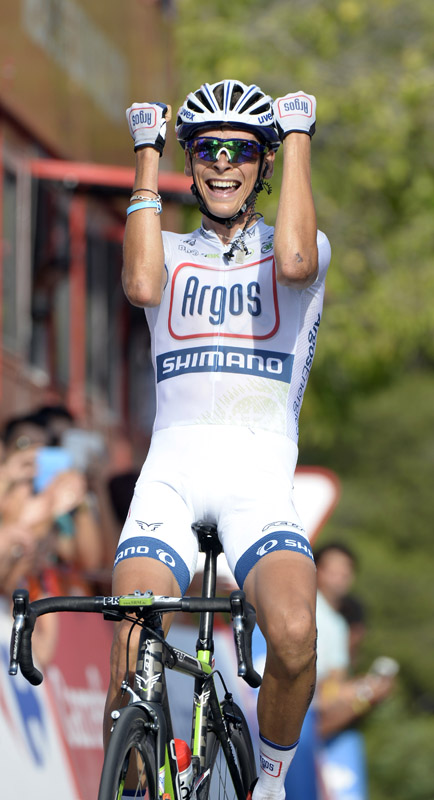 Young climber Warren Barguil of Argos-Shimano, the second youngest rider of the Vuelta after his team-mate Nikias Arndt, soloed to victory at Castelldefels. The 21-year-old escaped from a front group comprising very experienced riders like Michele Scarponi and Rinaldo Nocentini to demonstrate his enormous talent. Only a year ago Barguil won the Tour de l'Avenir.

A champion was born at the Vuelta, but the event lost a few riders before and during stage 13: Sebastian Lander (BMC) and Vicente Reynes (Lotto-Belisol) didn't take the start. A crash at km 10 forced Pablo Lastras (Movistar) and Laurens Ten Dam (Belkin) to call it quits. Troubled since Monday by a knee lesion, Catalan rider David De La Cruz (NetApp-Endura) also pulled out, as did Frenchman Laurent Mangel (FDJ.fr) later on.

Orica-GreenEDGE pulled the bunch and reduced the deficit to less than two minutes before the first category climb of Alto del Rat Penat that included 22% steep sections. Scarponi was alone in the lead when Gianpaolo Caruso and Joaquim Rodriguez (Katusha) split the bunch into pieces. Around fourty riders, including all the favorites, gathered at the top of the climb (km 119) 1:40 behind Scarponi whose presence at the front motivated race leader Nibali to get his team-mates chasing.

With 45 km to go, Scarponi was rejoined by Intxausti, Nocentini, Barguil, Mollema, Santaromita, Txurruka, Coppel, Martinez and Zandio, followed by the bunch two minutes behind. Surprisingly, the gap increased to three minutes at km 37 until the FDJ.fr team moved to the front of the peloton, but it was too late. Intxausti crashed in a tunnel, rulling out his chance for a victory. Coppel and Martinez tried their luck eight kilometres before the finish but were reeled in three kilometres further, first by Scarponi, second by the rest of the group.

Just before the 1-km to go banner, Barguil took a chance, attacked and claimed a brilliant solo victory . Race leader Nibali came safely home, 2:43 behind the young super talent from Argos-Shimano and will wear the red jersey again in stage 14, the first of three Pyrenean stages, from Baga to Andorra/Col de la Gallina (155.7 km).


Results from the thirteenth stage in Spain