The final round of the Eliminator series at the Mountain Bike World Cup in Hafjell, Norway, offered some of the most exciting racing of the season, with multiple lead changes in almost every race.  While neither of the World Cup leaders won their respective final, each won the overall title, with Alexandra Engen (Ghost Factory) taking the women's title and Daniel Federspiel (Otztal Scott) the men's.

The tough circuit started with a steep climb before traversing the ski slopes and then taking the riders through a series of BMX jumps.  From here they dropped into a rock garden, went up another short and steep climb, and then dropped down to the final finishing straight.

Women
Engen was joined in the women's final by her closest rival Kathrin Stirnemann (Sabine Spitz Haibike), who was only ten points behind Engen.  A win by Stirnemann would vault her into the lead and the title.  Also joining the two series leaders in the final were Jenny Rissveds (Swedish National) and Eva Lechner (Colnago Sudtirol).

Rissveds, the winner of round two at Nove Mesto, Czech Republic, took an early lead and did not relinquish it.  Engen was battling to stay in front of Stirnemann until her rival ran out of power on the climb, and from that point just cruised in, to finish third behind Lechner. 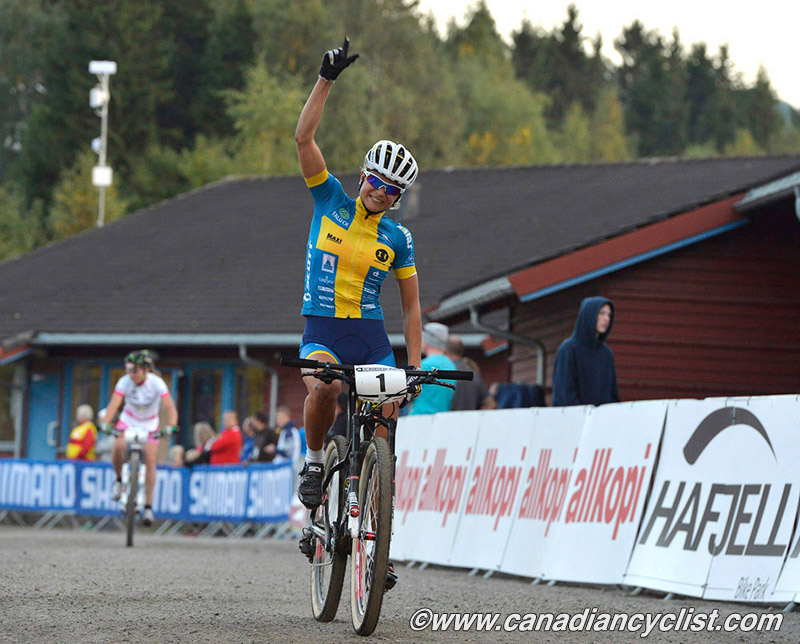 Rissveds was overjoyed with her second win of the season, "It was really, really tough. It was a crazy course with an incredible uphill at the beginning. and then the jumps, after the jumps it was crazy. I was so tired, it felt like I had bad legs from the beginning. It was crazy. It is incredible (to win), amazing. After I messed up the World Championships, it feels really good."

Engen decided to play it a little cautious after almost crashing out in the first round.  "It's so crazy. If you would have asked me after the first heat, I was like 'I don't know if I want to go hard today'. I messed up in a jump and lose a tooth.  But I have been training too hard all season to give up on the finish line, so it's just not me. But I felt like the hardest part was the semi-final. It was crazy."

"And in the final I decided to be before Kathrin (Stirnemann) because I really wanted to have the World (Cup) win.  When she disappeared I was so shocked, I had expected a fight on the finish line.  When she was not there I was 'what do I do now?'  I just rode safely down so I wouldn't mess up."

Canada's Cindy Montambault (CVM 2 VALS) qualified and advanced to the 1/4 finals before being eliminated.

Engen took the overall title with 220 points, followed by Stirnemann at 205 points and Rissveds with 170.


Men
The men's race for the overall title was over after Federspiel made it through the first round, assuring himself of at least the single point he needed to clinch the title.  He did not stop at that point, making his way into the final, along with top rival Simon Gegenheimer of Germany, Mathias Wengelin (Swedish National) and Andres Soto (Wild Wolf Trek).

Federspiel did not contest the final, content to take a victory lap to celebrate his title.  At the front, Gegenheimer and Wengelin battled all lap for the race win, with the German champion finally taking the victory. 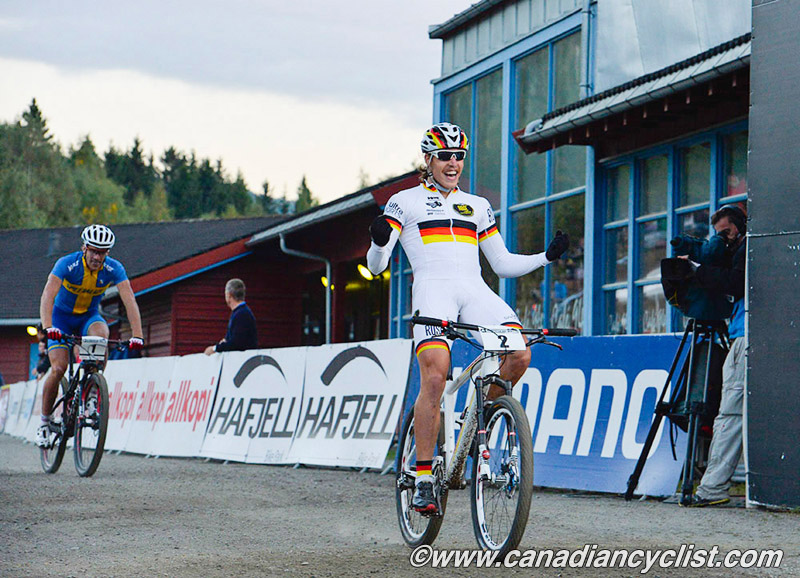 "I am so happy," commented Gegenheimer. "I have been waiting so long for the first victory.  After the Worlds I was a bit disappointed with my result and now I am super happy. It is a great final to the season. It was the toughest race of the year. The first uphill you had to do a lot of technical and then the second uphill it was really tough. The World Cup (overall) was close, but I lost it in the first half of the season."

"Yes, it is very special, it was one of my big goals this season. This was a good race from the qualification to the final.  In the final I have much respect, because in the (semi) final it was so fast to the finish and with Kenta (Gallagher) it was nearly a crash.  But now I finish in fourth place and I am super happy. I had fun."

Federspiel won the overall series with 183 points, followed by Gegenheimer with 159 and Fabrice Mels (Salcano Alanya) with 106.