Building on the success Sponsor Connected and Live to Play Sports had supporting Craig Richey last season, the program is being expanded for the 2013/2014 cyclocross season with a three rider roster and increased sponsor support.

Craig Richey is returning to the team after a successful 2012/2013 season culminating in a 34th place finish at the 2013 UCI Cyclocross Elite World Championships in Louisville.

New additions to the team include Tom Skinner and Adam de Vos. Tom is a veteran of West Coast cyclocross with a long standing relationship with Norco Bicycles and Oak Bay Bikes. He has countless cyclocross podiums and finished second overall in the Cross on the Rock cyclocross series last year, and is looking to go one step better in 2013.

Adam is coming off an impressive road season that included numerous trips to Europe with the Canadian U23 National Road Team and will be looking to translate that power into winning speed on the cross bike. Tom and Adam will be racing out of Victoria with a focus on the Cross on the Rock series as well as BC Superprestige races. Craig is based in Boston while attending grad school and will be racing the NEPCX and MAC series UCI races, and the whole team will come together for Canadian Nationals in Vancouver late November.

SponsorConnected.com is a free online service that connects athletes that are looking for sponsorship with businesses that would like to use sport sponsorship to advertise and promote their business.

VOmax is a New England based custom clothing company with all clothing being made on location in Northampton.

Norco Bicycles is a Canadian cycling brand and the team will be racing on the full carbon disc brake equipped Norco Thresholds equipped with hand-built Zed Wheels. Nutritional products provided by Hammer Nutrition and shop support by Oak Bay Bikes. 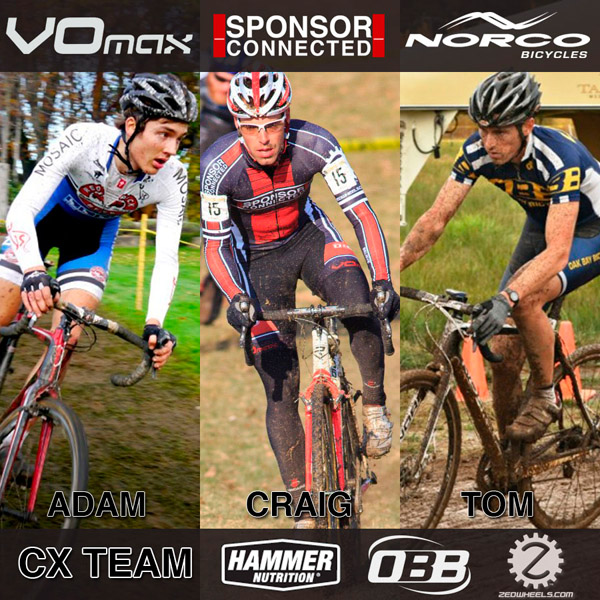