Following a training camp in Girona, Spain, ORICA-GreenEDGE has selected its six man line-up for the team time trial at the Road World Championships in Florence, Italy on Sunday. Three of the six men were part of the Australian outfit's Tour de France winning ride in Nice last July. 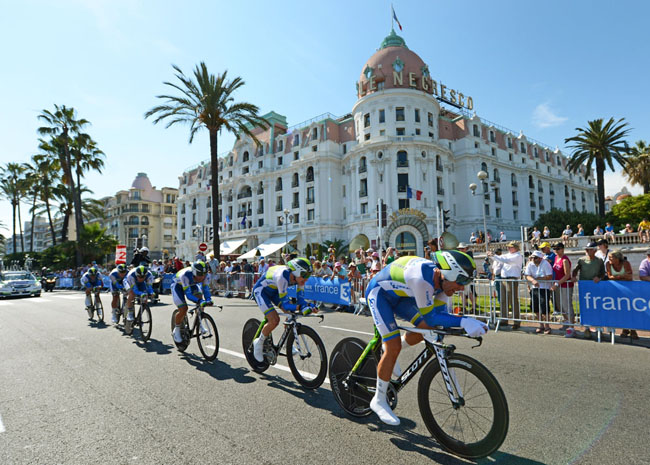 "The majority of our team hasn't raced during the last three weeks in preparation for the Worlds," said Sport Director Matt White. "Sam and Heppy were the two exceptions. Heppy raced Poitou Charentes and Alberta, and Sam did the first two weeks of the Vuelta."

"Sam was sick after the Vuelta," White added. "We had to assess how Heppy handled the race load and travel and how Sam recovered from his illness. In the end, we decided to go with Heppy as Sam isn't quite at 100% yet."

Both Hepburn and Bewley participated in the team time trial training camp in Girona. All seven riders in the running for selection live in Girona, so the team was afforded the opportunity to spend time at home while training specifically for the late season goal.

"We've had the team training together for nearly two weeks," explained White. "That's the beauty of their set-up. All of the guys live in Girona, and they've been able to train together daily without going somewhere specifically for camp. They've built-up to this the Worlds together."

The team time trial course in Florence is a more traditional course than the one used in Limburg last year. Lacking in bumps and lumps, the Italian circuit favours the riders selected by ORICA-GreenEDGE.

"The course last year was a lot tougher than most people would have predicted," recalled White. "It was quite undulating and very solid with the Cauberg coming under 1 kilometre from the finish. The course in Florence is much flatter and faster. In 57 kilometres, there should only be 4:30 of climbing."

We have some big boys on our team," White continued. "For us, the less climbing, the better. This is going to be a fast circuit, and it suits our characteristics much more than last year."

While White knows competition is fierce, he believes the team is well-poised for a second medal in the collective chrono. He considers finishing inside the top three well within reach and a win a possibility should all things go right on race day.

"Our objective in Florence is the same as it was in Limburg last year," said White. "Championships are about medals, and we're here to medal. If everything comes together on Sunday, we're going to be a highly competitive outfit."

"Omega Pharma-Quick-Step is the favourite with the roster they put together," continued White. "I expect BMC, Garmin and RadioShack to be in the mix as well. It's going to be a very competitive race on this course. I say we're here to medal, but we have a chance of winning the world title, too."