The first day of road races at the 2013 Road Worlds in Florence, Italy, saw two world titles awarded.  Amalie Dideriksen (Denmark) took the Junior women's gold medal, while Matej Mohoric (Slovenia) won the Under-23 men's world title.  The top Canadian finisher for the women was Tessa Pinckston in 49th, with Canadian's only entry in the Under-23 race, Antoine Duchesne, finishing 46th.

The Junior women are the only category to start and finish on the 16.6 kilometre circuit, with the rest starting starting to the west of Florence and riding into the circuit.  The circuit starts with a long steady climb of about four kilometres to Fiesole, before a fast and narrow descent.  The riders then face a short and very steep 16% climb of 600 metres, followed by another long descent back into Florence.  There is another short 10% uphill before the final three kilometres through the streets of Florence to the long finishing straight. 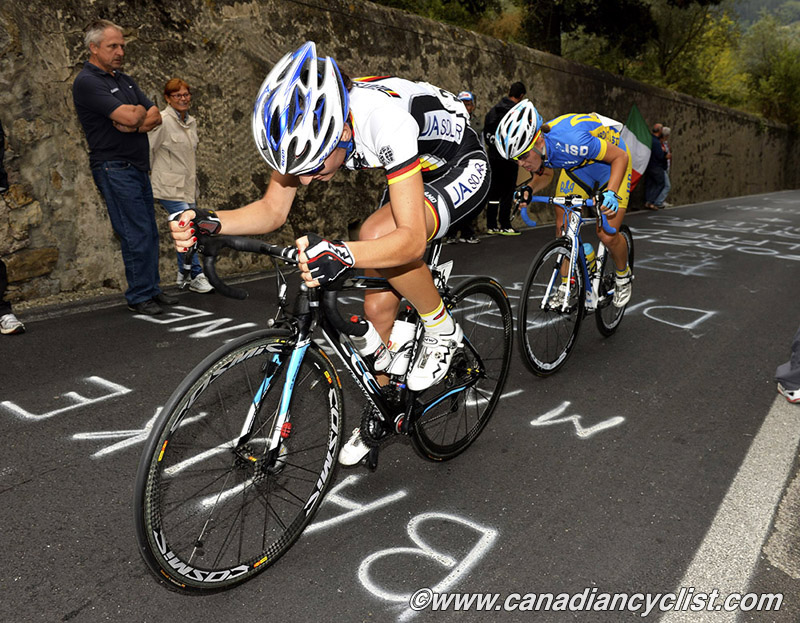 The women's race blew apart on the first climb, with two riders initially breaking away - Anna Knauer (Germany) and Olena Demydova (Ukraine).  They were eventually joined by Dideriksen, Anastasiia Iakovenko (Russia) and Jessenia Meneses (Colombia).  Knauer was dropped and the other four stayed clear for the remainder of the race.  Iakovenko and Demydova were clearly the strongest on the climbs, with the other two dropped repeatedly and chasing back on the descents.

Meneses was dropped for good on the final lap, and Iakovenko and Demydova were unable to shake Dideriksen.  In the final 150 metres, the Danish rider easily came around the Russian to take the title, with Demydova getting bronze. 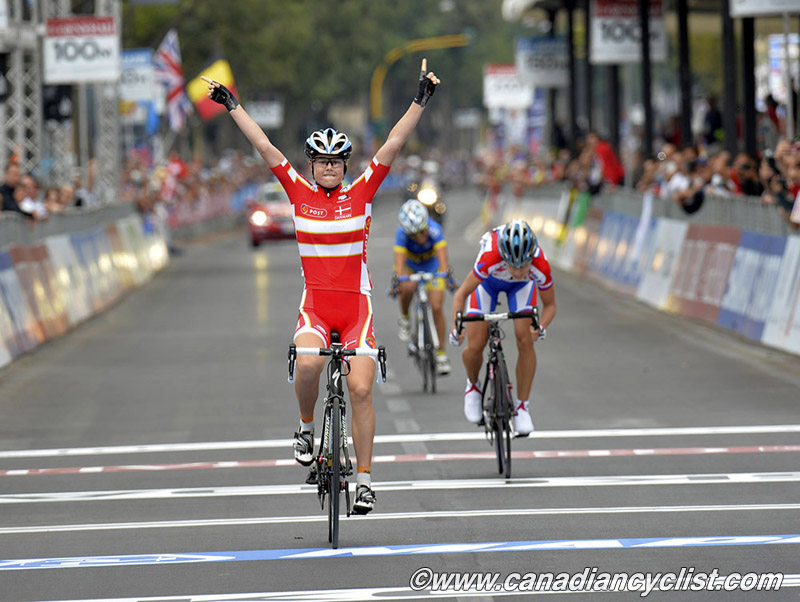 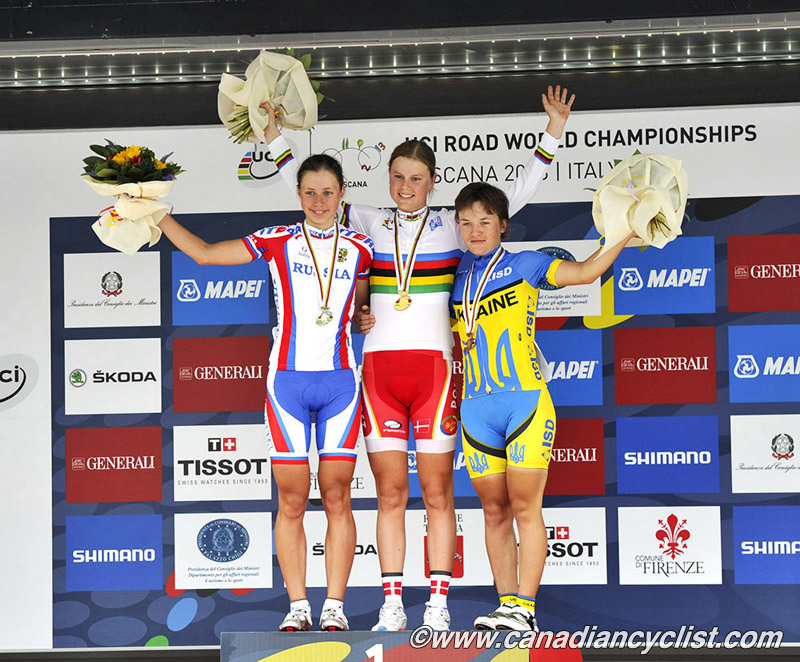 We have interviews posted with Canadians Tessa Pinckston, Kinley Gibson (51st) and Dafne Therouz-Izquierdo (57th).  Marie-Eve Poisson did not finish. 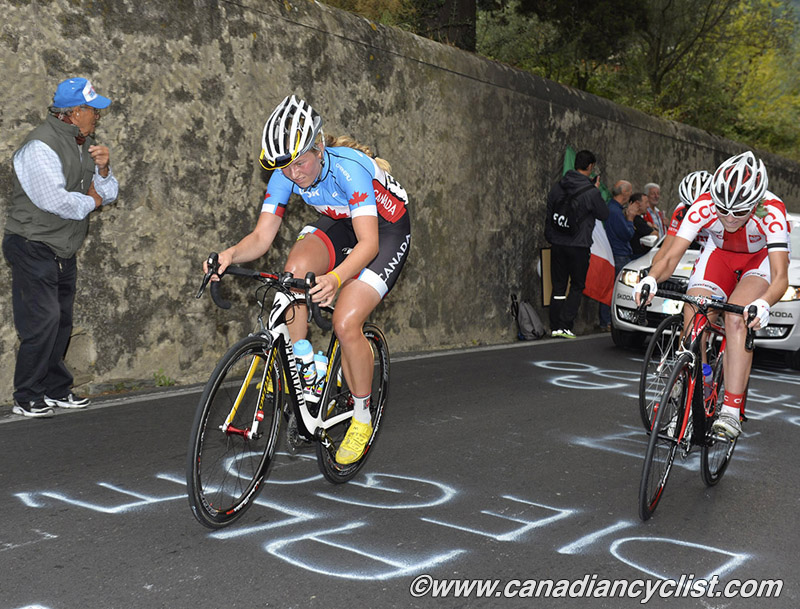 The Under-23 men started in the town of Montecatini, where many of the time trials began.  After a 57.2 kilometre ride into the circuit there were five riders clear - Jaka Bostner (Slovenia), Kolya Shumov (Belarus), Meron Teshome Hagos (Eritrea), Ihar Mytsko (Belarus), Pierre-henri Lecuisinier (France) - with over four minutes on the bunch.  However, the group began to fall apart, and the last riders were caught as the rapidly shrinking peloton pulled them back with three and a half laps to go. 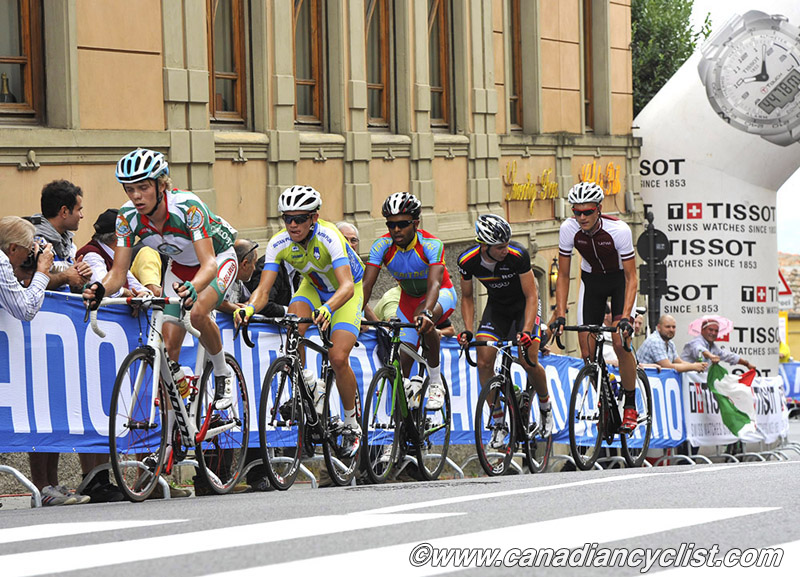 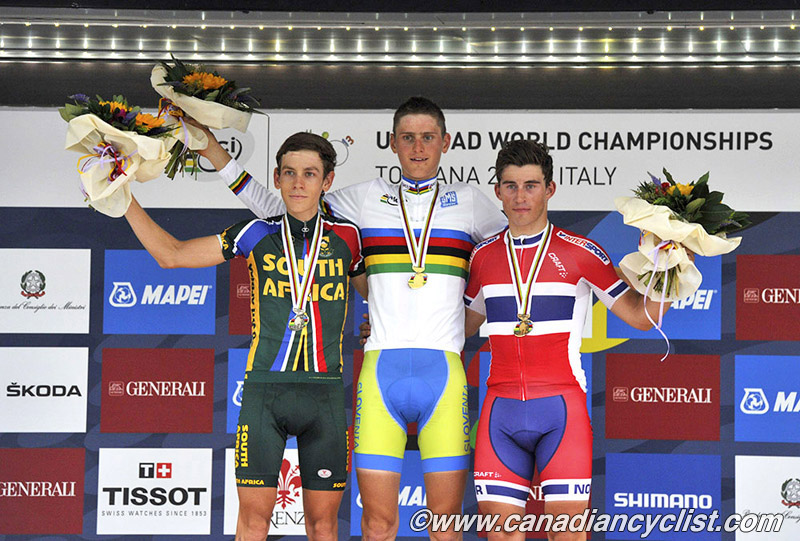 Tour de l'Avenir stage winner Julian Alaphilippe (France) attacked and went clear with two laps to go.  Dylan van Baarle (Netherlands) bridged up and the two rode well for a lap, widening the gap to a disorganized peloton.   Mohoric, the Junior world champion last year, taking advantage of the lack of organization bridged across on the last lap, dropping the Dutchman then dropping the Frenchman to solo in ahead of Louis Meintjes (South Africa), with Sonder Enger (Norway) winning the small bunch sprint for the bronze medal. 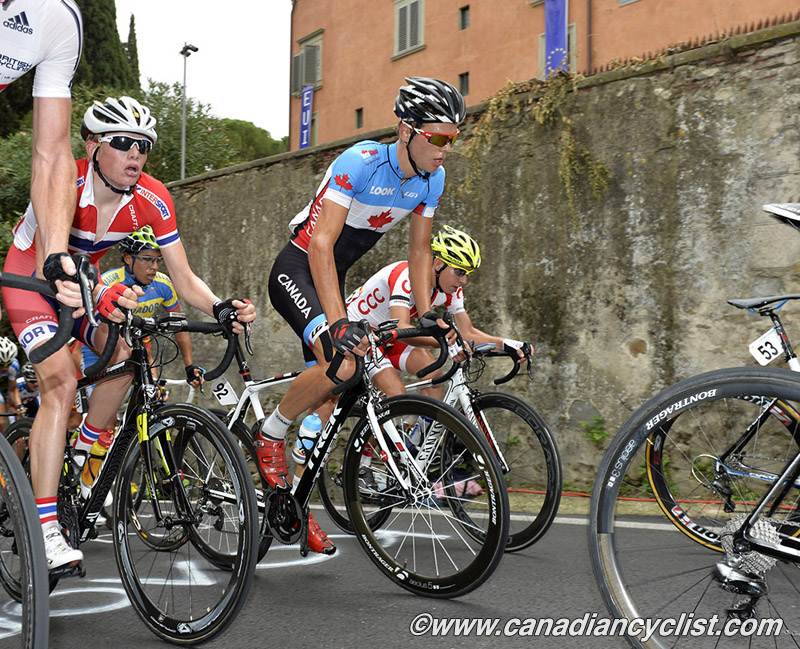