"We strive to raise the bar each year to present an Amgen Tour of California that not only continues to attract and challenge the world's top cyclists, but also fittingly features and promotes California's unique sights and striking scenery," said Kristin Bachochin, executive director of the Amgen Tour of California and senior vice president of AEG Sports. "We're confident our worldwide audience will enjoy everything next year's race has to offer - from epic climbs to rolling hills and thrilling finishes by sea, it's a testament to California's iconic terrain."

The first day of racing will begin and finish in the state's Capital of Sacramento, which previously hosted 2009's spectacular prologue as well as the stage finishes in 2007, 2008, 2010 and 2011.

"The City of Sacramento could not be more proud to host the Amgen Tour of California and Stage 1 to kick off race festivities for such a distinguished group of athletes," said Kevin Johnson, mayor of Sacramento. "There is no better way to start the race's route through California's iconic landmarks, attractions and scenery than in the state's capital city."

The following day, the Individual Time Trial (Stage 2) will see racers competing against the clock in the former gold rush city of Folsom, which makes its race debut this year. For Stage 3, the peloton will return to California's third largest city, San Jose (the only city to have participated in all nine editions of the race), for a stage start before traveling more than 50 miles north, gaining altitude as the route winds up Mt. Diablo for mountaintop finish at the famed summit for the second consecutive year.

The arts community of Monterey, which last hosted the race in 2006, will be the setting for the Stage 4 start. From there, the race will traverse approximately 100 miles south to finish the day in the seaside village of Cambria, which also makes its race debut in 2014.

Stage 5 will kick off in the "Clam Capital of the World," Pismo Beach, where riders will be treated to sights of the city's famous sand dunes for the first time this year. Additionally, sweeping ocean views will provide the perfect backdrop for racers and spectators alike as the route continues south to the American Riviera-like town of Santa Barbara for the Stage 5 finish.

Santa Clarita will host the Stage 6 start, before riders head to Mountain High for another mountaintop finish. The peloton will return to Santa Clarita for the Stage 7 start and will finish that day in the historic town of Pasadena.

The eighth and final stage of the 2014 Amgen Tour of California will start and finish in the title sponsor's home of Thousand Oaks, which played host to the official race finish in 2010 and 2011.

Carrying an elite distinction, the Amgen Tour of California is listed on the international professional cycling calendar (2. HC, meaning "beyond category"), awarding important, world-ranking points to the top finishers.

The 13 Host City partners for the 2014 Amgen Tour of California: 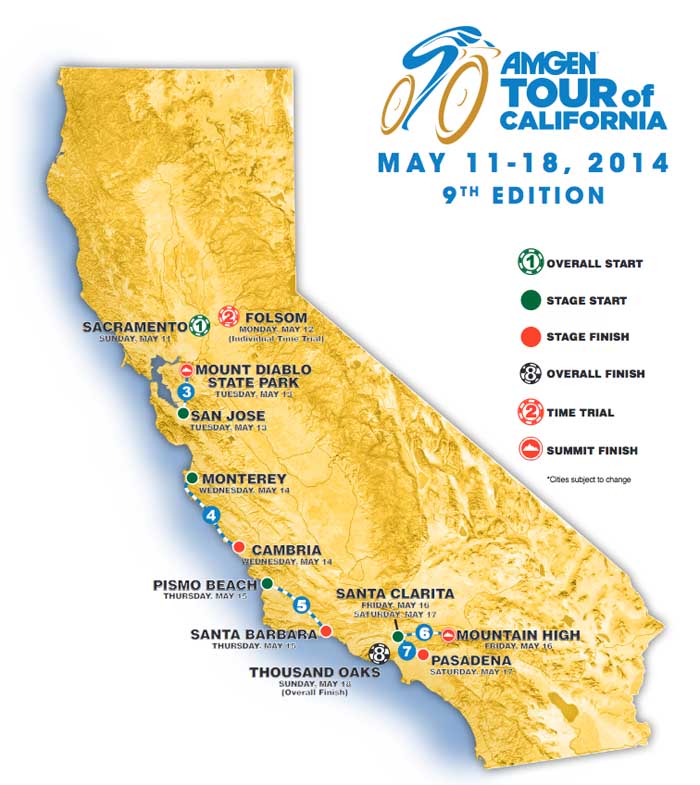