Canada's track cycling team celebrated a gold medal and a fourth place at the final track World Cup event of the season.

The three-day World Cup started off in superb fashion with victory for the women's team pursuit squad, despite competing without Gillian Carleton (Victoria, BC) due to illness. Alternate Allison Beveridge (Calgary, AB) lined up for the first time alongside Jasmin Glaesser (Vancouver, BC), Stephanie Roorda (Vancouver, BC) and Laura Brown (Vancouver, BC) and the team qualified with the fastest time of 4:23.828 in the afternoon session, sending them to the gold medal ride against the U.S. in the evening. 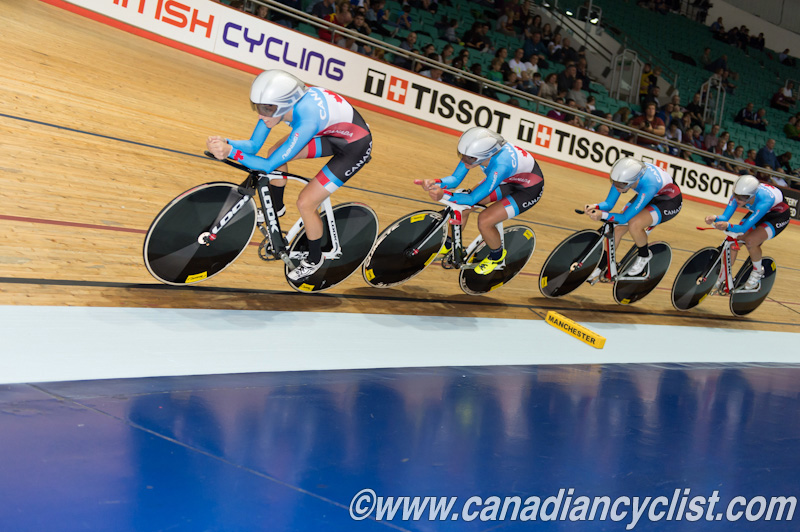 The ride for gold against the US squad only lasted 3000 metres out of the normal 4000, as the Canucks ended the race early by gaining a half-lap to catch their rivals and win gold.

The gold medal performance from the Canadian quartet not only meant that Canada would win the overall World Cup title in the women's team pursuit but it also meant that Allison Beveridge would step on the podium in her first participation in a World Cup event as a starter.

The second day of competition was marked by joy and frustration for Hugo Barrette (Cap-aux-Meules, QC) in the men's Keirin.  Going into the repechage for the first round Hugo broke his handlebars on the start and was forced to restart the round riding on regular road bars. Focussing on the task at hand, Hugo was still able to win the repechage to progress on to the semifinals.

Now with proper track sprint bars back on his bike, Hugo continued his great performance to win the semfinal heat and move onto the finals. Once in the finals a podium performance was well within reach, as two riders were eliminated for passing the pace motorcycle. This forced a restart with only four riders and Barrette crossed the line second, only to be relegated for having made an illegal move involving British rider Alexander Lewis with 1.5 laps to go. Despite ending up fourth, this marked the first time that Barrette has made it to a Keirin final at a World Cup, which marks a significant milestone in his short career.

Also flying the flag for Canada on the second day was Beveridge in the women's Omnium, finishing 10th in the Flying Lap, second in the Points race and eighth in the Elimination race to end the first day of the Omnium competition, to sit sixth overall.

On the third and final day of competition Joseph Veloce (Toronto, ON) and Barrette were the first to hit the boards in the men's Sprint qualifier. Neither of them were among the top-16 that made it through the next round but their times were solid, considering that this World Cup was the first competition for Veloce since being seriously injured in a crash in Colorado in the summer and that Hugo had not fully recovered from the previous day's races.

In the women's Omnium, Beveridge was 11th in the 3000 metre Individual Pursuit, 13th in the Scratch race and 13th place in the 500 metre Time Trial, to finish a respectable ninth place overall.

"Overall, this World Cup has been a good one for the Canadians where some were able to rise to the occasion and gain experience, performances and notoriety on the world's stage," said Jacques Landry, High Performance Director - Head Coach of Cycling Canada. "The fact that we have new faces reaching the podium or getting really close to it is a testament to the great work that is being done by our coaches and support teams to identify new talent and to fast-track the development of that talent. We are in a very good position right now and it's only improving."

"This has been an encouraging week when you factor in where the team is at in its training cycle. Allison's performances were good and this competition was definitely a good opportunity for her to gain valuable experience," said Craig Griffin, Head Track Endurance Coach for Cycling Canada. "The weekend's performances confirm that everything we are doing is going in the right direction. These are exciting times going into the world championships having a lot of momentum and a full six weeks to continue building."

The Canadian team will be back in action at the Track World Championships in Cali, Colombia, from February 26th to March 2nd.