Hoping to replicate their success in London, and with all eyes turned steadfastly toward the 2016 Summer Olympics, Team TWENTY16 Pro Cycling has announced an all-star roster of riders and staff that is focused and committed to fulfilling the Olympic dreams of their team of gifted athletes.  The team consists of American women with the exception of Canada's Lex Albrecht. 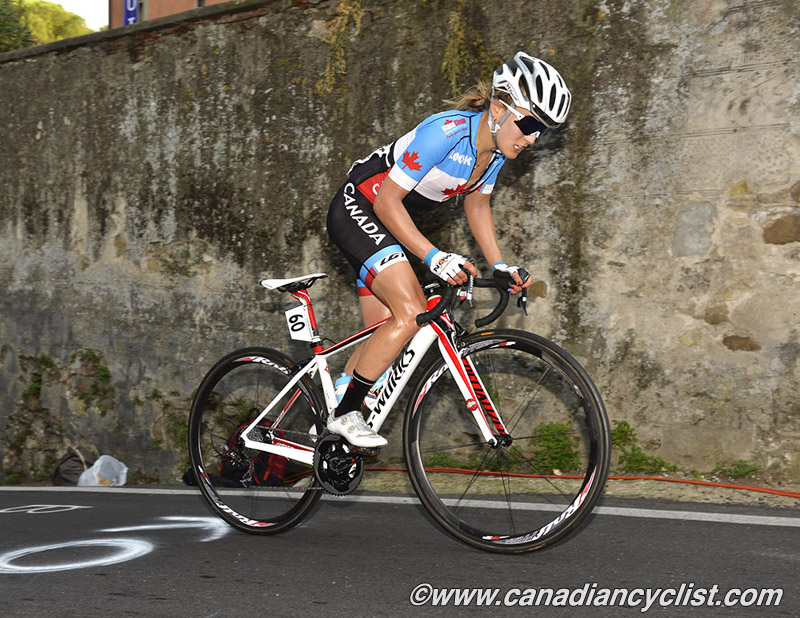 Lex Albrecht at the 2013 Road World Championships in Italy

Team TWENTY16 reunites three 2012 Olympians - Sarah Hammer, Jennie Reed and Dotsie Bausch - who together rode to Silver in the 2012 London Olympics in the Team Pursuit after a dramatic victory over the powerful Australian team catapulted them into the Gold Medal round. Hammer joins the team as both a partner and rider, while Bausch comes in as rider, track team visionary and partner and Reed as High Performance Director for the Track squad. The three add depth to an already golden line-up that owns a combined 2 Olympic Gold Medals, 5 Olympic Silver Medals and 15 World Championship Medals.

In addition to the three London superstars, the team has added Olympic Silver Medalist and World Champion Mari Holden to the staff as Sports Director. "After several years away from competition, I was looking for an opportunity to get involved with a development riders and I was thrilled when Nicola offered me the chance to work with both the elite team and the juniors at TWENTY16 Pro Cycling," commented Holden. "I believe that it is very important to give back to the sport that gave me so much. This team is a perfect example of some of the most successful women in US Cycling mentoring and giving back to the future generation. I am proud to be a part of it."

"When we named the team TWENTY12 in 2009, we set the expressed team goal of taking our athletes to success at the 2012 Olympics in London. What we accomplished was amazing - two Olympic medals; gold and silver. It was bold - setting our sights so openly, so publicly on the Olympics but we felt it gave us focus, firmed our resolve. With this incredible roster of riders and gifted staff, we are very much focused on the Rio Games in 2016 and then beyond that to 2020," says team founder and General Manager Nicola Cranmer.

"The team consists of fifteen professional athletes and a strong group of eleven of the top Junior Women in the US racing ages 11-18. This youth movement is tremendously important to the team's identity as is the support of USA Cycling. Without USA Cycling we could not achieve these goals," says returning team High Performance Director and two-time Gold Medalist, Kristin Armstrong.

Armstrong continued, "This team model, with it's professional/junior mix, is unique. It affords our professional and experienced riders the opportunity to perform at their highest potential while offering the junior women the chance to benefit from a ground-breaking mentoring program. We are hoping to do nothing less than develop the next generation of champions and leaders."

Along with its road emphasis, the team is also returning to its track racing roots with a renewed emphasis on the speciality. "We have a number of truly gifted track racers on this team and we will focus on on developing these talents as 2016 approaches," said Cranmer. "Track racing, World Cup and Olympic track racing in particular, is thrilling. It's fast, intense, it's dangerous, pure and beautiful. We are excited to see what our riders can do in that arena."