The Cyclo-cross World Championships return to Hoogerheide this weekend, after first hosting them in 2009.  The small Dutch town is in the southwest of the Netherlands, close to the Belgian border, guaranteeing that thousands of rabid Belgian fans will flood across the border.

The circuit is similar to the one used in last year's World Cup, although it has been lengthened by 200 metres to 3.4 kilometres.  The amount of pavement has been reduced, and natural elevation differences will be used for climbs rather than stairs. 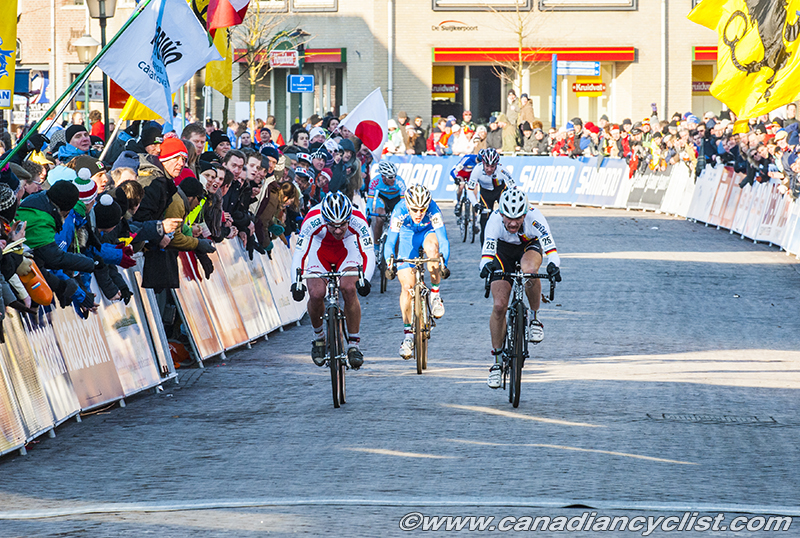 The finishing straight will be in town - file photo 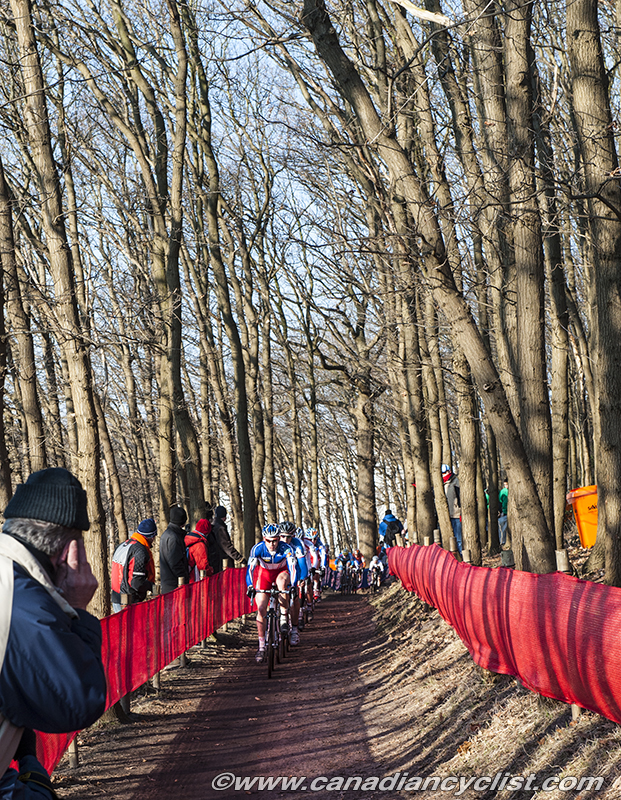 The largest portion of the course is on grass so, even though forecasts are calling for sun on the weekend, recent rain and damp conditions are likely to keep the course muddy and slow it down significantly.  There are a number of off-camber corners, which could also be a factor if it stays muddy, as expected.

Organizers say that they have improved upon spectator access after the problems in 2009, when tens of thousands (estimates put it at 70,000) clogged the crossing points and forced an abrupt closing of them halfway through the men's race. 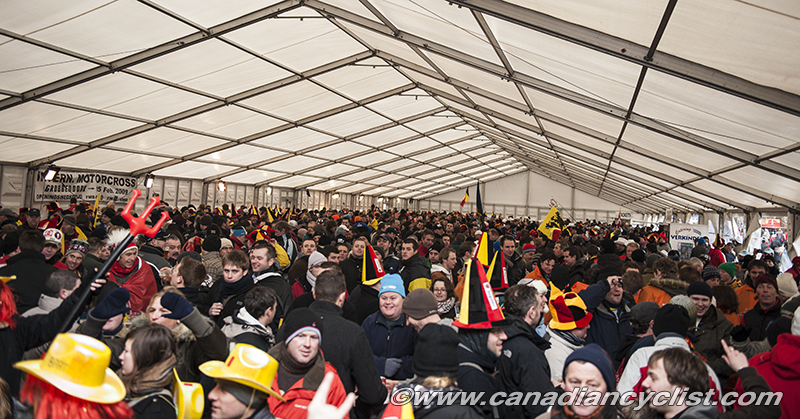 The beer garden will be a popular place 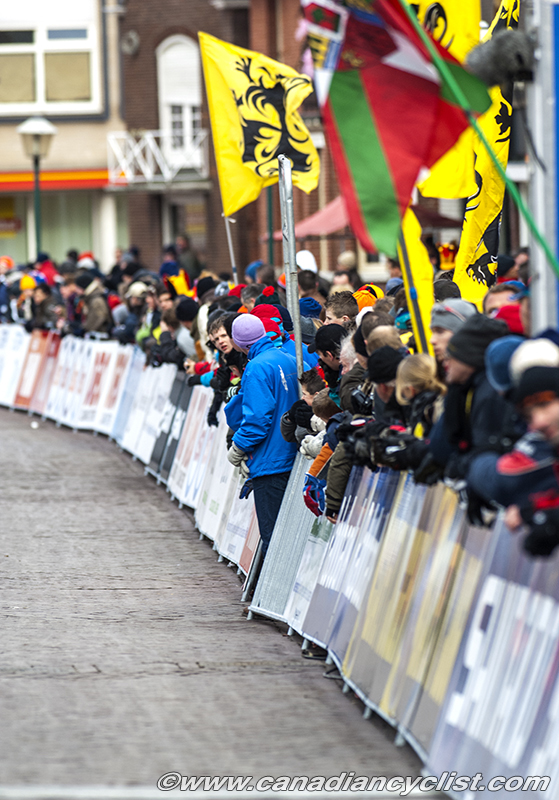 Fans line the finishing straight in 2009

The UCI has also introduced a schedule change, moving the women from Sunday morning to Saturday afternoon (after the Junior men).  The goal is to make the women the focus of the day, rather than a prelude to the Elite men's race.

The Elite women is expected to be another showdown between defending world champion Marianne Vos, racing before a home crowd, and World Cup champion Katie Compton (USA).  Compton dominated the World Cup this season, winning the overall title with one race to go, and looking good to finally win the world title that has eluded her.  However, the American had to drop out of the final round of the World Cup in Nommay, France, last weekend after suffering an asthma attack, and the team said mid-week that she is still recovering. 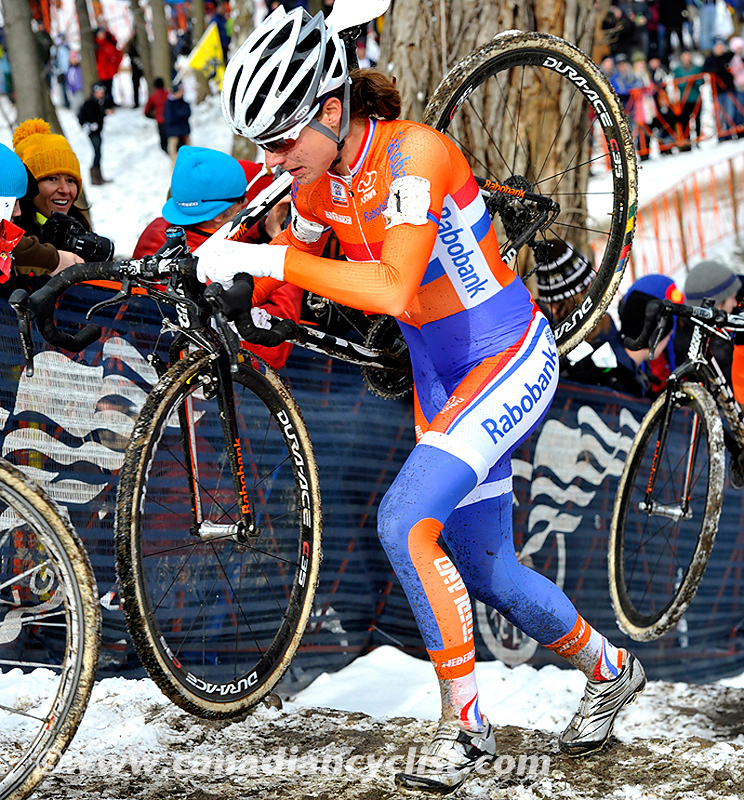 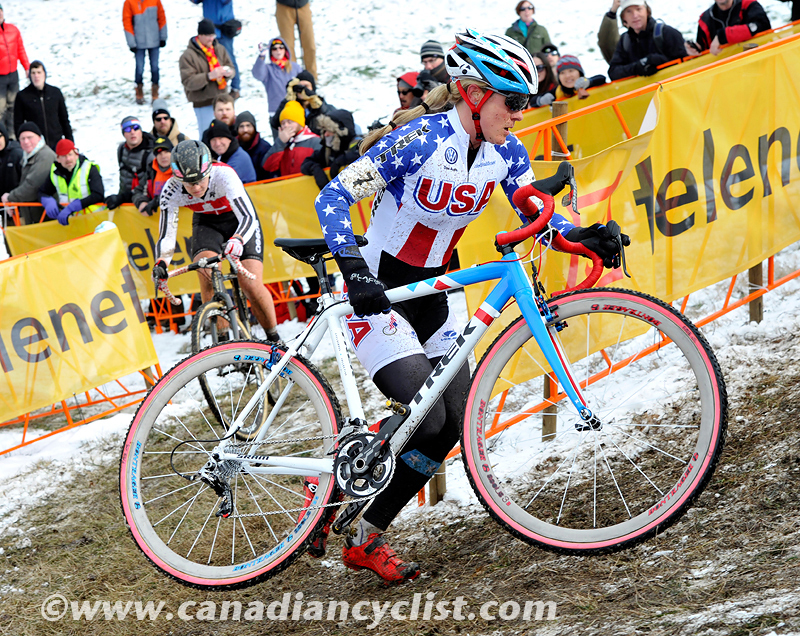 Vos, who has six cyclo-cross world titles, including the last five consecutive ones, had a slow start to the cyclo-cross season after undergoing surgery to remove a cyst from her back.  Despite that, she has been the only rider to truly challenge Compton all season (winning Nommay) and will certainly want to perform well in front of a home crowd.

Other possible podium contenders include European and British champion Helen Wyman (second to Vos in Nommay), her compatriot Nikki Harris and Belgian Sanne Cant.  Canada has no women competing in the women's race.

The Elite men's race has had a last minute addition to the ranks of podium contenders with the start list addition earlier today of two-time world champion Zdenek Stybar (Czech Republic).  Stybar has moved primarily to the road with Omega Pharma - Quick-Step, and has remained coy about his participation, but his team put out a release in the past few hours saying that Stybar rode the course today and will race on Sunday. 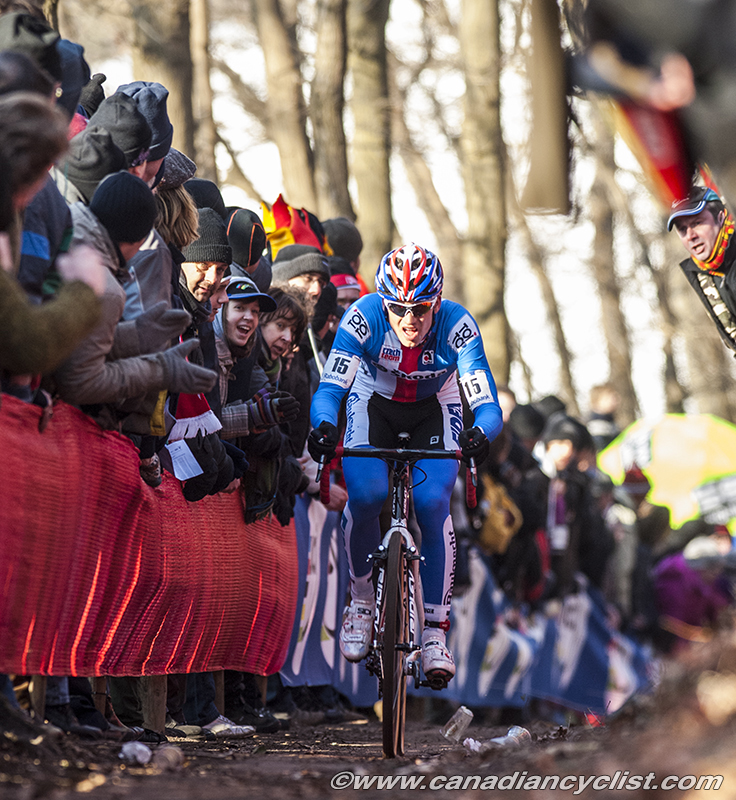 "I'm in good condition," Stybar said. "I came from important training sessions in Mallorca and I'm ready to compete. I like the parcours even if today I couldn't really train on all of it. As I said a few weeks ago, if I decide to do Worlds it is because I feel that I can do well. The podium would be a great result even if the competitors are really strong, especially Sven Nys who showed his class in the last races. I will do my best to be competitive. Normally the parcours will be hard because of the rain the last few days. I like these kind of conditions even if I hope it won't rain on Sunday. From today till the last day of the race I won't do much following some decent training in Mallorca. I will take advantage of the next days to recover a bit and find a good set up and feeling with my Specialized Crux bike. I'm really looking forward to the race. Worlds are always special and they gave me a lot of notoriety in the past." 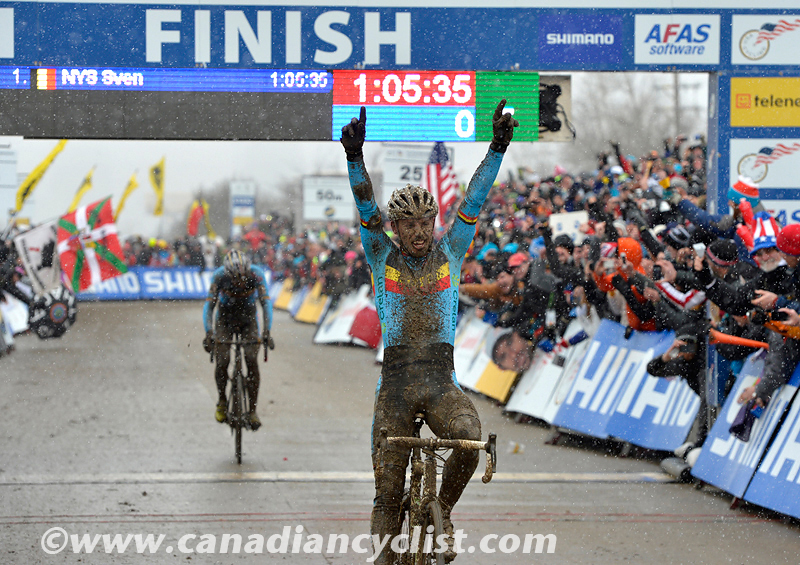 Stybar pointed to the number one favourite, defending world champion Sven Nys of Belgium.  Nys skipped Nommay for a training block, but has been consistently strong all season.  Niels Albert, his countryman, won in Hoogerheide back in 2009, and won the Rome World Cup, but since then was struck down by the flu and struggled last weekend in Nommay.

Dutch favourite Lars van der Haar, the World Cup champion, has been a consistent podium presence all season, but many pundits think that a muddy, slow course will hurt his chances.  Another podium possibility is Frenchman Francis Mourey, who won the Namur round of the World Cup and was very strong in the muddy conditions at Nommay, just losing to Belgium's Tom Meeusen, in a sprint. 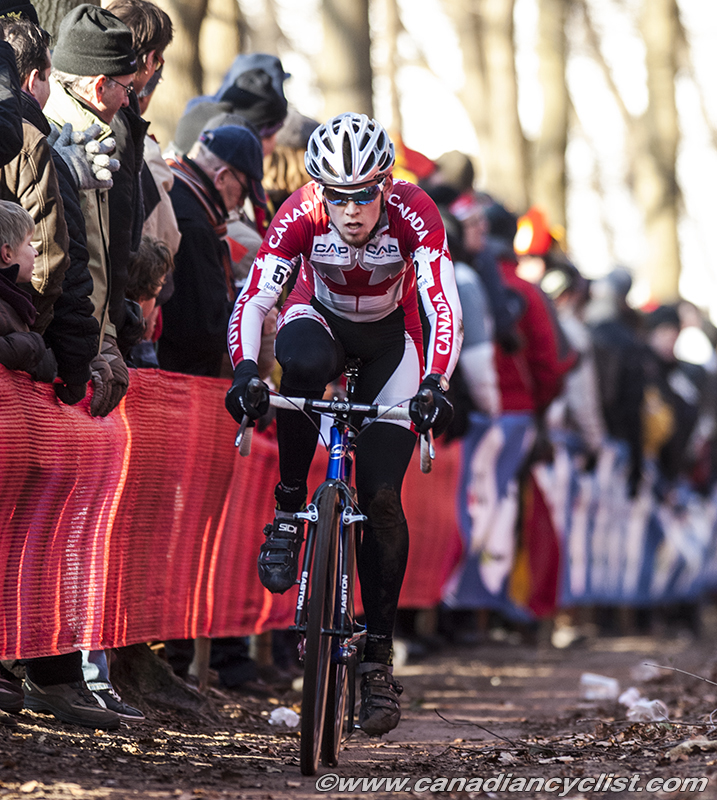 Aaron Schooler was on Team Canada in 2009 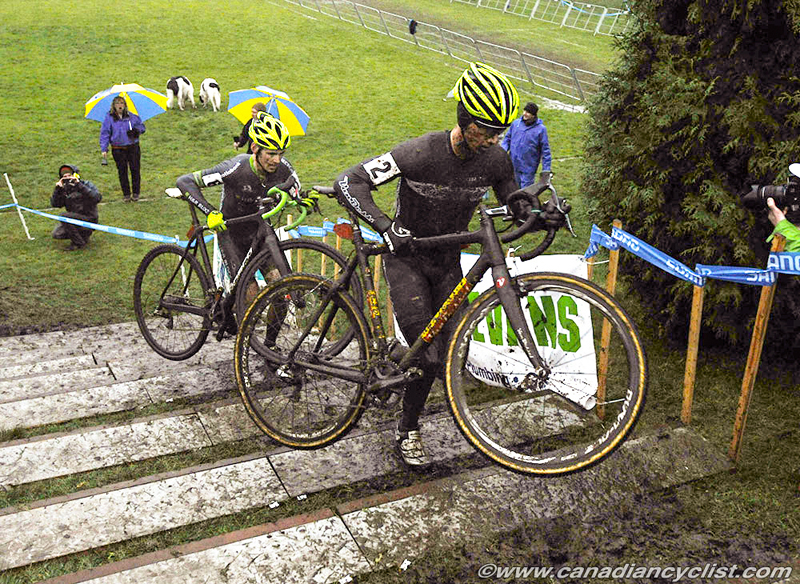 Mike Garrigan leading Aaron Schooler at the 2013 Nationals in Vancouver

The Junior men start the racing at the Worlds, on Saturday morning.  This year, with the graduation of Mathieu van der Poel (Netherlands) to the Under-23 ranks, the possibilities have opened up for a new world champion.  Last year's bronze medallist, Adam Toupalik (Czech Republic) has dominated the Junior category this season, winning the World Cup.  European champion Yannick Peeters (Belgium), second to Toupalik in the World Cup, is expected to be his heaviest competition. 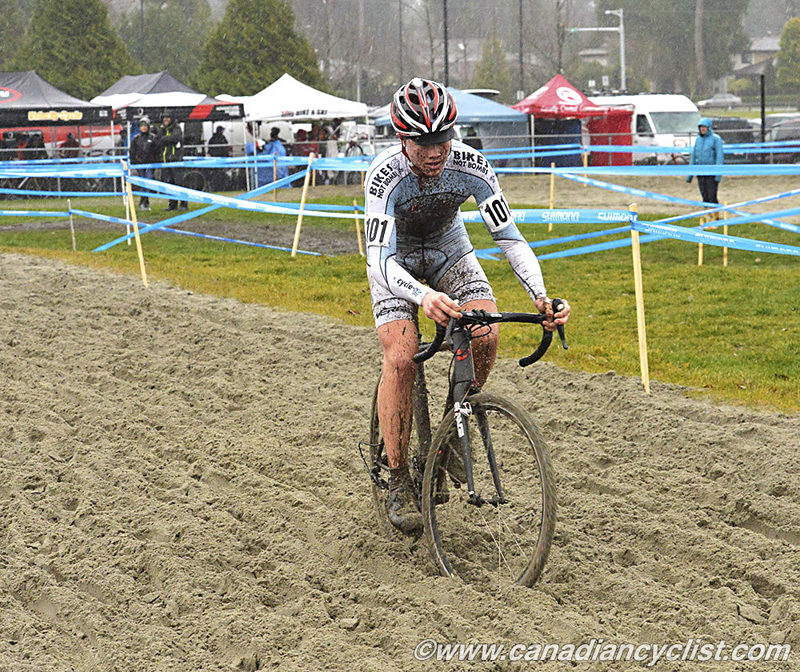 The Under-23 men, who will now race Sunday morning, have the aforementioned Mathieu van der Poel as the favourite.  Despite being a first year rider in the category, van der Poel won the World Cup title.  His competition is expected to come from Belgium's Wout Van Aert, who twice beat van der Poel on the World Cup circuit, including last weekend in Nommay. 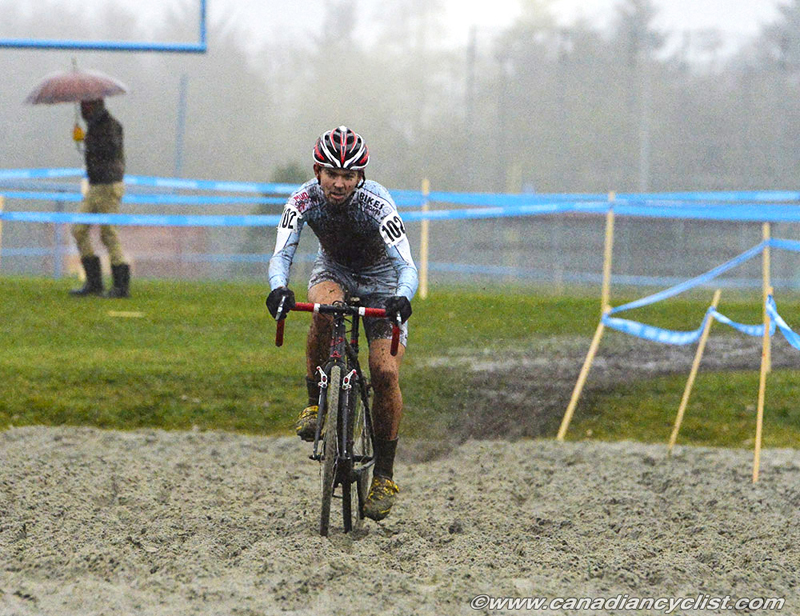