Once again, Marianne Vos of the Netherlands has proven that she is untouchable when it comes to the Cyclo-cross Worlds Championships, winning her sixth Elite Women's title in a row on Saturday before a home crowd, and the seventh of her career.  In fact, Vos has won every world title since the last time the Worlds were held in Hoogerheide, in 2009.  Eva Lechner (Italy) took silver and Helen Wyman (Great Britain) bronze.  Canada had no riders entered. 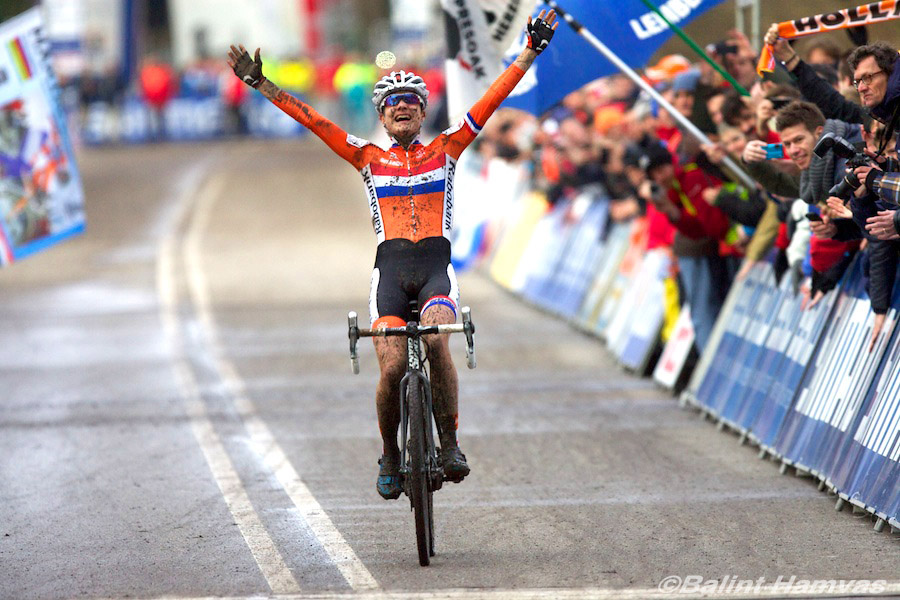 The expected battle with World Cup champion Katie Compton (USA) did not materialize, after the American had a very poor start and then half a lap into the race got her bike tangled up with Pavla Havlikova (Czech Republic).  This put Compton well down before the first lap was finished. 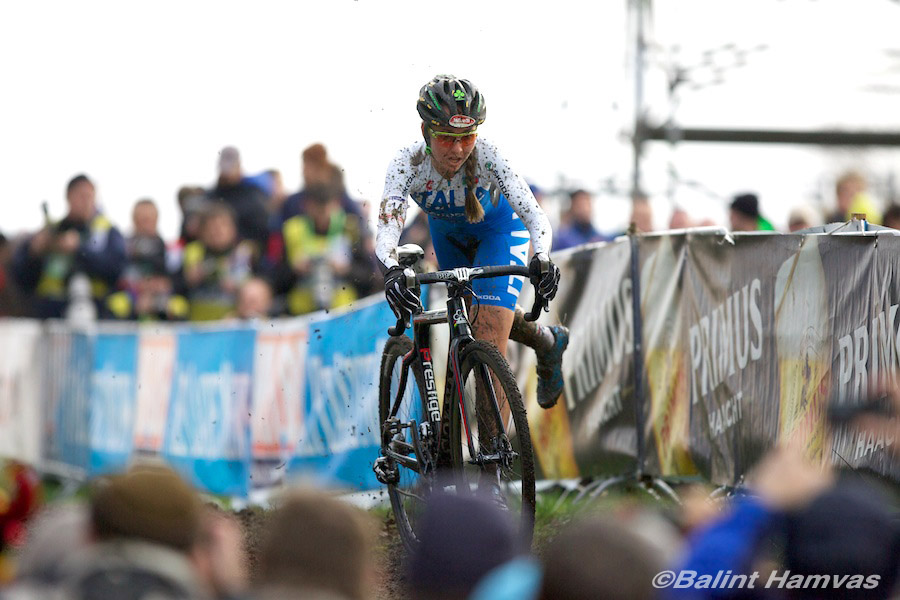 Lechner, known for her fast starts on the mountain bike circuit, took the lead from the gun, with Vos quickly joining her, as well as Wyman.  Vos then went to the front and started to push the pace, with Wyman quickly dropping off.  Lechner matched Vos for most of the first lap, but started to fall back just before the end of the lap, and had to set her own pace.

From this point on, the first two spots were set, with Vos not backing off at all and eventually increasing her lead on Lechner to over a minute by the finish.  Behind, Wyman and Sanne Cant (Belgium) were swapping third regularly, as each capitalized on the mistakes of the other in the slippery mud.  Compton was moving up steadily, to fifth by the halfway point in the race, and catching the other two on lap three of the four lap race.

The American moved into sole possession of third briefly, and the gap to Lechner was dropping, but then Compton started to falter, and was caught again by the other two, as she began to visibly struggle on the climbs and muddy running sections, the effort of her earlier chase catching up with her.

By the start of the fourth and final lap, Vos was nearly a minute up but not backing off, while Lechner held a slim 17 second lead on Wyman and Cant, and 29 seconds on Compton; a gap which could easily disappear with one mistake.  However, the mistake was by Cant with half a lap to go, giving Wyman the opportunity to open a small gap.

Vos rolled across the line with her arms in the air, to the clear pleasure of thousands of Dutch supporters, 1:07 ahead of Lechner, with Wyman a further ten seconds back, just three seconds in front of Cant.  Compton, who was clearly disappointed, finished a distant ninth, losing 1:41 on Wyman in the final lap.

"All the people yelling and screaming my name around the course really helped," commented Vos, "but you still have to push yourself all race.  I was in the lead with Eva in the first lap and I didn't feel too good, but I tried to power away on the hill.  I got a little gap and I knew it could be enough."

However, Vos admitted that it was a gamble to go that early.  "It wasn't the plan to go that early, but when I saw that the two of us had a gap, I thought 'this is a chance'.  It's a hard lap [course], so the gap can get really big.  From last week [Nommay World Cup, which she won] I felt really good, so I knew I had a good chance.  But after the [rain] from last night, everyone was wondering 'will I be strong enough?'.  But it's great to win here in the Netherlands, I'm really happy with this title."