Cycle of Lies: The Fall of Lance Armstrong, by New York Times journalist Juliet Macur, is the latest book about disgraced cyclist Lance Armstrong. Unless Armstrong himself decides to write an autobiography - a real one, not his previous fairytales - then Macur's book is likely to be as close as we get to a true picture this man who inspired so many, and who's fall from grace may be swiftest and most devastating in the history of sport. 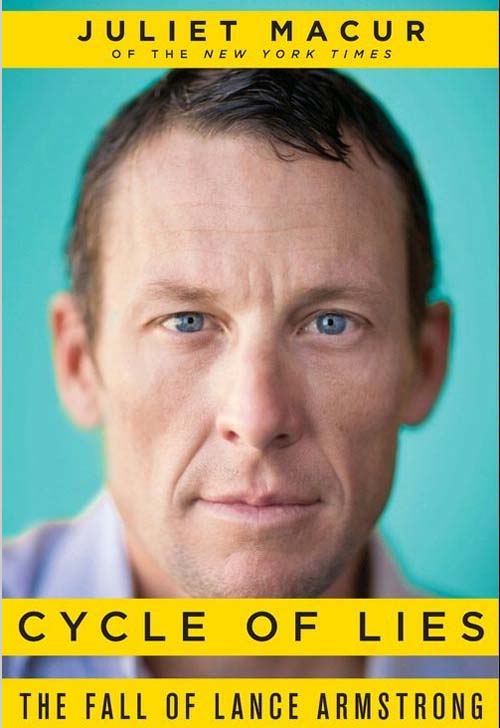 Macur's book is somewhat similar to Wheelmen by Reed Albergotti and Vanessa O'Connell [see our review of Wheelmen], in that it takes a mostly chronological look at Armstrong's career. However, whereas Wheelmen is a dry and fact-based compendium of details drawn from the public realm, Cycle of Lies is much more personal, with Macur getting access to many of the protagonists, including Armstrong's birth family, stepfather, early supporters, teammates and anti-doping investigators, plus Armstrong himself.

She talks to his paternal grandmother and Terry Armstrong (who gave him his name). The family of J.T. Neal - Armstrong's early mentor who died of cancer, ignored by Armstrong - gave her access to hours of tapes Neal recorded before his death. David Zabriskie and Jonathan Vaughters, teammates of Armstrong, speak here with more candour and emotion than in the past. Both talk about the pressure to dope that was exerted, both by the sport and by Armstrong and Bruyneel.

Armstrong had an interesting relationship with the press. Much of the U.S. cycling media played 'yes man', since they were so desperate for access to Armstrong. The rest of the cycling media (including me) were basically ignored, since we had little perceived value. The more general media were divided into sycophants and the enemy, with Armstrong paying close attention to the latter.

So, while I attended many press conferences and media scrums with Armstrong, I was only the object of his attention a couple of times. Macur, on the other hand, writing for an extremely important publication - the New York Times - was known to Armstrong on a first name basis.

During his glory years, when he was cocky, Armstrong would call on individuals like Macur in press conferences, daring them to ask doping questions so he could shoot them down. In many ways, Armstrong had more respect for the writers who stood up to him than those who didn't. So, after everything fell apart for Armstrong, he invited Macur to visit him at his Texas ranch as the moving company was taking everything away, and spoke candidly.

This book provides many, many examples of Armstrong the bully, Armstrong the cheat, Armstrong the sociopath. However, it also points to the traits that propelled him to incredible successes; the drive, the ambition, the toughness and, yes, the talent. You certainly won't like Armstrong after reading Cycling of Lies, but you may have some grudging respect; as Macur clearly does.

There are plenty of quotes, but these two, I think, sum up Lance Armstrong's beliefs:

"If people think I cheated to win the Tour de France," Armstrong says, "They're fucking dumb. I didn't cheat."

You broke the rules.

"I did, but we all did," he says. "All two hundred guys that started the race broke the rules."

He isn't sorry for lying. Not for the original lie or any other in the cycle of lies that followed. "We all would have lied," he says. "You would have lied."

Sadly, there's a good chance that he is correct.