Grahame Rivers (Realdeal), the winner of the Steaming Nostril has written a report on the race.

Anyone who has ridden Steaming Nostril will tell you about the pain that awaits on the snowy, icy, wet and mud filled rail trail. The pain of doing it once isn't good enough. After having clawed your way out of the rail trail, racing 60 km of snow covered dirt and gravel roads, you're forced to ride the trail one more time before crossing the finish line. The return trip is where most people are "broken". Pictures often reveal pain filled and desperate faces.

This year's race lived up to its name with temperatures well below -10 on the start line. With a better understanding among all riders of the importance of getting onto the rail trail at the head of the bunch, the neutral start was not so neutral but I was able to get onto the trail with the lead group.

There were already some deep ruts in the snow covered trail - which was nerve-racking in this fast paced group. I did my best to stay attached to the back and prayed that Nathan Chown did not attack off the front – as there would be no way I could respond.

The lead group came out of the rail trail with roughly 20 riders, which included Nathan Chown, Peter Disera, Mark Brusso, Tim Marshall and Peter Morse. And in what is certainly the Rule #5 award of the day, Gaelen Merritt broke away solo almost immediately after leaving the trail – and stayed away for the rest of the day.  The group was never able to organize itself. From what I could see from my sheltered attempt to do as little work as possible, two riders from Morning Glory Cycling Club, Tom Nesbitt and Kevin Higgins, did the majority of the pace setting.

With Gaelen becoming little more than a dot on the horizon, there were a number of attacks in the peleton. Nothing stuck until Tom Nesbitt made his second attempt to get across. As Tom started to disappear into the distance, I looked around the group seeing Chown sitting very comfortably and knew that if I didn't come into the trail well ahead of these guys I was going to have no chance. So I jumped. I didn't let myself look back until I had made up half the distance to Tom. When I did, the peleton was well off in the distance. 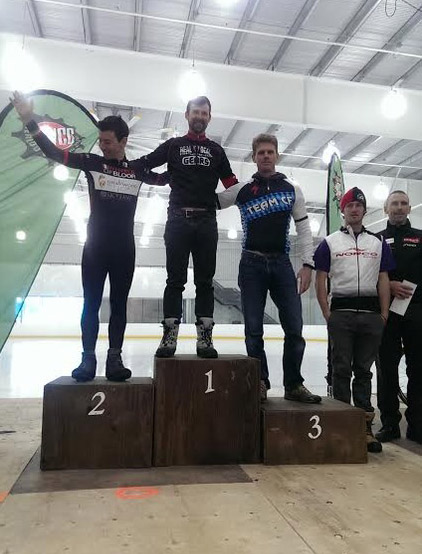 I've got to be honest, without Tom's work, I would never have made it across to Gaelen. It was clear that Tom had given everything to get us to Gaelen. As he came through to take his pull and I immediately came around him and told him to take another one off but the effort to get across had cost him too much. Tom was off the back and it was just Gaelen and myself left.

Gaelen and I were able to build up a two minute lead on the peleton. As we prepared to re-enter the rail trail and make the short trip to the finish, we wished each other luck knowing that cooperation would no longer be of much benefit. I came into the rail trail first. There was no big attack. I just rode as fast and as hard as I safely could.  The trail was much smoother and faster than on the way out but I was too afraid to look back for fear of crashing. When I finally exited onto the road, I looked back and I was on my own. I crossed the line and won my first race of the year. Gaelen took second and Chown came in third.

I want to thank my team Real Deal Racing and sponsors for their help in getting me on the podium. I also want to thank Cycle Waterloo for hosting Steaming Nostril and making this great race happen.