The UCI has been exploring changes to the current structure of men's road racing at the highest level for some time.  Demands from teams, current and potential race organizers, and sponsors, have all pointed to the fact that existing structure of the pro men's road circuit is not up to the needs and financial conditions of the sport.  Now, finally, the UCI has laid out the structural changes they are planning and the timeline to implement them.

In the first issue of newsletter called Info Reform, the UCI has detailed the changes that will be coming to the sport.  The newsletter can be downloaded Here.

In this first issue, our aim is to provide an overview of the reform. It is essential that all members of the family of cycling are aware of how our sport will look in the future and what processes will be required to achieve this.

One year ago, the UCI set up a working group of stakeholders - riders, teams, organizers and the UCI - as well as conducting surveys with both the general public and the 'cycling family' [we were consulted as a cycling media stakeholder].  A draft version of the proposed reforms was produced in time for the UCI Congress at the Road Worlds last September, where it was approved by the UCI Management Committee and the Professional Cycling Council.

While numerous details are still to be worked out, the broad structure and timeline for implementation have been decided upon.  Almost all of the changes involve the Division 1 calendar and teams, currently consisting of the ProTeams and World Tour / Grand Tour circuit.  The Continental circuits and the UCI Pro Continental / Continental team divisions will see very little change.

However, in addition to rankings for the various divisions, a "Universal" Individual ranking for all riders across all circuits will be developed, and Nation rankings will be compiled from this Individual ranking.  It is much too soon to know how this will impact countries such as Canada, which have few riders on Division 1 teams and struggle to attain more than a token representation in men's road racings at events such as world championships and Olympics.

So, to get to the details of the reforms, here is a summary:

The changes will happen at what is now the ProTeam (Division 1) level, currently consisting of 18 teams.  The First Division will be split into two categories - 1A and 1B.  The 1A will be the top category (equivalent to the current ProTeam category), consisting of 16 teams with a maximum of 22 riders each.  The 1B category will have 8 teams, also with a maximum of 22 riders.  Each of the 24 First Division teams will eventually have a separate development team of 8-10 riders.

The 1A teams will have automatic (and mandatory) admission to 120 days of racing that is made up of the biggest events on the calendar - the Grand Tours, other significant stage races, Classics and 'emerging events' (likely non-European races, such as current WorldTour races in Canada, China, etc.).

The 1B teams will have 50 days of racing made of of events yet to be determined on a '1B' circuit (but likely to be existing significant events that don't make it onto the 1A circuit).  They will have mandatory attendance to those events.

There will also be the five existing Continental Tours (Europe, America, Asia, Africa and Oceania), which will have events ranked as HC (Hors Catégorie), Classe 1 and Classe 2, as they currently do. 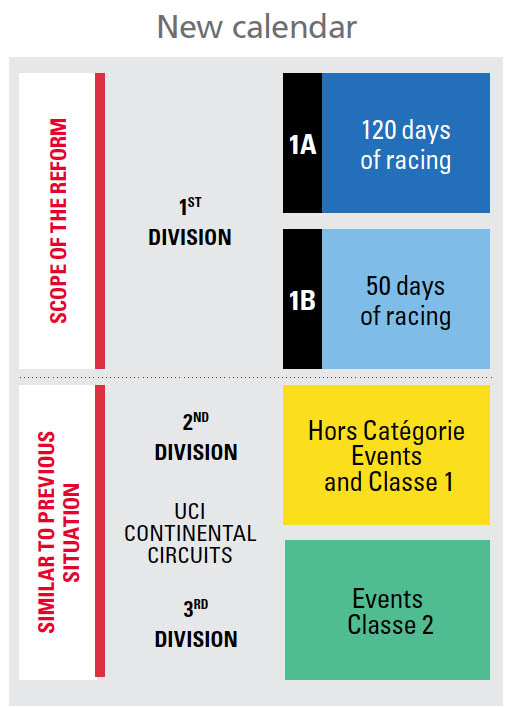 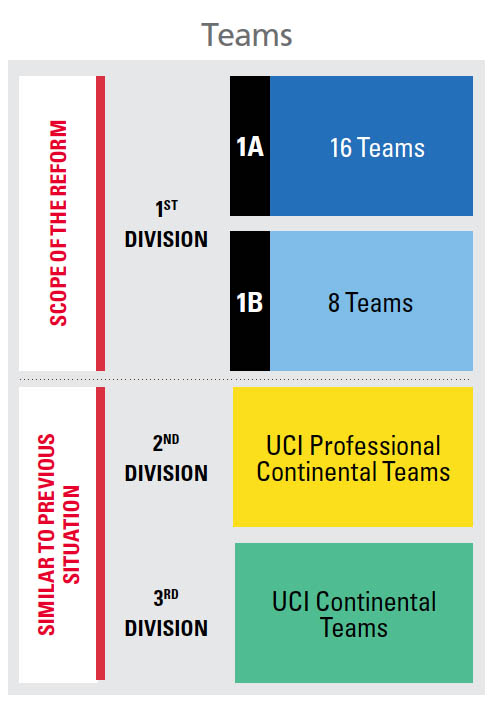 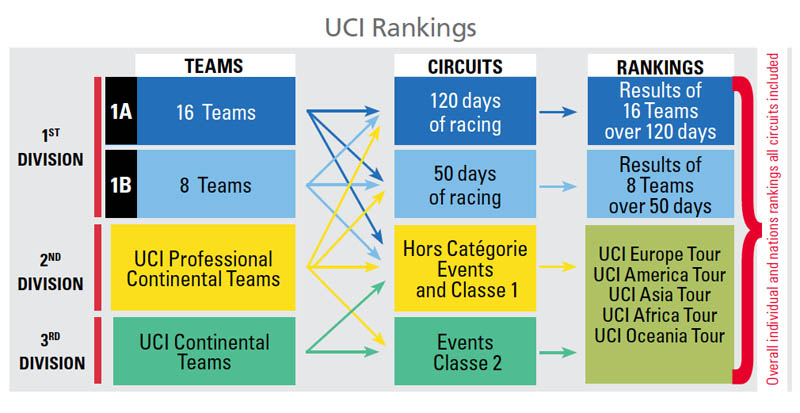 Now, this will all lead to a plethora of rankings.  The two First Division categories will have their own team rankings for the mandatory days of racing, plus the existing Continental Tour rankings will continue for Pro Continental and Continental teams.  Finally, there will be a 'Universal' Individual ranking, based on points attained in all events the rider enters (for example, when a 1B rider races in a HC event, or a Pro Continental rider gets points in a 1A race).  The Nation ranking will be determined from the universal individual ranking.

So, really, there are two important rankings - the Team ranking within each respective division, and the Individual ranking, which determines Nation ranking.  At this point, it is impossible to know what impact the new system will have on Nation ranking, since there are no details on the breakdown of points for riders in events at various levels.

For the First Division, once the new system is fully in place, the end of each season will see the last team in the rankings for 1A drop to 1B, and the top team from 1B move up to 1A.

The calendar will be organized to ensure that there are races every weekend - particularly on Sundays - with no overlapping of 1A and 1 B events.  In addition, the Spring Classics will be held over an uninterrupted six week period.

The current season will see no changes to the existing system of 18 ProTeams, plus Pro Continental and Continental squads.  For 2015 and 2016, the top 16 ProTeams in the WorldTour ranking will retain their status, while the remaining two spots will go to the highest ranked ProTeam or Pro Continental squads at the end of the previous season (based on points total for top five riders on each team).  In 2015 the universal individual ranking will be introduced, however, the team rankings will follow the existing process for each division.

In 2017, the top 16 ProTeams from the previous WorldTour standings will become the 1A division.  The remaining two ProTeams will become 1B, as will six other squads (by a to-be-determined process).  Teams will start participating in events based on the 1A and 1B criteria.  The following season (2018) will see the implementation of the promotion / relegation process for the bottom 1A and top 1B teams, as described above, which will 'fine tuned' over 2019 and 2020.

The reform documents have now been submitted to Professional Cycling Council for approval.