The Mid Island Velo Association (MIVA) , based in Nanaimo BC is a club with road, track and cyclocross interests.  In season the club holds weekly events including time trials, criteriums, road races and club rides.

MIVA 15km Time Trial - May 1st
MIVA time trial #3 went off in perfect weather - 20 degrees and no wind. A record number of participants - 27 turned up. The number of women was also a record with 10 starters. I the men's category, Don Gillmore won, posting a time less than half a minute outside his course record of 20' 16". Janna Gillick won the women's category with a personal best time which also gave her 5th. Place overall. In the male youth category, Ian Gillmore beat Aiden Hare by just 41 seconds while, in the female youth contest, Abigail Hare bested Meghan Gillmore by a scant 39 seconds.

Kudos to John Hannon for marshalling the turn.

Next week's event is the first 40 km of the year, with the option of 20 km for the youth and women categories. 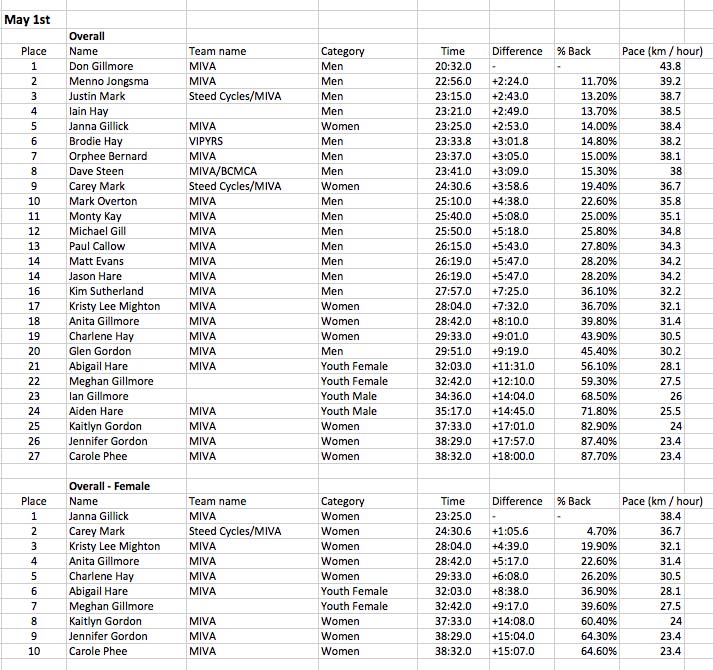 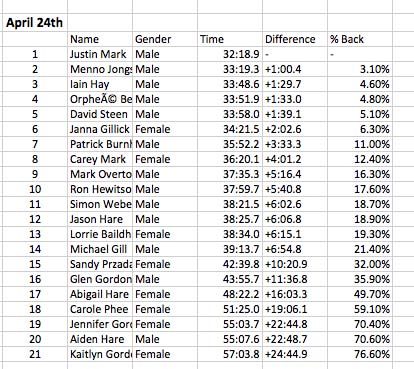 The event started quite slowly, with the riders sizing up each others' post-Winter fitness levels. However, the pace soon picked up, with all riders staying together for the first few laps.

Then several riders attempted to break from the group and a lap before the second sprint, Nick Kupiak (MIVA) opened a 250 metre gap. The fast-moving bunch tried to chase him down but Kupiak held on to win the sprint and then cruised back to the peleton.

Almost immediately, there was a surge by several riders to catch Nick and a split formed, with eight in the lead group and the other eight chasing. That's how it remained until the final lap and at the finish it was Iain Hay just edging Jongsma by less than half a wheel, with Justin Mark rounding out the top three.

The male youth category was won by James Grant (Vypers), who just beat team mate Brodie Hay, the duo finishing in sixth and seventh places overall. James' brother Mark was third in the category, placing second in the chase group.

Fifteen year old Jessica Reynolds (Vypers) found the pace higher than expected and as the only entrant in the youth women cat. Managed to stay with the main pack for a while when they lapped her.

Thanks to our volunteer marshals without whom the race would not happen. 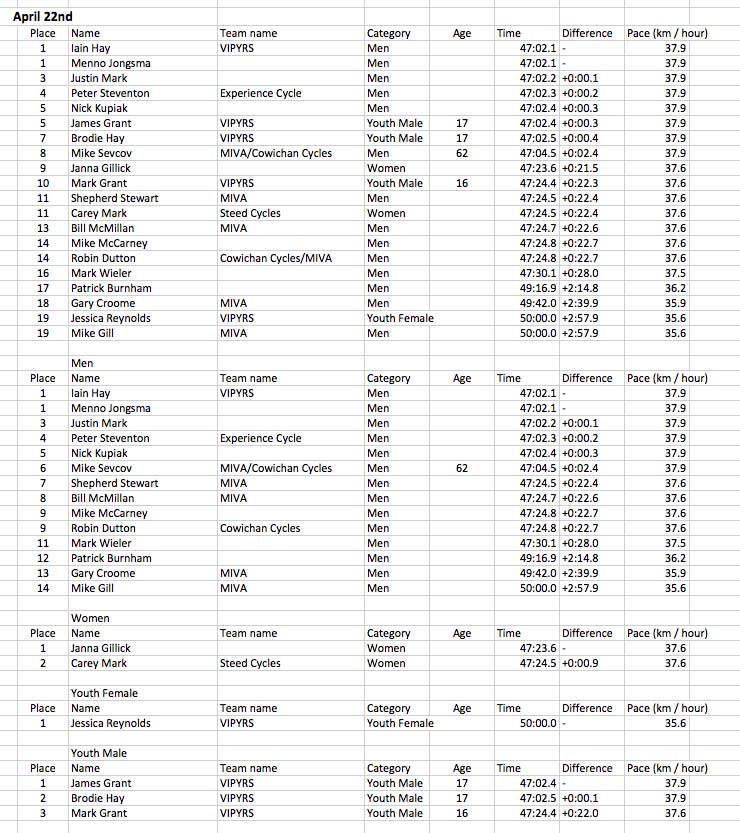 All reports by Peter McCaffery