Survivors of the polar vortex gathered at Woodnewton for the opening round of the 2014 Scott Ontario Cup mountain bike race series presented by Plastiglas.  Haley Smith (Norco Factory) of nearby Uxbridge secured her first ever victory in the Elite women's category, while national champion Derek Zandstra took top honours in the Elite men's division.

Despite plenty of rain in the days preceding the event, the course was perfect, the sandy soil dried out by strong winds the night before.  Cool temperatures and sunshine on the day made for ideal racing conditions.

"I knew that she was going to be fast and I tried to stick on her wheel," said Smith in reference to Montambault.  "Then I jumped her going into the first singletrack.  After that we rode together for a bit and I attacked on the major climb and I was able to get a little gap.  I knew that if I could get out of sight (I would be) out of mind so I just went for it and the gap stuck."

Unlike last year, when Montambault faded as the race progressed, this time around she was able to hold her position. 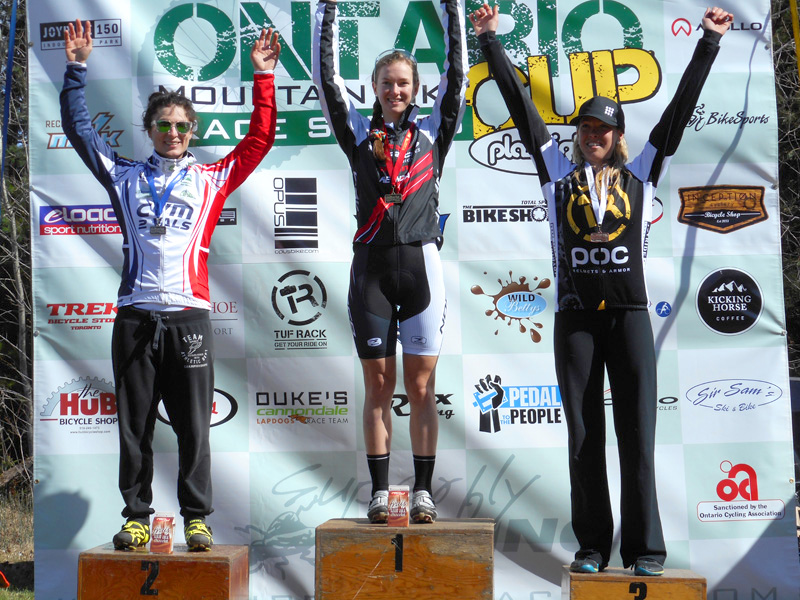 "Last year I didn't manage my start," admitted the resident of Val David, QC.  "I was trying to get in front very fast, but this year I didn't make the same mistake.  I stayed more calm and patient.  That's the key here in Woodnewton; to be patient for the entire race.  I tried to stay with her but she's very strong on the flat sections.  She was able to ride a bigger gear.  I was trying to get her on the technical parts but she was faster than me.  I just managed to stay in second.  I'm really pleased.  It's a nice race."

With Smith in control at the head of affairs, and Montambault holding her own in second, the focus turned to the final step on the podium.  Initially it appeared that Nadeau had it locked down, but emerging from the chasers was Dreyer, who steadily moved up to claim third.

"I was a little surprised off the start," stated Dreyer.  "Everyone had quite a bit of energy on the first lap but I'm glad to see how I made up ground during the race.  I definitely didn't get a super fast start but I just kept my pace and rode the best I could."

After a difficult 2013 season, Smith is looking forward to the new season.  "I'm in a good place physically as well as mentally.  I'm having a lot more fun on the bike than I've had before.  I was able to go south for the winter and I have a lot of training in my legs.  Yeah, I feel pretty good.

Even with the race well in hand, she kept the pressure on, riding the final climb like it was the first.  "Every opportunity to go hard is an opportunity to put more time in and get faster for the next race.  Plus I enjoy pushing myself so if I see a climb I'm going to go for it."

Elite Men
When the national champion shows up at an O-Cup, chances are good that all eyes will be on the maple leaf jersey.  So it proved to be for Zandstra, as he was quickly at the front, with a long line of challengers in his wake.  It wasn't a parade, however, and by the midpoint of the first lap the lead group was down to less than a dozen.

Due to a serious crash shortly after the start of the Junior Expert men's race, the starts of a number of Master Expert men's categories where delayed.  The various Master's groups did get going eventually, only to have the Elite's (who were now on their second lap) come up behind them while the Master's were on their opening lap.

Zandstra declared a cessation of racing, keeping his fellow competitors behind him while shepherding the group past the slower masters.  Once everyone who had been in the leading group was clear, hostilities resumed. 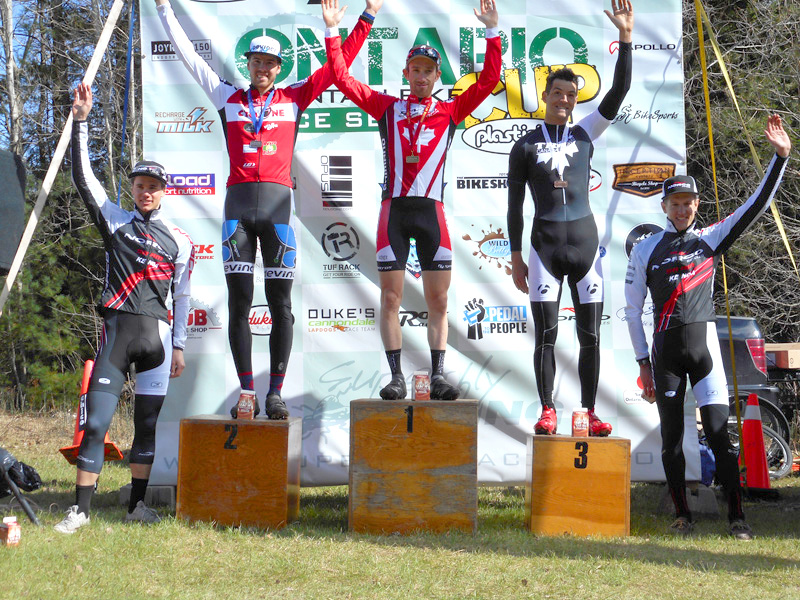 "Derek was keeping it together," explained Adam Morka (WFP Coaching/Trek Bikes).  "On lap three on the bottom half of the first climb, which was the hardest part of the course, I put in a little dig and split it into four guys."

From then on the race was on in earnest, with Morka and Bouchard pushing the pace.  The Norco teammates had to give way but Zandstra was biding his time, waiting until the closing stages of the penultimate lap before dropping the hammer.

"Yeah, they were pushing hard.  On one of the hills I decided it was time to split the group and see what everyone's got.  I attacked near the end of the fourth lap, just because some of the other guys were starting to punch it pretty hard.  I just counterattacked to get a gap and ride out the last lap."

With Zandstra riding away, Morka looked to Bouchard to take up the chase.  "I didn't want to pull on the top.  I knew if Léandre was strong I could sit on his wheel and ride along the top in his draft.  There was so much drafting on the top section.  But Derek was gone.  He's obviously in good form.  It's good to see.  It's fun racing when it's fast."

Bouchard was strong.  Not strong enough to catch Zandstra and repeat his 2013 win, but enough to distance Morka and claim the silver medal.

"I tried to do it again but I knew this year there were some big names that weren't here last year.  I was happy to have a good peloton.  I was feeling good and I'm happy with my performance today.  It's good to follow the Canadian champion and to have a strategic race.  It gives me confidence for the season."

The Norco contingent of McNeely, L'Esperance and Peter Disera rolled home in fourth, fifth and sixth. Having just completed his third year of mechanical engineering studies (full-course load) at Dalhousie University in Halifax, L'Esperance described his first mountain bike race of the season as "solid". 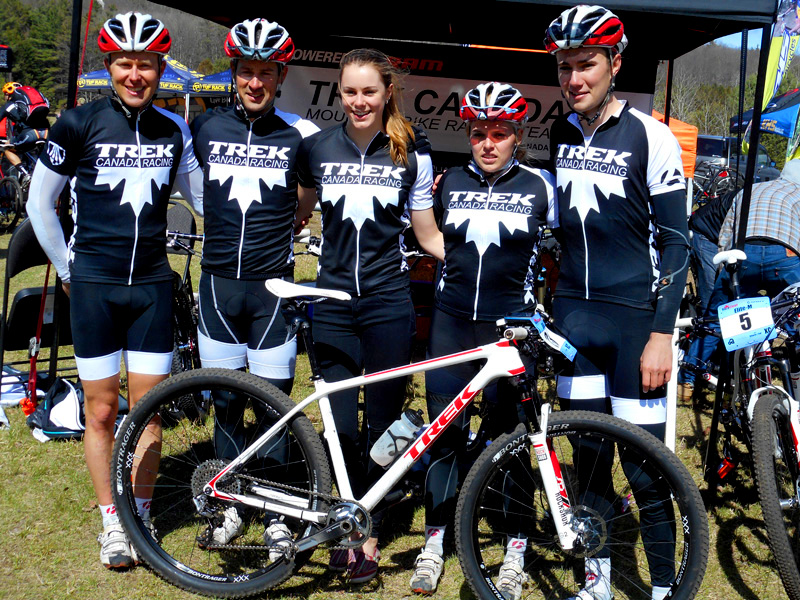 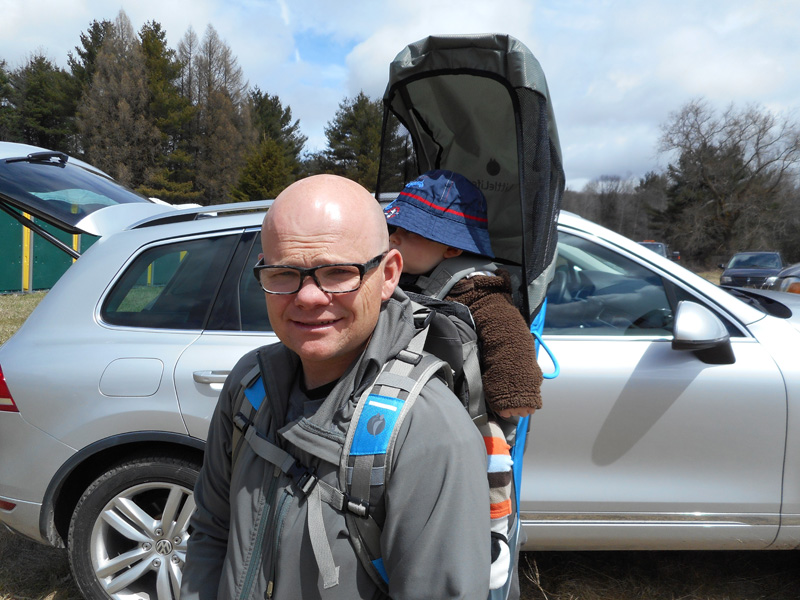 Adam Ruppel is the proud father of 8-month old Cole

Race Notes
- As the TufRack Racing team captain, Mandy Dreyer was understandably worried about her teammate Braedyn Kozman, who was taken to hospital after crashing at the start of the Junior Expert Men's race.  A severe cut to his knee was the main concern.

-Race organizer Sean Ruppel made a snap decision to move the starting line for subsequent categories ahead of Kozman's crash site, enabling racing to proceed as normal.  The start loop was not part of the regular course.

- Although it may have altered the race dynamic, L'Esperance in particular was complimentary of Zandstra's actions in neutralizing the second lap, calling it "professional."

- Anticipation is building for the Canada Cup at Mont Tremblant (May 17th). With no conflicting major races, L'Esperance says it will "basically be a national championship race".  Zandstra is also looking forward to the event. "It's been years since we've been able to go since it's always conflicted with the World Cups.  We've been fighting with them for years to try and change that.  This year we got lucky, at least for one event."

- Laura Bietola was unable to defend her race win of last year, not taking the start due to illness.  The Specialized Canada rider hopes to recover in time for Mont Tremblant.

- Zandstra generously returned his prize winnings, with instructions to Ruppel that the money be awarded to the Junior Expert Men's category at the Provincial Championships.

Full results all other categories