The 2014 Canada Cup season opened this past weekend in Mont Tremblant, Quebec with both the Cross-country and Downhill.  While it stayed dry for both days of racing, heavy rain leading into the event left the trails full of thick, sloppy mud, turning sections of the cross-country into a running course. 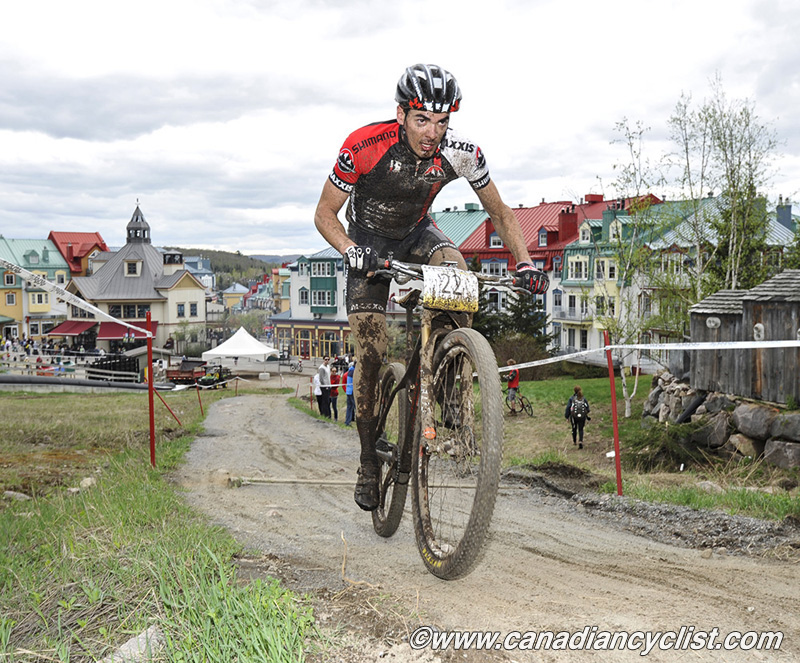 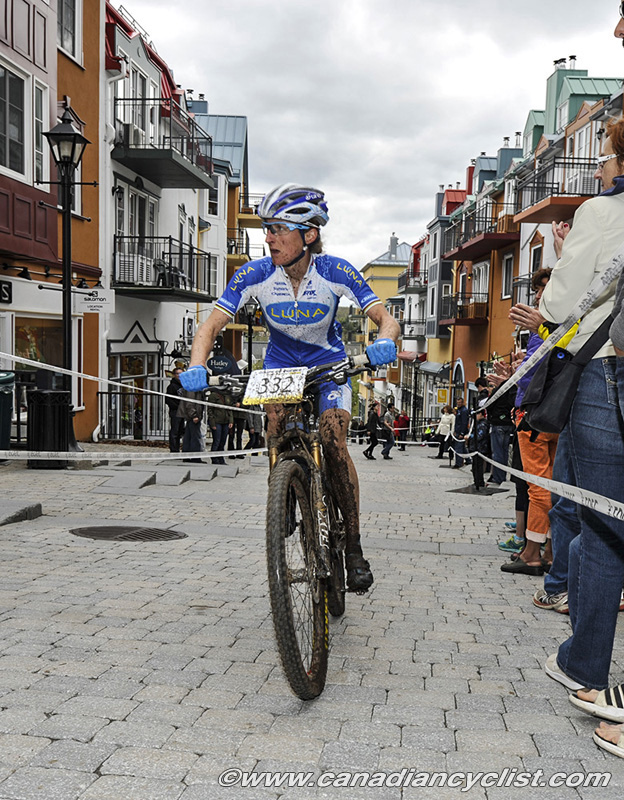 The Cross-country in particular had a very strong turnout, with some of Canada's top stars in attendance, including Luna riders Catharine Pendrel and Maghalie Rochette for the women.  Raphael Gagne (Rocky Mountain), who has had a very strong start to the season, and Scott-3Rox riders Geoff Kabush and Derek Zandstra were there for the men.  Unfortunately, last minute withdrawals by Marie-Hélène Premont (Rocky Mountain) and Emily Batty (Trek Factory Racing) meant that spectators were denied a showdown between all of Canada's top women.

The circuit was simple and extremely hard - a long steep paved climb up through the Mont Tremblant village, followed by further climbing on dirt and gravel, then a traverse of the ski slopes and a descent back to the base for the start of the next lap.  The conditions meant that the men only did four laps and the women three, and every rider was caked with mud after the first lap.

Gagne, who finished an impressive 14th in the opening round of the World Cup last month, showed that he has not lost any of the speed, opening up a sizable gap by the end of the first lap, which he extended to over a minute and a half by the third lap.  Leandre Bouchard (Cyclone d'Alma/Devinci), who has moved to the Elite ranks, chased alone in second for most of the race before Kabush overhauled him in the final lap with a massive surge that brought him to within 19 seconds of Gagne by the finish line.  Bouchard took third, followed by Zandstra in fourth and Evan Guthrie (Norco Factory) to round out the top-5.

Pendrel was similarly strong in the women's race, riding away to a solo victory over three and a half minutes ahead of Sandra Walter (Liv/Giant Canada).  For Pendrel it was the first race back since breaking her collarbone in March.  Andreanne Pichette (Opus/OGC)  passed Cindy Montambault (CVM 2 Vals) in the final lap for third, with Haley Smith (Norco Factory) taking fifth.

In the Junior Expert races, Laurie Arseneault (Equipe Iris) took an impressive win for the women, already opening a gap on the first paved climb and eventually winning by over three minutes ahead of Marine Lewis (Espresso Sport).  Felix Burke (Opus/OGC) was dominant in the men's race, finishing over a minute ahead of Marc-Andre Fortier (Quebec).